a smile and a stink eye- Halloween fun

Here is a quick video of Zoe enjoying carving her pumpkin at our friends Amanda's on the weekend. She loved it, and is soooo cute in this video (Zoe, that is-not Amanda)

I don't know what I did to deserve that stink eye, but Yikes! I love how expressive her face can be, going from that wide grin to that scowl in just seconds.

There will be more pumpkin/Halloween pictures to come- we just need to pick out the best ones. It's a hard choice- they are all super cute!

Posted by Gavin Ross at 5:05 PM No comments:

Zoe's great Grandmother (Gavin's grandma) died this weekend, at the age of 91 (I think). She had been ill a long time, so it was not unexpected, and apparently she went peacefully in her sleep. She lived in Davidson's Mains in Edinburgh until she was around 77, in the same house my dad and two aunts grew up in. The first memory I have is from the garden of that house when I was two. For the last 14 years or so she lived with my aunt Muriel, uncle Walter and cousin Zoe in Surrey, England.

We were lucky enough to get over there last year with our Zoe (or wee Zoe, as she is known to that side of the family) last year. Zoe was 6 months old at the time. My grandmother was still in somewhat good health (though rapidly declining) and she enjoyed visiting with her great grandaughter (her "bonny wee babbitty") immensely. I can't say I knew my grandma well, owing mainly to the fact that Scotland is quite a long way away from Canada, but I am very glad that she was able to meet Zoe and that they could spend some time together. It meant a lot to everyone involved, I think (though Zoe looks a little mystified, to be quite honest).

This video is, I guess, my tribute to my Grandma. She was a spunky old lady- I think there can be no argument about that. She lived a grand old life, and I'll miss just knowing she is there. I'm posting this video in the hope my family can see it, and remember how happy Grandma was to see her "wee Zoe".

The music is "Flower of Scotland"- this version by a band called Runrig. The other lady in the video is my cousin Zoe, who is only a few months younger then I am and a charming young women who was also absolutely thrilled to see "wee Zoe". 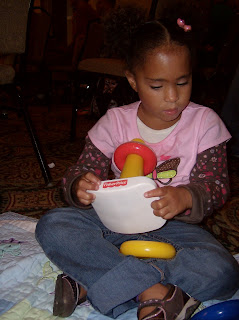 Sequoya playing with Zoe's FP rings. These were a big hit at conference. It was interesting to see how the kids played with the rings. All of the kids insisted on putting the smallest ring on first and then stacking the bigger rings on top of it. 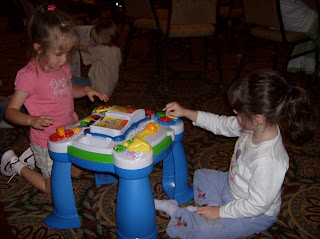 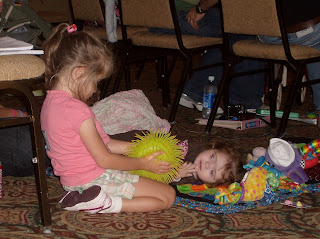 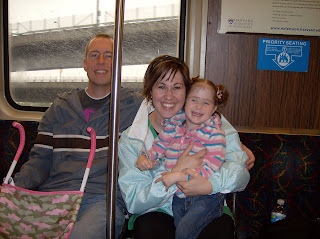 Nate, Melanie, and Whitney riding the T on the way to the aquarium. Whitney kept getting so excited, she would clap her hands. 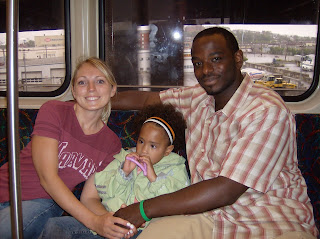 Elisha, Sequoya, and Carl. Someone on the train recognized that our kids looked alike and asked us if we were going to a family reunion. 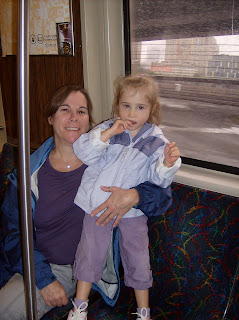 Kim and Amaya on the T. Amaya kept getting so excited she would flap her hands. 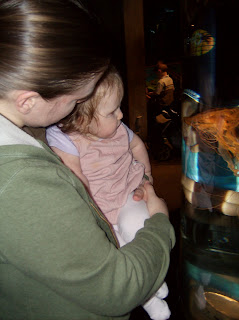 Genevieve and Zoe looking at the Jellies at the Boston Aquarium. Zoe did not pay much attention to most of the fish or the penguins since there was not a lot of contrasting colours. She did, however, love the jelly fish and kept trying to grab them.
These are just some of our many pictures taken this year at conference. We took some great footage of Zoe playing with the other kids, but unfortunately it turned out too dark since we took the video on our still camera. We are really glad we got to go again this year. We enjoyed seeing old friends as well as meeting new families. As I mentioned before, going to conference is a bit emotional since it brings forward the reality of what we will be facing with Zoe. However, the reality of the families we have met has been much less bleak than the reality we read in the articles when Zoe was first diagnosed. And we have learned so much from the other families on the list serve. So, we feel very lucky to have this support. If you want a run down of the conference speakers, check out Whitney's blog- the link is on the right. We look forward to going to conference again next year. We have decided that going to conference every year will be one of our family vacations. Although it is difficult at times to get that dose of reality at conference, it is so important for us to keep up with other families going through the same things as we are. There is such a bond between the 1P36 families since we are all in this together. We invite any of our family and friends to join us next year (or if you can't make it next year, you are always welcome) in Indianapolis the second weekend in August.
Posted by Genevieve Ross at 10:48 AM 3 comments: