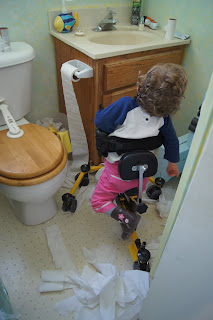 Zoe caught in the act. 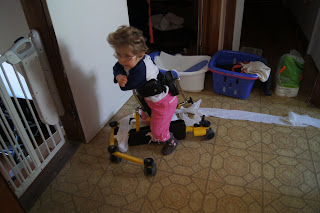 Zoe fleeing the scene of the crime.
The second new skill is that Zoe is now able to open kitchen drawers!!! For years we have been showing Zoe hand over hand how to open the drawer. She never had the strength and coordination to do it on her own and would frequently ask us to help her. We have been encouraging this skill since this is an important skill to develop. The other day Zoe walked right over to the drawer and opened it all on her own! She was very proud of herself and did a great job leaning away from the drawer so it did not hit her head. Of course now that she has mastered this skill we have to finally install child locks. Poor kid, she finally figures out how to open the drawers and now we are going to lock them on her!

Zoe and Ailsa have developed a really sweet relationship. It is great to see them rolling around together playing. Zoe will purposely roll herself to wherever Ailsa is. Zoe has done an amazing job keeping her legs still and not kicking Ailsa and being careful with her body. This shows tremendous control for Zoe who is naturally so wiggly and active. The girls have also begun playing with toys together. So far they are both good at sharing. 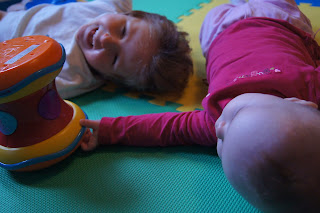 Taking turns with the drum. 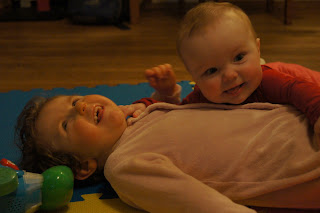 Rolling around before bedtime.
Take My Picture Too!

While I was taking a picture of Ailsa at dinner the other night, Zoe asked that I take her picture too. Then she kept smiling for the camera and signing more. She is such a funny girl. 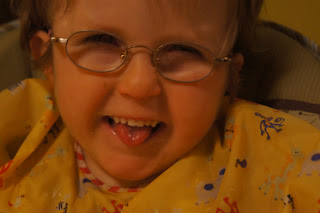 "Look at me, aren't I cute too?"
Namaste

I have been doing Pilates or Yoga every morning while Ailsa plays on the mats beside me. The other day I saw Ailsa watching the TV and when the guy said "Namaste" and put his hands together, Ailsa imitated him. It was very cute and funny. Overall, Ailsa has been much more interested in watching TV than Zoe ever was although recently Zoe has been more interested. We've decided to take the girls to the Muppet Movie since they both like watching the screen now. That should be fun. 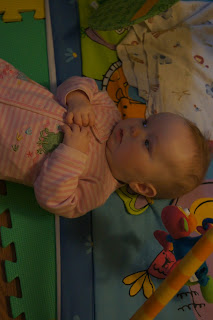 Ailsa doing her yoga while watching the TV.
Posted by Genevieve Ross at 1:07 PM 3 comments:

Ailsa decided to get a surprise for daddy (yes, that's right she thought it up herself, it is amazing how savvy our girls are at using our credit cards...) She bought us all tickets to see old hockey players get inducted into the hockey hall of fame and then play a game. The show also included a live band performance and a light show. Both girls were mesmerized by watching the game. Ailsa especially loved the laser light show. Zoe loved the popcorn! We brought Zoe's highchair seat so she could sit on her own in the stands. Zoe is able to sit and enjoy looking at things for longer periods of time now. We all had a great time and it was so nice having a fun family outing.

It all ended on a hilarious note when Gavin went to change Zoe who had a huge blow out bowel movement all over herself. I stayed in the seats nursing Ailsa who had been too distracted to eat during the show. After about 15 minutes an usher asked me to leave. I pointed out that I had too much stuff to carry on my own and that I was nursing my baby while waiting for my husband and other daughter. He disappeared and 5 minutes later a woman with security showed up. She approached me slowly while saying, "Mam, you have to leave now, this area is closed." I pointed out to her that there was no way I could physically carry the highchair, infant car seat, three bags, and the baby by myself and that I was waiting for my husband to return. She immediately looked more relaxed and said, "Oh, that is why you aren't leaving. No problem, I can help you." Apparently they had stopped Gavin from coming back to get me and asked him, "Are you with the woman who is breastfeeding?" Perhaps they were afraid I was staging a sit in! Security was very nice once they realized we were just trying to meet both the children's needs while carrying a lot of stuff. They even walked us all the way to the exit doors, how nice of them :)

The Day Got Even Better

While I gave Ailsa a bath, Gavin popped Zoe up and down out of Ailsa's eyesight. Both girls thought this was a hilarious way to play peek-a-boo. After giving us kisses and singing the goodnight song, Zoe headed off to bed while I finished bathing Ailsa. Ailsa looked right at me, signed "milk" (which is how she says mom). I said, "Yes, Ailsa what do you want? Do you want milk?" To which Ailsa very deliberately signed, "Zoe" and smiled. I called Zoe to come back and when Ailsa saw her, she immediately started giggling and again signed, "Zoe." Zoe was giggling and signing, "Ailsa." This was the first time Ailsa signed Zoe and Zoe was quite excited to see her sign. Zoe thinks it is hilarious when Ailsa signs. So far, Ailsa consistently signs daddy, milk, and Zoe. She is a very smart little baby although we can't convince her that my name is not milk...
Posted by Genevieve Ross at 11:32 AM 3 comments: 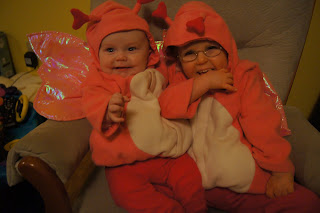 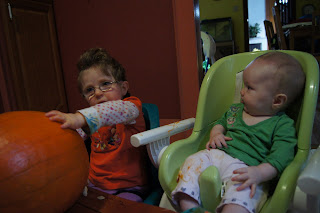 Zoe: Step one- get a feel for your pumpkin. 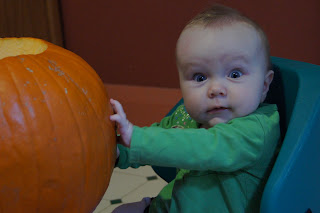 Ailsa: Yep, I see what you mean, sister. 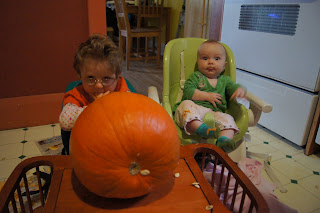 Zoe: Step two- think about how you want to go about this process while giving mom a stink eye for taking so many pictures....Hmm, Ailsa I think that is more of a sticking out your tongue look rather than a stink eye, but I think mom gets the point. 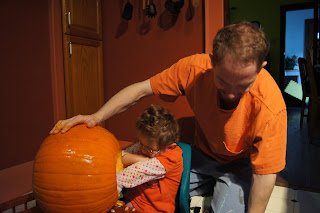 Zoe: Step three- dig right in there and get out all the goop and seeds. 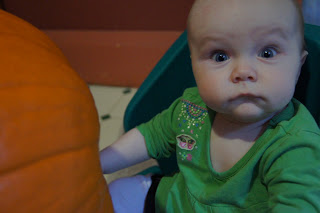 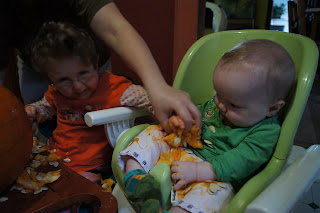 Zoe: Here, sister, take a break and have a snack while I do the work. 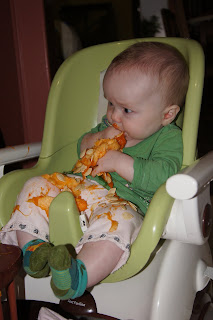 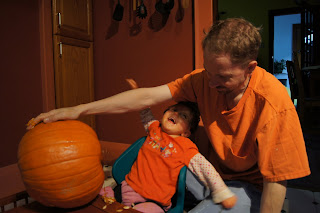 Zoe: The most important step is to have fun!