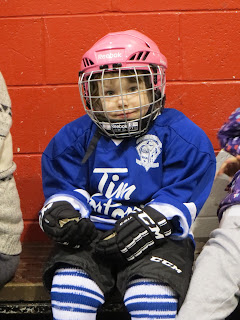 FYI- she ended up being number 8 because she was the eight kid on the blue team to pick up her sweater. Go Ailsa!  Go number 8!  Go Ice Raiders!

Ailsa is getting better all the time.  She can skate without the support bar now, but is a still learning  so she uses the bar at practice.  The practice mainly consists of the kids skating up and down the rink, sometimes doing drills, sometimes just trying not to fall down.  The kids are all very cute- the tiny little bodies with big heads, falling down all over the place.  Gotta love it.  It's easy to pick out Ailsa as she is the only one with a pink helmet.  And pink hockey tape on her stick.

Life Outside the Hospital is AWESOME!

I have hesitated to post it...afraid to jinx us.  I know, silly.  But life has been chugging along so well that I don't want it to end.  But we are having so much fun- we just have to share it!  Here is a glimpse of our life in the last couple of months with Zoe feeling mostly well.  A few little colds, bladder infection, etc but no major illness.  It is AWESOME! 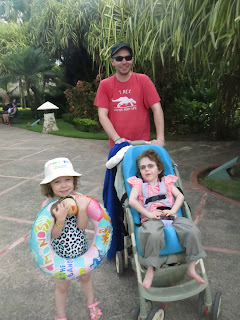 I have to type it- "Our life is so bright, we gotta wear shades..." 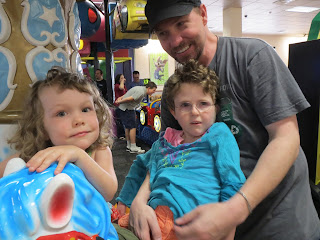 On the merry-go-round at Chuck E. Cheese 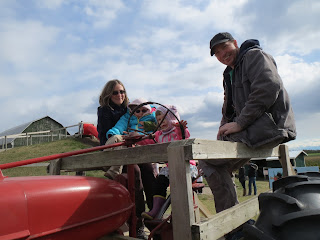 Trying out the tractor at the pumpkin farm.  Ailsa picked a nice, small, easy to carry pumpkin.  Zoe picked out a monster pumpkin and when I told her it was too big for me to carry she told me to roll it to the car and up the ramp! 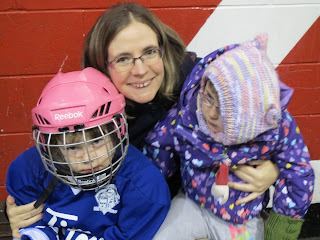 Hockey, hockey, hockey.  Every Saturday morning Ailsa's plays hockey.  And every Saturday morning, Zoe yells at us until we agree to take her.  Actually, even after we agree she keeps on yelling until we get her in the car, as if we are going to forget her!  The first Saturday, Zoe was cheering so loudly that Ailsa stopped skating and yelled, "Yes, I hear you Zoe!"  Zoe has been vocalising more and more.  She tells us she wants to use her mouth to talk like Ailsa.  Who knows, maybe some day she will.  For now, it is really great to hear Zoe using her voice.  She makes some pretty hilarious sounds.  And she is LOUD! 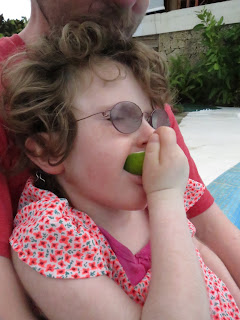 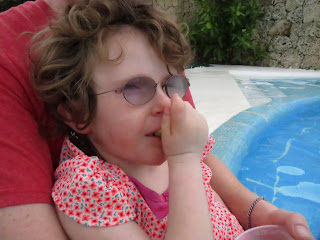 Zoe has been feeding herself more and more.  She has really learned how to manipulate objects with her small "contracted" hands.  She is great with food she can bring to her face and drop in to the palm of her hand while her lips grab it and she uses her fingers to push it in.  She is still learning what to do with sticky food like mashed potatoes, noodles, etc.  Shoving her hand in her mouth and licking it just does not seem to occur to Zoe.  It is fascinating to see her eating skills develop.

Overall, we have seen Zoe develop these last few months.  It is amazing how a few months of not being seriously ill allows Zoe to flourish.  She has gained a bit of weight (1kg/ 2.2 pounds) and this has made a big difference in her strength.  She walked all the way to Tim Horton's (a favourite restaurant in our neighbourhood) several times.  It is about .5km/ .8 of a mile away!  Zoe has also gained some upper body strength and can sit up tall the entire half hour horse ride at therapy.  All that muscle gain has been great for her core muscle strengthening- Zoe is able to have really deep coughs now.  Why does this excite us?  Zoe is able to clear more junk from her lungs.  Between chest physio, suctioning and Zoe's deep coughs we have kept Zoe's lungs clear of pneumonia so far.  She has had junky lungs since late September (this will never change- it is just how Zoe's lungs are) but so far we have kept the junk moving so it is not sitting and growing bacteria.  This is AMAZING!

Ok, maybe we have watched the Lego movie one too many times...  I know a certain 8 year old who will be very excited that a certain movie with small unintelligible yellow creatures is being released to DVD soon.  We have never actually seen the Minion movie but Zoe has been talking about it for months!  And it will give us a break from "Frozen"!  So it better be good!
Posted by Genevieve Ross at 9:48 AM 2 comments: