2016 was a pretty good year.  Actually a great year for our family since it was the first time in 10 years that Zoe was not in hospital overnight!!!!!  And everyone else behaved themselves too.  Gavin has been back at work for some time now and doing really well.  Considering all that his body has been through we have been incredibly lucky and we still continue to see gains.  Ailsa continues to do well on her kidney medications.  Her disease is progressing more slowly than they originally predicted.  And I am doing pretty well too.

Sooooo, since life is going so well, we thought we would pick up the dice and give them another shake and take a big fat chance again:


The girls came up with a way that they wanted to share our good news. 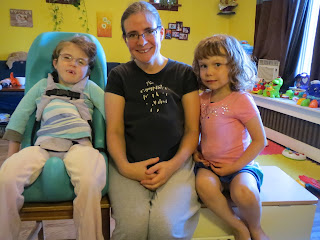 This photo was taken recently. 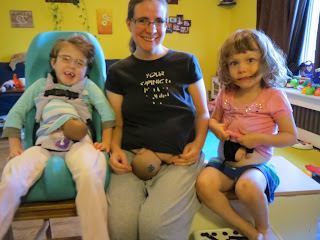 This photo shows what will happen around June 3rd!
To answer your questions-
Yes, we are pregnant!!!!!
No- it is not triplets.
Just one happy active baby kicking around in there.
We are all very excited! 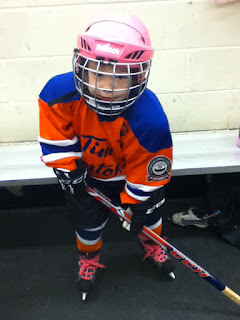 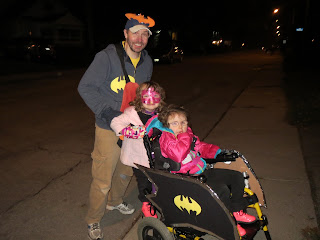 We had two Bat Girls this Halloween.  Gavin did an awesome job turning Zoe's wheelchair in to the Batmobile. 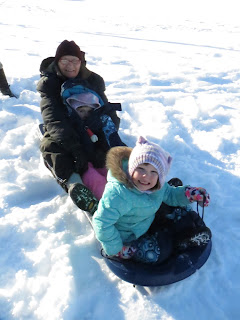 Grandma Sheena enjoyed tobogganing as much as the girls....ok maybe not as much as.  It's not easy walking back up that hill while pulling Zoe in the toboggan! 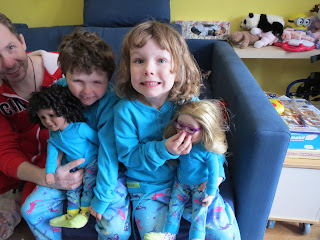 Christmas Day- the girls were very excited to get the Canadian Girl dolls they had been asking for since September.  Both girls have been consistent in which doll they wanted, which outfits, etc.  Not surprisingly the hockey outfits (with all the gear including helmets and metal skates that can actually go on ice!) were first on the list.  The Canadian Girls have to travel everywhere with us and Ailsa loves saying we now have four girls in the family.  Thankfully we have enough seat belts in the van! 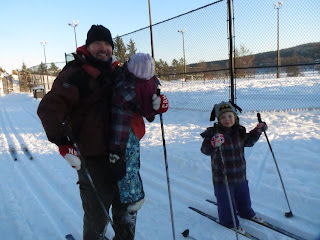 Zoe and Ailsa went cross country skiing for the first time during Christmas break.  We weren't able to get Zoe on the skis this time but she loved skiing with daddy.  In general, Zoe is not a big fan of cold weather but she does enjoy fast activities outside like tobogganing and now skiing.
Posted by Genevieve Ross at 11:00 AM No comments: