Here's to Hoping it's a Good Year! 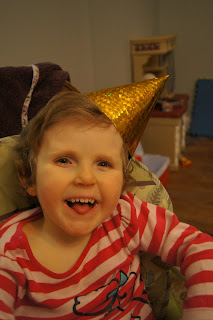 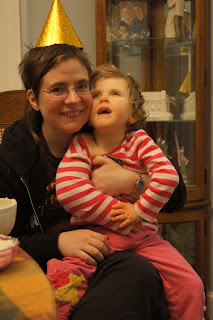 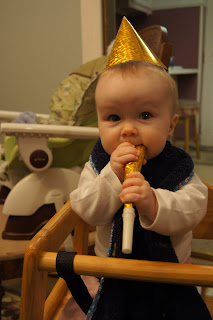 2011 Ended With Another Hospital Stay

We visited my brother and his family in Philadelphia for Christmas. After the 12 hour car ride, we were relaxing at Joe and Kristen's house and hoping to have a nice visit. Within the first hour of being there, Zoe broke her arm! Of course it turned out to be complicated and needed surgery. Surgery led to Zoe developing an allergic rash which looked like a burn and was extremely itchy. 8 of the 11 days we were in Philadelphia were spent at the Children's Hospital- not exactly what we had in mind for our holiday. 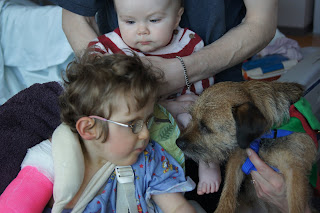 Christmas Day in the hospital.

Some Fun Time Too

Unfortunately, Zoe did not get to spend much time getting to know her cousin Sydney and Sydney did not get to see much of Zoe. The days that Zoe was out of the hospital, she was in a lot of pain and very unhappy. Ailsa did get to spend some time with Sydney and learned some important new skills from her like growling! Sydney quickly picked up Ailsa's "milk" sign and by the end of the visit she signed "milk" while I was nursing Ailsa. 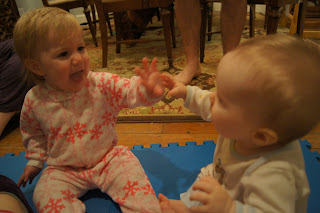 The last two days of our trip we were able to get to the park. The weather was beautiful and the girls had fun. 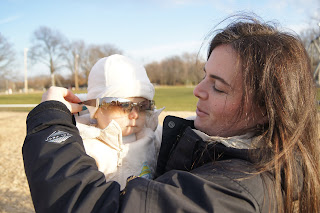 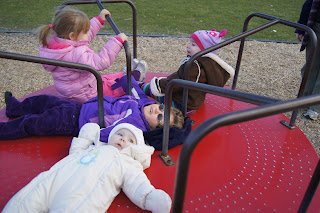 Zoe loved the merry-go-round but Ailsa wasn't so sure. 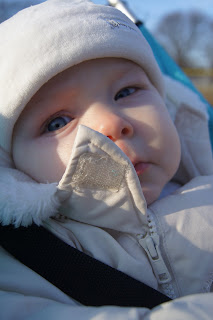 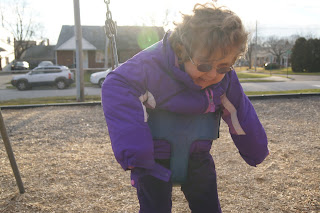 It has been a rough couple of weeks. Zoe was itchy from the rash and complained that her arm was hurting her. We were surprised she was still having so much pain until she had the cast and pins removed last Monday. They discovered that one of the pins had been rubbing Zoe's arm and had created a deep opening. Everything else looked fine but Zoe still has two small holes from two of the pins and one larger hole. She is much more comfortable now that the pins are out.

Zoe was in the emergency room last week with what looks like a gastro bug. We then had to keep her hydrated with NG feeds. Hmmm, so far 2012 is not shaping up as we would like it to be...

Zoe finally returned to school yesterday and had a good day. Today she was all smiles when she came home from school. It has been a month since she has been in school so I expect it will take a little adjusting to get back into the routine. Unfortunately Zoe has appointments at the hospital on Thursday so she will miss that day and school is closed on Friday. Perhaps it is good to start with a shorter week anyway while Zoe adjusts.

I am trying to keep this post brief but there has been so much going on. One last thing:

Ailsa still insists on signing "milk" to mean mommy. I don't mind, I actually think it is kind of cute. A friend was over the other day and Ailsa signed "milk." The friend said, "Do you want milk Ailsa?" Zoe signed "mommy" meaning "She wants mommy." Later, Ailsa was eating and kept signing milk. Zoe then signed "eat" meaning "She wants more to eat." It is amazing how Zoe picks up on what Ailsa means and is able to help others understand what Ailsa wants.

Sigh....I don't know why I should be surprised when I have the two most amazing girls in the world!
Posted by Genevieve Ross at 3:09 PM No comments: