This winter has been a hard one on Zoe.  She has been in and out of hospital since August.  In March we finally got a break.  Zoe had her longest stretch out of hospital since last summer- seven whole weeks!  Seven weeks actually felt like a long time since we had gotten used to a new crisis every other week.  We really enjoyed some good family time. 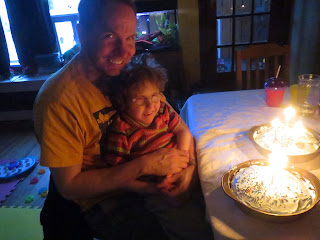 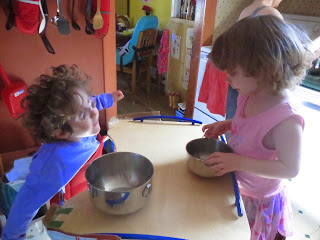 Big girls made the cake! 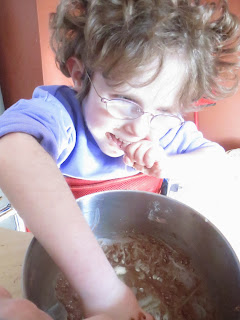 Of course, making the cake involves a lot of taste testing... 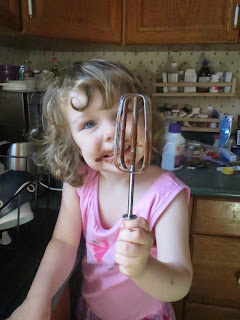 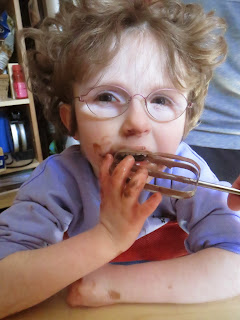 Zoe, who never had much of a sweet tooth, is actually enjoying sweets now.  She usually eats a few bites of cake and even enjoys a little ice cream these days.

For March break we went to Niagara Falls with our friend Angela and her family.  They have two girls- one just a little younger than Ailsa.  The kids had a great time playing and of course the hotel had an awesome pool.  The pool was part of an old outdoor courtyard they had put a sunroof on.  So even though it was cold outside, we got to go swimming among trees, plants and sunshine. 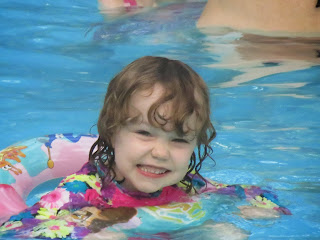 We were having so much fun that we did not take many pictures but here is a great one of Ailsa showing off in the pool.  This was the first time Ailsa was willing to float/swim on her own.  Normally, Ailsa clings to Gavin or me.  It is great to see her feeling more comfortable in the water.  As you know, Zoe LOVES water so I can see lots of time spent swimming in the near future.

Zoe has started getting infections that are harder to treat with oral antibiotics.  This is not surprising given Zoe's immune system, how much she has been on antibiotics in the past, and Zoe's allergies to certain meds.  She had some serious infections this winter that needed longer IV antibiotic treatment.  We have been attempting to have Zoe at home when on IV antibiotics but it has been challenging.  Zoe's PORT seems to get clogged very quickly these days.  When she is in hospital, this is not a problem because they keep a constant flow of saline going in to her veins.  At home Zoe gets her antibiotic once every 24 hours.  This works well as long as the PORT is flushing easily.  We have ended up in the emergency room a couple of times with PORT issues.  Sometimes they have to give Zoe the clot buster medication to get the PORT moving again.

Every once in a while Gavin and I have to take a step back and look at the big picture with Zoe.  Sometimes we feel like we are backed in to a corner when it comes to Zoe's health and we are left doing things we really rather not do.  When Zoe is home (like now) on IV antibiotics, we end up doing most of her IV care.  Before this year, we did not run Zoe's IV meds.  Now, if we want Zoe at home, we have to run her meds because things happen like- Saturday night Gavin and Zoe were in the emergency department getting the PORT to work, her med was given at 1am which means the next night the dose has to be given around that time and the home nursing agency says they can not send a nurse in middle of the night (which sounds like a bunch of bullshit to me but no sense going off on that one).  So it falls on us.  Which is fine in the sense we are more than willing to do whatever it takes for Zoe.  But it is kind of scary.  We are sleep deprived parents who are not nurses.  Ailsa had some sort of gastro thing all weekend and was up puking.  So here we are, trying to run IV meds for Zoe while taking care of Ailsa and monitoring Zoe since she just got out of hospital.  Zoe's PORT is not flushing well but we are told to just push it a bit.  Where do we draw the line?  What does that even mean?

As always, we take things one day at a time.  Right now, we are still able to handle things.  Zoe's care is becoming more complex with time.  Which means we either have to take on more medical interventions ourselves or advocate for more nursing.  Or have Zoe spend even more time in hospital.  Or see if Zoe could spend some of that time at a respite place that could run the meds.

All we really want to do it just take our kid home and leave all the medical sh$% behind.  We have been lucky to have some good nurses but it is difficult having people in our house all the time.  We just want to spend time as a family doing normal, exhausting family things- like bike riding to Tim's for lunch (which is exactly what we did today).  It took 3 1/2 hours with prep time, but hey- we did it!  The bike ride itself was only about 10 mins, but we had fun.

That is all we can do.

Ailsa turns 4 this Friday!  Wow, time really does fly by.  Ailsa is definitely growing up with a different perspective on life.  When Ailsa spilt some water the other day she said, "No worries.  We don't worry about water spilling, we have other more important things to worry about."  Ailsa does worry about Zoe but so far she is able to talk about what is on her mind.  It is amazing how much Ailsa picks up on and understands.  I know, I know here I go again talking about how amazing my kids are, but seriously- Ailsa really amazes me.  And while I love seeing what an empathetic and mature child Ailsa is, I love seeing her just kick back and be a kid.  Because that is what life should be about for her.  While Zoe has been in hospital, Ailsa and I have been eating dinner on the back deck and spending time swinging and going in the hammock.  Here is one of my favourite pictures of Ailsa in the hammock from the other day.  We are loving the warm weather! 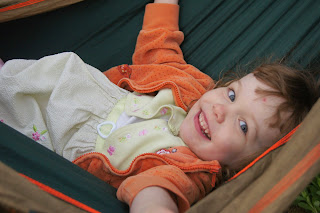