So it has come to this- months pass, I don't write, I don't call, I barely email and when I do it is usually just to announce another health crisis for Gavin.  Wow, we are lucky our friends are so understanding!

Another Round of Meningitis- It Was Fun the First Time...

Gavin ended up with bacterial meningitis again in April.  He had pain and was unwell for weeks before that.  In some ways he was relieved to know this pain was not his new baseline but another infection instead.  That was after he woke up on day 3 in the ICU after being out of it again.  This time I came prepared- I think the staff thought I was the crazy knitting lady.  I actually sat there and knitted while Gavin was in the resuscitation room in the emergency department.  What else is there to do?  Scream, cry, bite my nails?  Been there, done that and I have found it doesn't change a thing.  So might as well get comfy and get something useful done.

Again the ICU staff were amazing.  They were so compassionate and respectful of Gavin despite the fact that he was not able to be very cooperative because of his confusion.  They offered me drinks and encouraged me to take breaks.  They asked about the kids (they remembered us from November).

So now Gavin is home with his "beep beep" as Ailsa calls it.  He has a PICC line in his arm for IV antibiotics.  They ran all sorts of tests but never found a reason for the first case let alone the second case of meningitis.  They (and we) are worried there will be a third case.  So they extended the antibiotics but there isn't anything else we can do.  Just wait and see.  And wait some more...

The ICU doctor (who happened to be on the regular floor in November and therefore took care of Gavin before) said, "No offense but your husband's health situation is a bit odd."  I laughed and said, "You should meet my daughter!"

Zoe has been doing amazing!  She has had a fantastic winter.  Couple of pneumonias but no time spent overnight in hospital.  In fact, it has been just over a year since her last hospitalization!!!!  That is huge for us!

So what do we do with all our spare time now?  (haha)

Zoe started Hippotherapy- therapeutic horseback riding in January of this year.  We wanted to get her started for a while but she was not healthy enough until this year.  So far we have been impressed with the results.  We see an increase in Zoe's strength and stamina with standing and sitting.  She also is walking further in her outdoor walker these days.  It is like the therapy is waking those muscles up again so she knows which areas to target when trying to stay upright.  My insurance and birthday money Zoe got this year has covered most of the sessions so far.  I am looking into some funding so we can continue it for the fall.  Zoe does not participate in active physio sessions anymore.  The person at school is there more for helping get equipment in place.  Zoe is in a very physical program- constantly in her walker, stander or the Hopsa sling so she is getting that exercise regularly.  But we need to target those core muscles and get her sitting.  A whole world a mischief awaits her if she could sit up and scoot herself places! 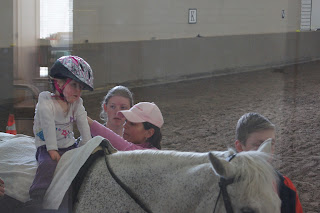 As you can see from Zoe's face- it is hard work.  Look how little support she needs to sit!  She can sit like this for 2 1/2 minutes now!!! 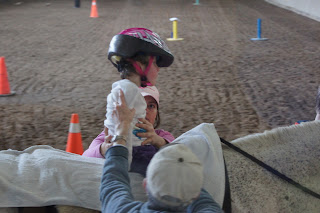 When the horse is moving, Zoe needs a bit more support.  She gets very excited and only lasts about 90 seconds before she has to lay down.﻿

Our life has been very focused on Zoe's health and now Gavin's health in the past few years.  So we are trying very hard to have some normal fun times with the girls.  It is important to us that the girls get to be kids and have fun.  Both girls are very empathetic and aware of things going on around them.  I never lie to the girls when Gavin is sick.  Obviously I tell them what is going on in a way they can understand and is not too scary.  But despite my best efforts, this last hospitalization was really rough on the girls.  Ailsa ﻿started to use a baby bottle (which is hilarious since she refused to use them as a baby!) and Zoe wants to see Gavin constantly to make sure he is still in the house.  It is amazing how much both of them are able to communicate about their feelings.  We encourage them to tell us how they are feeling and hope we can help them process that and move on.  Neither girl likes daddy's "beep beep" although Ailsa does talk about needing one herself.  These days when I flush Zoe's port, I have to pretend to flush Ailsa's afterwards.  And of course she needs a bandaid on her chest, just like Zoe!

Overall I know the kids are doing great.  They are both starting to settle down and will both be happier once Gavin's pump is gone (so will we!).  So in between these insanely busy and stressful health crisis moments, we make time for the fun and normal things.  Zoe had her spring concert yesterday and we all went as a family (plus grandad and Lyn came too at Zoe's request).  Zoe was an adorable baby dinosaur hatching from her egg which was mounted on her walker.  She had a seizure helmet on her head with an egg covering.  We might have to steal that idea for Halloween one year!

Here are some other great moments from the past few months: 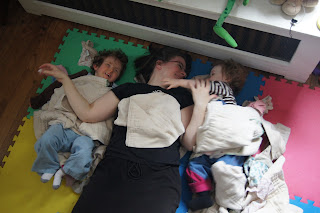 Who doesn't love rolling around in warm diapers, fresh from the dryer... 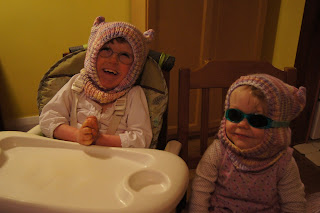 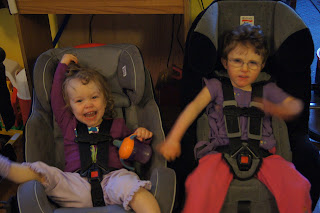 I love how the girls can have fun in such creative ways.  The car seats were in the house (I could insert a boring story about how the car broke down because when it rains...but I will spare you the details).  First Ailsa wanted to sit in her seat and then Zoe let us know she didn't want to miss out on all the fun! 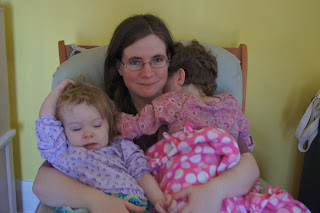 Zoe was sick this day and sleeping on my shoulder.  And of course, Ailsa decided she needed to hop up on my lap too.  Now if only I could convince the girls to snuggle in a bed and I could fall asleep too.  Seriously, they think beds are for jumping- thanks a lot grandad!
Posted by Genevieve Ross at 2:47 PM 2 comments: 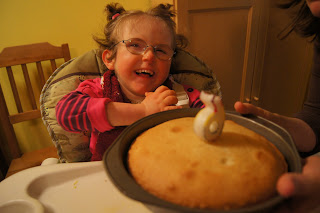 Ok, so Zoe's birthday is in February- but hey, better late than never.  Zoe turned six this year and we had a great birthday celebration at home!  Zoe loved when we sang to her. 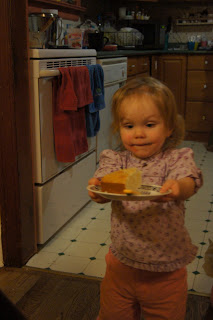 Ailsa was so proud to bring Zoe the first piece of cake. 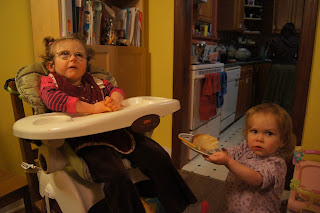 She was a little less sure when she realized she would have to give the cake up! 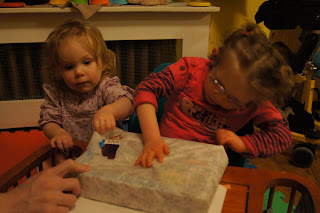 Zoe is such a great big sister- she let Ailsa help open all of her presents.
﻿ 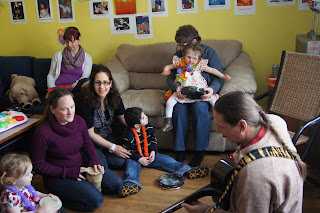 We had an amazing birthday party with friends and family that weekend.  Our respite worker, Alison (in purple sweater sitting next to Ailsa on the floor) brought a friend of hers as Zoe's gift.  He played music, brought instruments for the kids to play along, and even brought a parachute that was great fun for everyone.  The boy and mom sitting next to Alison on the floor are Matthew and Natalie.  Matthew lives near by and we have become close with the family because besides sharing the fact that both kids are really cute- Zoe and Matthew also happen to share 1p36. 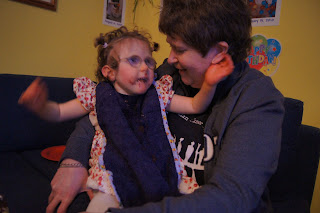 ﻿Zoe sharing her cake with Lyn.  It was so nice to have such a fun and happy birthday this year.  Lots of great memories.
Posted by Genevieve Ross at 1:22 PM No comments: