We have had a good couple of months- full of the good kind of chaos.  Lots of fun things happening and not as many medical appointments/ problems.  Here is a look at the last few months.

We had a great time at the farm picking our own pumpkins.  The pumpkin patch this year had a bad crop so we ended up walking a great distance through many rotten pumpkins before finding what we wanted.  And of course, as always Zoe picked a GIANT pumpkin and as always, daddy agreed to carry it for her.  Zoe did amazing walking around in her Upsee walker.  The Upsee is great when there is uneven ground because a regular walker would not work.  We got a new harness for it and now that it is more comfortable for Zoe, she loves using it again. 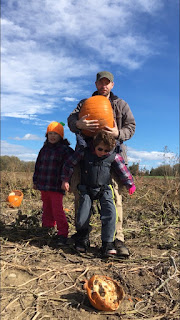 It was a Harry Potter Halloween here- Zoe wanted to be Harry Potter and Ailsa was Hermione.  Both girls were super excited about the robes and wanted to wear them constantly.  Willow was a cute little butterfly.

Ailsa started hockey again and of course everyone wants to go to every single game!  Zoe loves cheering Ailsa on but did get stressed when Ailsa was in goal.  Zoe was upset that pucks kept hitting Ailsa in the chest and head even though I reassured her that Ailsa was safe and not hurt.  She didn't like all those kids taking shots at Ailsa! 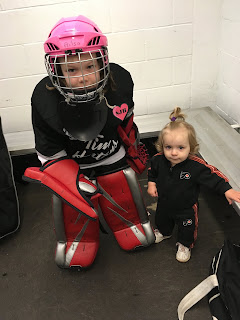 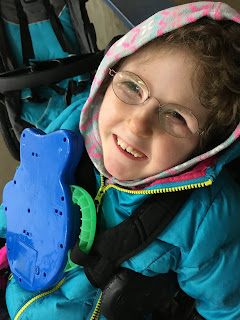 Zoe laughing and smiling in the stands.  Go Ailsa, Go! 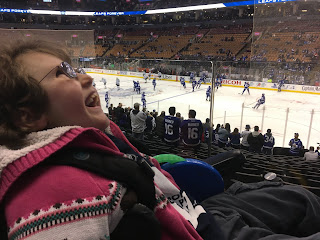 Zoe laughing and smiling at a Leafs game.  As you can see, when hockey is involved, the smiles just don't stop!  And if this was a video you would see Zoe waving and kicking the whole time.  It's not surprising she is tired after.
This game was a special invitation for Zoe and one parent (daddy went) from Coach Babcock.  Zoe got to meet the Leafs' coach before the game and then sit in seats donated by him.  I think the staff could see how much fun Zoe had at the game.

We were happy there was snow on the ground when we went to get our tree this year.  It always makes it feel more like Christmas.  As I type this, four days before Christmas, the snow has all melted and it has been raining!  But the girls did get to play a little in the snow at the beginning of the month. 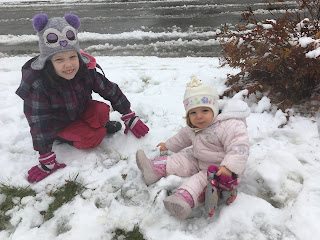 Zoe and Willow play in the snow while we pack the car. 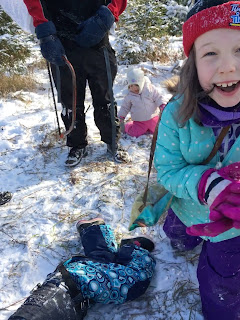 As always, Zoe rolls in the snow and in general is less excited about the cold.  Willow in the background isn't quite sure what we are doing in middle of no where cutting down a tree.  And Ailsa is loving every minute of it. 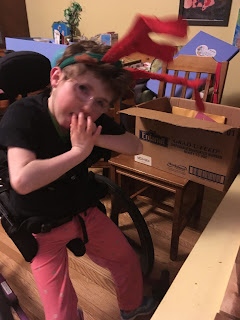 Zoe is not always a big fan of the cold, but she does love decorating the tree at home. Zoe is in her Kidwalk walker and doing an amazing job steering and using it, even in tight spaces. 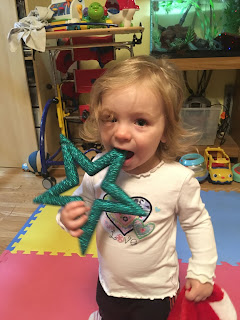 Again, I don't think Willow quite knew what to think about our crazy adventure and tree decorating.  But one thing was for sure- many of the ornaments were yummy!

And Now the Health Update for Those Who Want to Know

Zoe was having a lot of bowel issues in the Spring and Summer.  In order to deal with this, we had to start a daily bowel routine that takes about 90 minutes.  It has been an adjustment for all of us but Zoe has actually been doing amazing with it all.  And she is excited that she gets to poop on the potty every day.  She was able to do this occasionally before but now she is having success every day.  I won't get in to more details then that but if you are a parent whose child is struggling with chronic overflow diarrhea from constipation, I would be happy to chat more about what we are doing.  So far, it does seem to be working.  It took several months and one hospital stay to get it all sorted but we are seeing such a difference in Zoe- less pain, more energy, and a lot less blow out diaper changes.

Zoe continues to have immune system rashes every time she gets a virus or bacteria.  These rashes are so frustrating because Zoe already feels miserable, the last thing she needs is hives from her scalp to feet.  It usually takes about 48 hours to get the rash under control and it is very itchy and uncomfortable for Zoe during that time.  Sometimes her eyes swell up so much she can't open them.  We do have a plan that seems to help.  In the summer Zoe had to have IV steroids to bring the inflammation down but we have managed the last four rashes at home so that is some improvement. 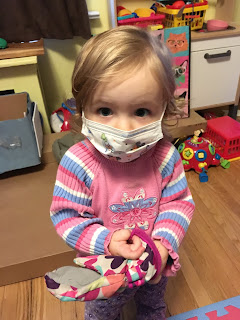 Every month we are flushing Zoe's PORT which involves us shoving a needle in her chest.  Because getting germs in to the PORT and her bloodstream is not a good idea, we have to use a sterile technique when we do the procedure.  Here Willow is putting on her mask and "sterile" gloves to help out. 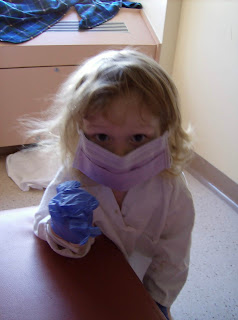 And this is Ailsa in November of 2013.  Perhaps we have two doctors or nurses on our hands?
Posted by Genevieve Ross at 2:58 PM No comments: