After noticing Zoe's love of music, our respite worker, Alison, has brought her keyboard and guitar a few times for Zoe to play with. Zoe has shown a real interest in keyboards lately. Interestingly enough, she only likes keyboards that sound like real pianos, not toys. It is amazing to watch her play. She has never just banged away at the keys but instead purposefully pushes the keys one by one while listening to what she is playing. She is quite serious about it and then all of a sudden will throw her head back and laugh. I guess it is time for us to look for a real keyboard since the little toy one we have is frustrating Zoe now that she has played the real thing. 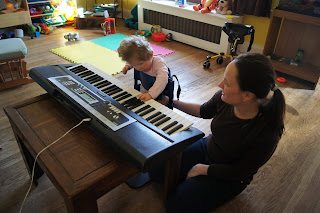 Zoe loves to feel my belly and wait for the baby to kick her. Once it does, she will laugh and laugh. There have been times when Zoe is feeling my belly and will sign "Baby sleeping." And I think, "It is?" Sure enough, Zoe is right every time- the baby is not moving and therefore must be sleeping! Of course when the baby kicks Zoe, she will often sign "Baby walking." Well she is sort of right- the baby is using its legs and feet. 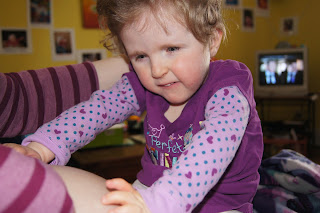 Zoe waiting for the baby to kick. 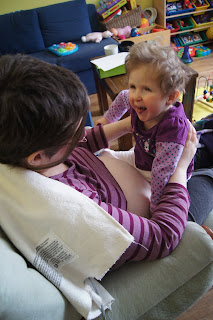 Zoe laughing after being kicked repeatedly. 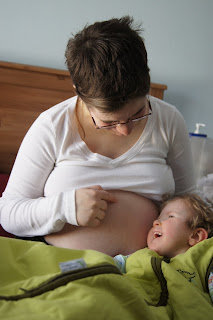 Zoe also loves talking to the baby. The baby usually responds to Zoe's voice and will kick away when she is talking or singing to my belly. 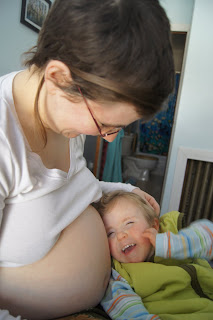 Zoe laughing and signing that the baby kicked her face.
Posted by Genevieve Ross at 11:10 AM No comments:

Zoe is feeling more like herself these days. She still has some tough behaviours going on like more arching, throwing herself around, and both of her hands are raw from chewing. She still has days where she is more tired and a bit cranky, but definitely smiling and laughing a lot more. She even told her first joke in three months the other day! Of course it, like most of her jokes, was making fun of daddy. I love this picture of her because she has this totally carefree look on her face like she is saying, "Isn't life grand?" 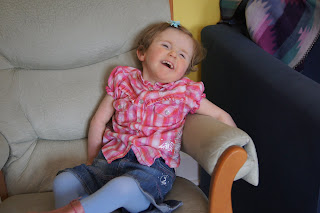 I can hardly believe my little girl turned four in February. Zoe was still having many tough days and nights so we kept it low key. We went swimming with just the three of us in the morning, back to the house for a nap, and then we went to Chucky Cheese for dinner. We had gone once before and Zoe seemed to enjoy it but did not really pay much attention to the robot Chucky. This time Zoe was fascinated by Chucky. Any time the curtain opened and he started singing, she wanted to pause in her eating and go up to see him. She played a few of the games but it was pretty crowded and she was tired so we didn't stay very long. It was a nice way for us to spend time as a family and celebrate.

A few weeks later, we had her school party. Zoe had missed a lot of school and was struggling with wanting to be at school when she was there. So we waited for her to feel a little better before having the party. Zoe is pretty much back to her old self at school now which is great. When I picked her up the other day she signed that she was all done with mommy and wanted to stay at school. Yup- that is my Zoe!

This year for the school party we decided to do something different than have ice cream like we usually do. All of the other kids love ice cream but Zoe never eats it. So Gavin had the great idea to try a cake made out of cheese (one of Zoe's favourite foods). The other kids were a little confused at first but then they seemed to really enjoy the cheese and cracker snack. And it was really rewarding for us to see Zoe eating the same snack as her peers and having a good time. 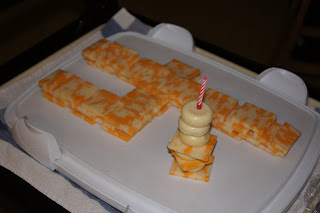 Gavin's "cheese cake"
Back to Walking!

Zoe is back to wanting to walk constantly and has even projected her love of walking on to her thoughts about what the baby is doing. According to Zoe, the baby is currently eating and walking inside mommy's belly. I wonder if she imagines the baby is walking around with a pony walker in there or does it ambulate on its own like her friends at school? We also started discussing how the baby will come out of mommy's belly and Zoe has decided that is easy- the baby will walk out! Hmmm, that sounds like a much more fun plan than what I was thinking... 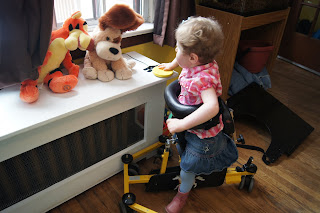 Zoe walking around the house and playing with her favourite switch toy. Oh how I have missed the sounds of "You know you make me wanna shout...." playing over and over again as she hits the switch!
Posted by Genevieve Ross at 4:29 PM 2 comments: