Last Days of Summer and School!!!!

After seven weeks of ongoing fevers, dealing with the PICC line, and monitoring Zoe constantly- Zoe finally started to feel better. Despite fevers, we decided to go to family camp at an Easter Seals camp. We had a great time and Zoe's fevers finally started to go away. The whole week was full of activities and there were tons of people willing to lend a hand. The girls had a great time and we plan to return another year. 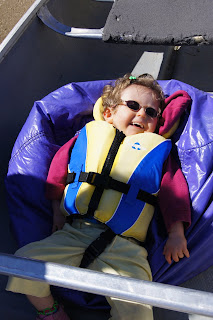 Zoe rode in a canoe for the first time! 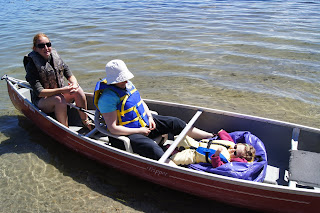 We were never sure how to get Zoe into a canoe but they had these bean bags at camp that worked great. Zoe and Gavin canoed over to the beach while Ailsa and I drove there. We played in the sand for a bit, visited with other families, and then we all had lunch there. After lunch, Zoe and Genevieve canoed back to camp while Gavin drove with Ailsa.

Zoe started at Sunny View school and is loving it! The teachers have a great way with communicating with us and we are all getting used to each other and the school routine. Zoe comes home excited and smiling every day. 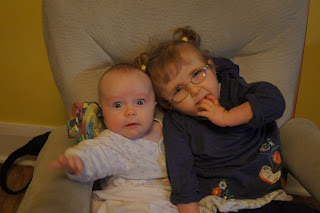 Zoe signing Ailsa on the first day of school. The only complaint Zoe has had about school so far is that she misses Ailsa and wants her to be her school friend. 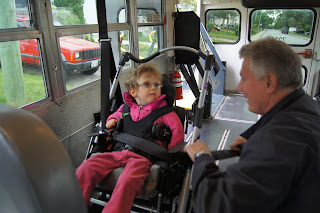 Zoe's first bus ride! Zoe gets picked up around 8am every morning and dropped off around 4pm. So far she has been coping well with the long bus ride. It helps that she is in love with her bus driver!

Why Can't Ailsa go to School?

It has been difficult for Zoe to understand (or perhaps she understands but wants a different answer) why Ailsa can not go to school with her. A few days before school started, I put Ailsa in the exersaucer for the first time. Zoe became very excited and was rapidly signing about Ailsa. It took me a while to figure it out but finally I figured out what Zoe was saying: 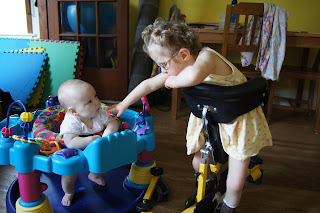 "Ailsa standing, Ailsa walking, Ailsa Zoe school friend."
Translation: "Ailsa is now standing which means Ailsa can use a walker which means Ailsa can go to school with me and be my school friend!" Zoe told me I was correct with the translation by smiling, laughing and repeating her signs over and over and over again over the next few days. When she gets home from school she still runs over to Ailsa to touch her hands and face and laugh with her. Hmmm, have you noticed I haven't posted anything about her missing Gavin or me?

After living here for five years and having permanent residency, I finally had a chance to take my citizenship test in June. It was actually the day before Zoe got really sick and I kind of forgot about it with everything that happened after. In late August I got a notice to appear to take my citizenship oath on September 9th. We decided Zoe would have a better day at school (they are not big fans of small children vocalizing, playing loud toys, and throwing those loud toys off of their trays during the ceremony). Gavin and Ailsa went with me and Ailsa was very well behaved- she slept through most of the ceremony and then was invited to sing the national anthem at the front of the room. I noticed they were picking all the cute people/kids for the photo op. So who knows, perhaps Ailsa and Gavin will appear in some Canadian Citizenship pamphlet or webpage somewhere. Which is kind of funny since neither of them was there getting their citizenship! 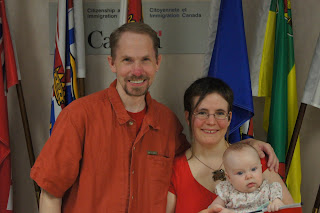 Look at those good looking Canadians!
Getting Better

Zoe has been feeling better, getting stronger, eating better, sleeping better, etc in the last couple of weeks. We went away last week to a cottage that someone has donated the use of to Sick Kids families. It was beautiful and so fun to get away. Zoe did such an amazing job walking at the Petroglyphs park- she walked 400 meters! We had an appointment with her complex care team today and we are all hoping for a healthy and happy winter.
Just One More Picture

I can't resist posting this one because it just cracks me up.... 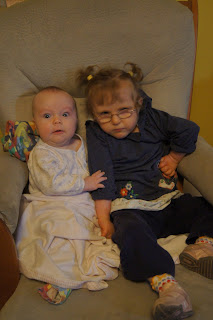 Ailsa: "Don't do it sister! She only tortures us with so many pictures because we are so cute and she loves us so much!"