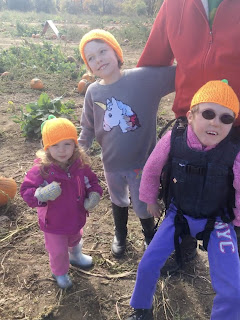 We went to Knox's Pumpkin Farm this year and it was great.  There is a $10 admission fee per person but they did not make us pay for Zoe or Willow (kids under 3 are free).  Everything was accessible except the pumpkin patch itself but they did have lots of pumpkins around for people who could not ride the wagon to the patch.  And they were nice pumpkins, not scabby small ones.  The corn maze was wheelchair accessible, as well as their walking paths and even their portable toilets.  Their barn (with lots of animals) was mostly accessible- just a small 2 inch step to get in and out.  And their staff were really friendly and respectful- they said hello to Zoe (as well as the other girls) and made eye contact while chatting with her.  We will definitely go here again next year!

It has been a busy couple of months.  Zoe is doing great now that she is healed from her surgery and things are starting to settle down with her bowel.  She doesn't usually have any pain from her stomach and bowels throughout the day!!!!!  And she does a great job with her hour long potty routine.  She is very proud of herself and enjoys being clean throughout the day.  Zoe has put on a little weight and she has more energy.  She is still waking at night with either pain or having a bad dream or who knows- we haven't sorted that out yet.  She usually calms down pretty quickly when she cuddles with daddy.  She settles with me eventually but she is (and always has been) a daddy's girl!

Zoe has had a smooth transition back to school this year.  She has the same teacher as last year so she started academic work right away.  Usually at the start of the year Zoe plays dumb and the teacher ends up having low expectations and Zoe gets a lot more free play time until the teacher finally catches on.  Zoe is not thrilled with being challenged right away but she really likes her teacher so I think that helps.  One big disappointment for Zoe is that her boyfriend (yes, I did say boyfriend) who was in her class last year switched to another class.  We all believe this is for the best for both of their learning but Zoe still gives her teacher a stink eye and complains about it frequently.  The teachers and nurses at school have all commented on Zoe being in a great mood every day and obviously more comfortable.  They are all excited to see this change.  And it confirms for us that Zoe is truly doing better, it's not just us being hopeful and seeing what we want to see.

End of Summer and Fall Trips

We always travel with Zoe, no matter how she is feeling but it was great to go on small trips at the end of summer/ weekends in September with Zoe feeling more comfortable.  We went to a cottage near Grandma's house in late August. The girls loved spending time with Grandma while canoeing, swimming and playing at the beach. 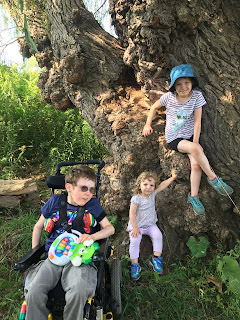 We visited Hamilton (where Gavin was born) and went to a beautiful park he used to go to as a child.  The girls enjoyed driving by his old house and listening to stories about his early childhood.  We even manged to see his old dentist's building- exciting stuff!  We stayed over night in a hotel where we enjoyed swimming.  The next day we went to African Lion Safari and had an awesome time.  It was really interesting seeing the animals in a more natural environment and seeing different animals interacting with each other.  We saw herds of elephants, zebras, giraffes, deer and caribou as well as lots of others. 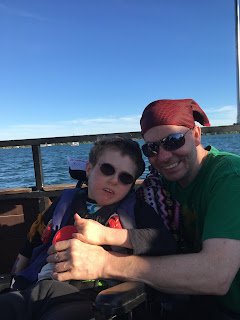 The Starlight Children's foundation had a cruise on a pirate ship in the Toronto harbour which was awesome!  It was a live theatre experience and the girls got to play along. 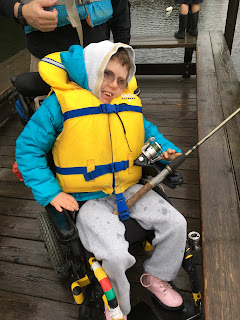 In September Emily's House (the respite place that Zoe goes for overnights) had the first ever family camp for children who are medically fragile.  It was amazing!  The camp was at camp Ooch (a camp for children with cancer) so the facilities were beautiful and mostly accessible.  There was early morning fishing one morning and we decided we were not going to do it since it would involve waking up early.  Apparently the girls had other ideas.  Zoe was up at 5:30am excited and ready to go!  The other two woke up soon after that. 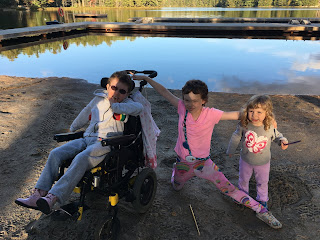 Another fun thing we did at camp was canoeing.  The staff (including Zoe's complex care doctor) were surprised at Zoe lying in the bottom of the canoe but this is where Zoe loves to be so she can feel the motion of the water.  Ailsa was excited to ride in a canoe with a staff member on her own and Willow was happy to sit tall and big in the seat next to mommy.  She even helped me paddle....it was so helpful!

There were lots of other fun activities including a wheelchair accessible high ropes course.  And Zoe was really excited to build a picture frame in their wood shop with her complex care doctor who she loves.  It was a great surprise to see he was one of the doctors at the camp that weekend.  It was great to have him see our family having fun and in a different context then the hospital.  This is the doctor who has been with us at some of the hardest times in our lives when Zoe has been so sick.  So it was really fun to interact with him in a different way.  And it shows him what we are talking about when we tell him about our various trips and fun outings.  I don't know if he really understood what that looked like for our family and how much joy Zoe gets out of it.

We really hope they have a camp again next year.  It was great being around children who have more needs like Zoe.  We have been to the Easter Seals Family camp (which is also a lot of fun) but usually Zoe ends up being the child with more disabilities and we are always running from one program to another and feeling a bit left out.  The pacing of this camp was perfect- lots of time for us to get our kids places, have time for changes in between and a med hut in the middle of the camp for easy access to medications.  And if a program ran over time, no problem- the staff would keep on going until all the children had a turn.  It was also fun talking to other parents.  While waiting in line on the beach Zoe was doing her usual coughing thing and the other parents did not stare at her with worried expressions that she was sick and spreading disease.  In fact, one mom said, "I'm so jealous of her cough, that is amazing."  Her son needs oxygen and does not have a productive cough like Zoe which leads to more lung infections.  So there I was, standing on a beach, on a beautiful day and bragging about my daughter's cough!
Posted by Genevieve Ross at 12:06 PM No comments: