Zoe turned 3 on Sunday!
It's hard to believe our little girl is three already. Time goes so slowly when we are in a health crisis but then just flies by. We turn around and suddenly, Zoe is three! Zoe's grandad came out for her birthday and we decided not to have a big party this year. With everything going on, we wanted to take it easy. So we just had cake and a couple of friends came over. (That doesn't count as a party right?) Zoe also had ice cream at school with her friends and we are having a party in Philly when we visit there next week. I guess that is 3 celebrations for a 3 year old. None of them a lot of work for us (which is a very good thing!) 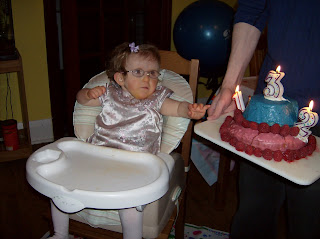 Zoe showed a lot more interest in her birthday cake this year. She really wanted to play with the candles while they were lit! 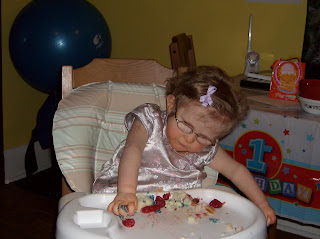 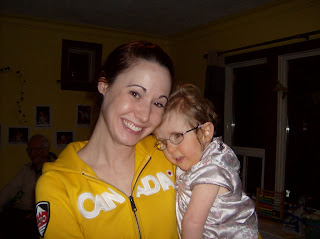 Zoe and Riann at Zoe's non-party. 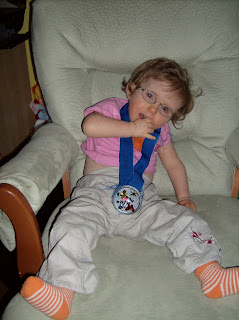 Zoe showing off the medal she made in school today. She is getting into the Olympic spirit. (Ok, this isn't a birthday picture but was too cute to leave out of the post).
Posted by Genevieve Ross at 7:29 PM 4 comments:

Zoe Back at School and Eating Well

Zoe returned to preschool for full days yesterday and today. I picked her up early because I knew she would be tired. Because she wasn't over tired, she did great with the car ride home. No screaming! We then had a lovely dinner. At first I thought, "I will just give Zoe jar food and cheese, she is probably too tired to eat anyway and Gavin is working." Then I decided to make us a nice meal and Zoe did great. We sat together, shared food, and Zoe did such a great job at using her signs to ask for more or indicate she was all done with something. It was one of those moments when I remembered why we all work so hard to have Zoe eat orally. She just loves food (when she is feeling well). She ate 1/4 of a cheeseburger, a few tablespoons of sweet potatoes, a few bites of cheese, AND an entire 7.5 oz jar of baby food. Followed by some prunes for dessert! The whole time Zoe was laughing, smiling, and signing. She also makes the funniest "mmmmm na mmmmna" noises when she is enjoying her food. It was so nice to have a relaxing afternoon where I could just play with my daughter, share a meal, and then put her to bed.

Now, maybe she will stay asleep and I can have a few hours to myself. This will be the first time in weeks...months maybe? that I have had a chance to relax by myself. So why am I typing here....I've got TV to watch and wine to drink :) Wow, that is an exciting Friday night!
Posted by Genevieve Ross at 7:34 PM 4 comments: 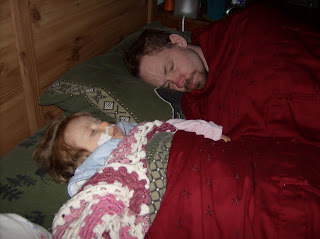 NG tube goes back in and Zoe is back in our bed.
After a whopping three days of feeling well, Zoe came down with a gastro infection. She couldn't keep anything down and was vomiting bile so back to the doctor's we went on Tuesday. The doctor gave us an anti-nausea medication that they give kids in the emergency room. It worked and Zoe only vomited once after starting the med. That night she drank the electrolyte solution pretty well (she was probably so thirsty after throwing up all day). Unfortunately, by yesterday afternoon she had not drunk or eaten much so she was getting seriously dehydrated again. She just didn't have the energy. Since Zoe never had a chance to gain back the weight or get well rehydrated after the last illness, she does not have any reserves. So we put the NG back in last night to give her the electrolyte solution. She is tolerating the feeds so far. We are trying to do everything we can to avoid going in to hospital where they would hydrate her via IV. Zoe is a really hard stick at the best of times but impossible when dehydrated. We have gone several times in the past for IV hydration only to find they can not get access to a vein. Or, after multiple sticks, they get the IV in but it lasts less than 24 hours. So, hopefully she will continue to tolerate NG feeds and will slowly increase her oral feeds again. Lyn (Zoe's respite worker) is coming over for a few hours today so I can get some sleep. Gavin is working a 12 hour shift at the hospital, so no rest for him! We hope (and maybe we will laugh at the naivety of this later) that Zoe perks up a bit today so we can bring her for a few hours of preschool tomorrow. I think it would be good for her to get out of the house a bit.
We are starting to feel a bit isolated and lonely here. Gavin pointed out that it has been weeks since we could do anything "normal" or fun with Zoe. We haven't even had time or energy (and she hasn't been up to it) to take a walk around the block or go on the swing in the back yard. We see other parents out our window bundling kids in their snowsuits and playing in their yards (we just got a little snow). It is difficult to explain the emotional impact of that on us at a time like this. It would probably be dramatic (although somewhat accurate) to say it breaks our hearts.

I had a small breakdown on Monday and Gavin had one on Tuesday.

But then we took a deep breath,

told ourselves to suck it up,

rolled up our sleeves,

Posted by Genevieve Ross at 8:34 AM 4 comments:

We try to make working on Zoe's goals fun for her. Zoe got a toy in this box at Christmas and she loves sitting in the box and picking up one packing peanut at a time to drop on the floor. She actually does some great sitting in this box. Plus she is working on her fine motor control as she picks up and drops repeatedly. 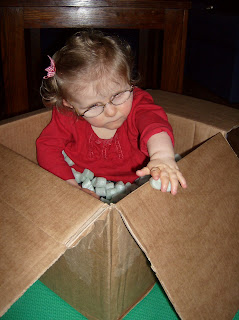 Look at that dropping skill! 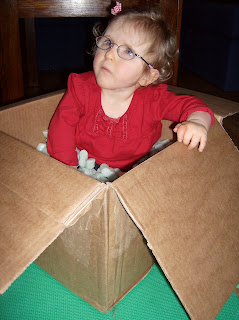 And I love how she looks up to say, "Who me? I wasn't dropping things on the floor!"
Posted by Genevieve Ross at 12:20 PM No comments:

Zoe on the Upswing

First, I wanted to post that Zoe seems to finally be on an upswing from this latest illness. After three weeks of fever and cough (she is still coughing some but definitely getting better) and a few days of NG tube feedings, Zoe does seem to be feeling a lot better. She did a half day at school yesterday as was so excited to be there. Gavin tells me that Zoe was like a celebrity when he brought her in. All the kids crowded around and wanted to talk and play with Zoe. She of course just ate it up and was smiling and laughing up a storm. I dropped her off this morning for a full day so hopefully she makes it through the day. If not, they will page me and I can pick her up early. The daycare is a five minute walk from my work, so it is very easy to get to her fast.

This past illness Zoe showed a lot more signs of being uncomfortable and in pain than she has in the past. It was really hard seeing her so unhappy for so long. She is usually so easy going. I think the high fever is what made her so miserable. I don't blame her- I would be way more grumpy than she was!

Gavin says that Zoe only weighed 18 pounds (she was almost up to 20 pounds before this latest illness) at her appointment the other day. We are hoping most of that will come back quickly. She has her three year check up soon and we are hoping to see her at that 20 pound mark! We don't stress about Zoe's weight like we used to. We know that she is growing and healthy and will be as big as she is. We know she gets enough to eat (when she isn't sick and we have to resort to tube feedings to keep her hydrated). So the weight thing has become a joke between us. Last appointment Zoe was 19.9 pounds and we were like "Come on Zoe- only .1 to go!"

Unfortunately, Zoe is having some major sleeping issues these past few months. Initially we thought it was because we had a guest staying in the house (Gavin's dad was here for several weeks). But Zoe has continued waking up, screaming in the night. Of course she woke up a lot when she was sick due to her fever going high and her feeling miserable. We are still hoping that since she is feeling better, she will start sleeping better. I wonder if she is having night terrors or sleep disturbances. This is quite common in children with neurological differences and most of the other 1p parents say their children have sleep issues. It can become a real issue when the child is older and able to climb out of bed. For now, even when Zoe wakes screaming at least we know she is safe in her bed and hasn't fallen out.

My excuse for posting is to give an update on our most recent appointments.

MRI- met with Neurosurgery on Wednesday. Zoe's syrinx from her T8 to L2 is still there, it has not changed. She does now have another collection of fluid in her cervical vertebrae. We were hoping to be told the syrinx has shrunk or stayed the same. So, not so happy to hear there is more fluid. But we were reassured that as long as Zoe is not showing any symptoms, surgery should not be necessary. He checked Zoe's reflexes (which she usually does not have a typical response to but never has) and her muscle tone in her arms and legs. His concern is the the new collection of fluid could affect her arm/hand control. Due to Zoe's weak muscle tone it would be hard to tell which is muscle and which is due to a syrinx. Despite this, the doctor was very impressed with Zoe's strength. And he kept commenting on how amazed he was at Zoe in her walker. He did not even recognize her initially. We, of course, are quite proud of how mobile Zoe has gotten so we purposely brought the walker in for him to see. We also know it is important for him to see if her leg function is being impaired at all.

Ophthalmology- saw the doctor 1 1/2 weeks post tear duct plug insertion. He says that Zoe's eyes look less dry already and is happy with how it looks. He is not sure of his long term plan for Zoe if these plugs fall out (which they frequently do). But I guess we just have to go with what is working for now. He even reduced the eye gel from four times a day to just once! Zoe does well with getting the gel in her eyes, but once less thing to remember three other times in a day is a nice break for all of us.
Posted by Genevieve Ross at 11:41 AM 1 comment: