It's been a rough couple of weeks but Zoe is starting to feel much better now. She had some ongoing diarrhea issues and then either got hit with a second wave of the same bug or a new bug and ended up with high fevers, vomiting, and lots more diarrhea. Which made it very hard to keep Zoe hydrated enough. By last Saturday, Zoe was starting to get pretty dry and we were worried because she had crying/screaming and signing that her lower stomach area hurt. We were worried it was more than a stomach bug so we took her to see the doctor just to be sure. Thankfully, it was just a stomach bug and after five days of rehydrating with NG feeds, Zoe was feeling much better (as you can see in the picture below). We are still feeling exhausted from days without sleep but Zoe seems to be fully recovered today. She even made it to school for Thursday and Friday this week, which of course made her very happy. She is napping longer than usual today (which is why I finally have time to update her blog) but other than that, she is back to her silly, smiling self.
Having the NG inserted really upset Zoe this time. We don't know if it was because she was feeling really lousy or just really pissed. She kept signing "daddy" and pointed at the tube while shaking her head no. (It was Gavin's turn to insert the tube and this time Zoe was going to make sure he knew she didn't like it!) We laughed because even days later Zoe was calling it the "daddy tube." Ah well, I have no sympathy since the sign for vomiting is still "mommy" while gagging or sticking out her tongue!
Zoe actually removed the NG herself by accident this time. We were planning on running one last feed and then pulling the tube, but Zoe pulled it while playing. She was then very upset and would not calm down until I figured out that she was upset that we would put the tube back in since for days I had been saying, "Zoe, don't pull on your tube. If you pull it out, we will have to put it back in." Once I reassured Zoe that she was done with the tube and we would not put another tube in, she happily played in her bath and forgot all about it. It still amazes me how much she does listen for a 3yo! 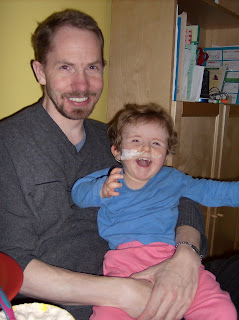 Zoe and daddy after a few days of feeds and Zoe began smiling again.

Before Zoe got sick, she was doing some really exciting things at meal time. For a long time now, Zoe has grabbed inedible items (sand, paint, pumpkin, etc) and put them in her mouth. Any time we would offer her food (other than a cracker or baby mum mum), she would immediately just throw it on the ground. In the last few months that has finally changed. Zoe is really interested in dipping her hands in her food and licking it off. She also shows great interest in using a spoon and holding her cup by herself. We are very excited to see her self feeding skills begin to advance. 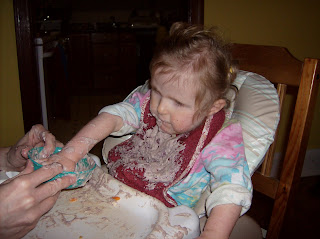 As you can see, feeding herself is very serious (not to mention messy) business! 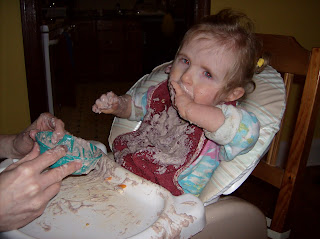 Zoe has even adapted a side swiping gesture when she gets the food to her mouth since her mouth is too little for her to insert her whole hand like most kids do when learning to finger feed. It is amazing how she has adapted to her very small hands and is able to manipulate objects and do what she wants.
Posted by Genevieve Ross at 3:07 PM 2 comments:

Hope you enjoyed Halloween as much as Zoe did this year. Here's a video of some of our Halloween fun.