We tried out a surfer bather hydraulic bath lift but we have found it is not a good fit for us. It was great at lifting and lowering Zoe into and out of the bath but since the lift weighs as much as Zoe and we do not have a second bathtub, setting it up is as much work as lifting Zoe. From trying it out we did figure out that we do want to look into a bath chair as an option at this point. Zoe is still not able to support herself at all in the bath and has started a behaviour where she flings herself back in order to drink the water. Kids at this age typically try to drink the water but since Zoe is on her back she ends up choking and aspirating on the water. Which is not a good thing! So we are waiting to try out some different bath chair options.

Zoe just started at a rehab centre. She will now go there for therapy rather than the therapist coming to our house as they have done until now. We are excited to start this next phase of Zoe's therapy because we know it will be more intense and push her more. We are a little worried that this will be very hard on her. But we know that it is good for her in the long run.

During Zoe's assessment for the rehab centre it has become quite obvious that her therapists have not been pushing her as much as they should have. And we knew this for the past little while but since Zoe had such a rough winter we didn't want to push her too much. Since Zoe has been sick, we focused on other goals like communication, social, and walker skills. We know that we are amazing parents and that Zoe has grown so much but still we do feel guilt that we did not push her more with physical therapy. Does any parent not feel this guilt all the time? No matter how much you give your kids, it never seems like enough. As a parent, you want them to have it all. So we try to sit back and see how far Zoe has come. And the reality is Zoe would still be very delayed physically no matter what. She was far too sick most of this past year to have much energy for focusing on gross motor skills. It is actually amazing that Zoe is doing as well as she is considering all of the challenges she faces every day. 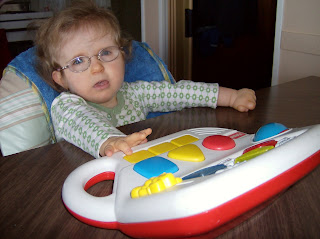 Zoe is finally big enough to sit at the table like a big girl to play or eat. She is quite proud of herself. She even signs "Zoe proud" when she is especially proud of herself these days. It is amazing how she is starting to pick up on social expectations/ pressure. She had to go to the back of the line at school for pushing and she was very upset about it. She kept signing "Zoe" with a sad face when the teacher was telling me about it. I guess she learned though since she hasn't pushed in line since then. We are encouraging her to feel proud of herself when she does the right thing by telling each other about it, "Daddy, Zoe wants you to know that she turned the light off in her room all by herself" or "Zoe wants you to know that she helped pick which vegetables I should chop up first for the stir fry" etc which results in Zoe smiling and signing "proud."

Oh no- what would our Scottish relies think! Great Grandma Ross already warned us, "She's a bonny wee babity but don't tell her she is so bonny or she will get to be too proud." 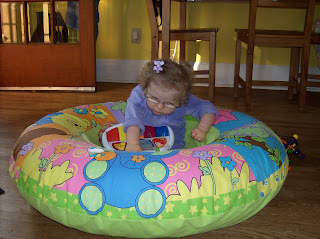 Erin (Shelby's mom) gave us a bunch of Shelby's old clothes and this blow up donut thing. At first we thought this would never work for Zoe (she keeps flinging herself backward). But we are trying it out to work on sitting skills. It seems like we have been working on sitting forever but we try to remind ourselves it has only been 2 1/2 yrs. Zoe still can not sit on her own at all so we are hoping this will give her practice time to build strength and muscles she needs for sitting. 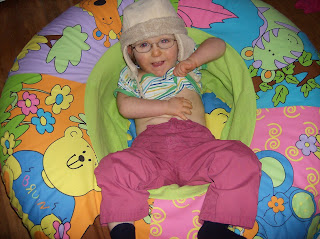 And Zoe thinks it is quite fun to lay in the donut as well! Daddy thinks her new hat is fun too. We also go one with jiggly bells on it and Zoe thought it was hilarious when she moved her head and heard the bells jingle. 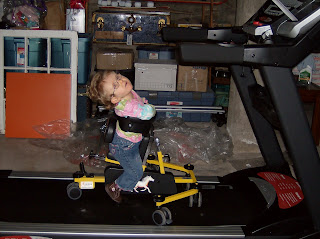 Daddy and mommy got some new equipment too! Zoe was checking out our new treadmill. It has become obvious that we will never have time to leave the house in order to exercise and so we invested in some exercise equipment. We have been enjoying the time together to catch up on our day while exercising after Zoe is in bed. And we keep each other motivated. Lifting and caring for Zoe is really starting to put a strain on both of us physically so we know it is important to make sure we stay in good shape. Plus it is a great stress buster at the end of a hard day.
Posted by Genevieve Ross at 8:59 PM 2 comments:

"Going to cottage" is a very popular holiday plan for many people from Ontario. We planned to camp this September but never made it there so instead we decided to do the traditional cottage experience since camping in October can be a bit chilly. We were quite pleased with how relaxing a trip it ended up being. We went to Gananoque in the 1000 islands area. 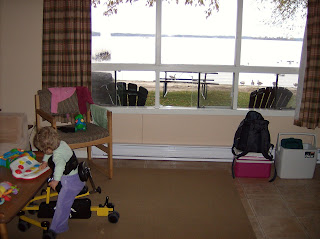 I took a long time researching cottages to find one that Zoe could easily use her walker in. This cottage was great because the scenery out the front window was gorgeous. We were right on the river with our own private beach. 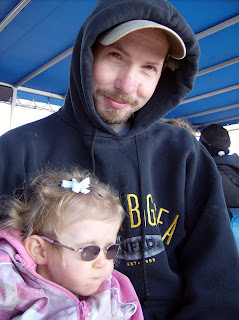 Zoe sits with daddy while enjoying her first cruise. 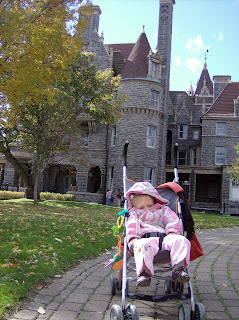 Zoe tuckered out from storming the castle. 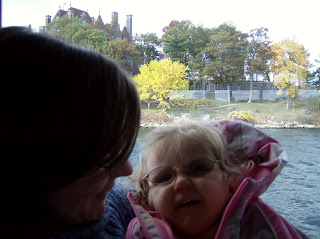 Zoe laughing with mommy on the cruise ride back to the cottage. 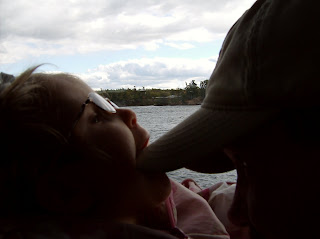 Zoe was getting a bit tired by this time but luckily daddy brought a toy that was both entertaining and yummy! 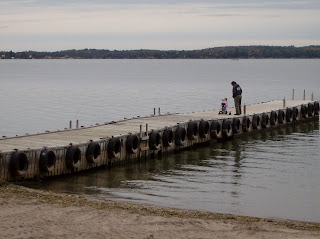 This is the pier that was right outside our cottage. Zoe did a great job walking up and down it every night. It gave us a chance to get outside to enjoy the scenery. And we were amazed that Zoe did so well walking on uneven ground. She did get a little frustrated at times because she couldn't understand why she couldn't go swimming. 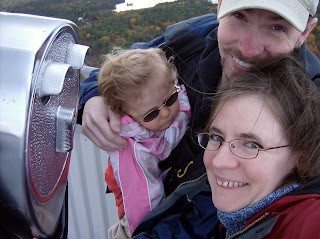 Family shot while sight seeing at the top of the 1000 islands Skydeck on Hill Island. Zoe's favourite part of this day trip was walking in the bathroom and the elevator. Doesn't Zoe look too cool for her parents with her new transition shades? 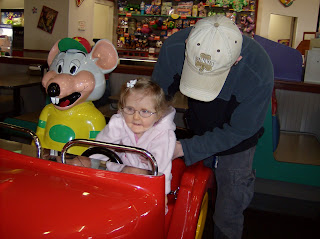 Last stop on the way home- Chucky Cheese! It wasn't quite as fun as mommy remembered it being from when she was a kid. But it is a great place to bring a kid like Zoe. She got to ride her first merry-go-round, she loved this car that bumped up and down, and she really liked licking the skee balls! It was a great place for her to be able to run around in her walker and get to pick what she wanted to do. 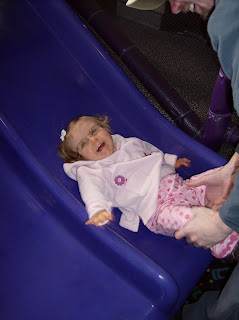 Zoe's favourite part of Chucky Cheese was the slides. It is actually quite a work out for us to put her at the top and catch her at the bottom but that smile is well worth the effort.
Posted by Genevieve Ross at 8:20 PM No comments:

I was having a conversation with Zoe about how I have not been feeling well lately. Working in the field that I do I know how much kids pick up on when we think they are clueless about what is going on. As if that was not enough to prompt me to make sure that Zoe knows what is happening, her teacher asked me how I was feeling when I dropped Zoe off yesterday at preschool. I had stayed home from work last Friday and Gavin took Zoe to school so I figured that is why she was asking. But she elaborated and said that Zoe had seemed worried about me and was signing "mommy" and "hurt" at times. And so I had this conversation with Zoe today:

Genevieve: "Mommy hasn't been feeling very well but she is seeing doctors so they can help mommy feel better. Hopefully mommy will feel better soon. But you don't need to worry about mommy."

"Oh, are you going to give mommy kisses to help her feel better?"

"Oh and playing will make mommy feel better too. Kisses, milk, and playing. Anything else?"

Laughing I say, "Yeah you are right, sleep would help too. So is that what mommy should do, get lots of kisses, milk, playing, and sleep?"

"Yes, you are right Zoe. I think those things would make mommy happy."

So there you have it- Zoe's prescription for happiness:
kisses, milk, playing, and sleep

Sounds good to me!
Posted by Genevieve Ross at 7:25 PM 3 comments: