Zoe had surgery three weeks ago and everything went very smoothly and her recovery has been better then we had expected.  The surgery itself took 2 and 1/2 hours instead of the 4-6 we had been expecting.  Because Zoe has a long appendix (something we did not know until she was in the surgery since the appendix is not something you can see on any images unless it is inflamed from infection) the surgery was less complicated because they were able to connect her appendix to her belly button area without making a passageway.  So the procedure involved less moving things around inside and less stitching.  Perhaps I should say what procedure she had so that you can see what I am talking about.

Zoe had a MACE procedure. MACE stands for Malone Antegrade Continence/Colonic Enema (or just plane Malone) and it is surgery.  Malone is the guy who perfected the procedure, Antegrade means moving forward, the C stands for Contience, which is the goal or Colonic which is the part of the body (colon) involved, Enema is introducing fluid to clear out the bowels of poop. The MACE surgery involves bringing the appendix to the belly button to create a stoma or a surgical opening/hole. Usually this hole is hidden in the belly button. It is tightened inside so that fluid can go in, but nothing drains out.

For over a year we had been doing everything we possibly could to address Zoe's severe constipation.  At one point we were giving her enemas (through her bum) twice a day with lots of laxatives and still she was constipated.  Why is constipation a problem?  Firstly, constipation causes chronic pain for Zoe.  She is in pain even when she is not trying to have a bowel movement.  And she was having pain every single day to the point she was not sleeping well, she would just cry and cry even if we held her and tried to comfort her.  Second problem is that because Zoe was not emptying her bowels properly, there was pressure on her bladder and constant small loose BMs in her diapers which led to urinary tract infections (also known as bladder infection).  Zoe had over a dozen infections in the past year and was critically ill because of several of them.  And lastly, did you know that constipation can be a seizure trigger?  We didn't realize this before but we know it now!

Zoe was part of the discussion about various ideas/ solutions for her constipation and she was so excited to get the MACE.  She is still excited every day even though we are still adjusting things so she is still having bowel issues.  But- the constipation is finally clearing up!  So at least that pain is better for Zoe.  Now we are just tweaking what combination her body needs so she can have one single BM a day on the toilet.  What an exciting prospect!

How Is It Going Now?

For now, Zoe continues to have pain every day because she is still healing from the surgery.  Also, she has a catheter sticking out of her belly button that shifts and moves at times and I imagine is not always comfy.  That catheter will be removed next Monday and then we will only put the tube in to do the enema on the toilet and it will come out right after.  So instead of shoving a tube up my child's butt every day, we get to shove one in her belly button!  The joys of parenting I never even imagined for myself...

It is so hard seeing Zoe in pain.  She is not a person who complains and she has a high pain tolerance so when she is crying, it is just heart breaking.  Although Zoe is bored recovering at home and taking it easy, it is what her body needs.  So most days we are home all day long. And I am beginning to feel like Zoe- cooped up and in pain.  Pain from watching her struggle still.

However, I also know that pain will continue to be a part of Zoe's daily existence.  She does amazing coping with pain and has always done so but I guess my mind still hopes for that magic fix that makes it so she can have more good days then bad.  And who knows, maybe this MACE will turn things around and the good days will be more frequent then the bad days.  They were that way up until a few years ago.  It is so hard to even get a handle on what Zoe's baseline is since she is constantly battling infections so she is always coming down with something, sick with something or recovering from something.  But I know getting on top of her bowel issues will be a push in the right direction.

When we had Zoe, we had no idea she had any issues until the moment she was born.  As soon as she was born (5 pounds, 3 ounces at 42 weeks gestation) it was obvious something was amiss.  Those first weeks, months were so busy and scary and exhausting.  When things slowed down Gavin and I began to understand how people talk about grieving the child you were supposed to have, grieving the healthy child, etc.  Because Zoe's issue is her chromosomes and her chromosomes literally make Zoe who she is, I can not begin to separate out where 1p36 ends and Zoe begins.  And so I can truly say I would not change Zoe even if I could.

Having said that, I still grieve sometimes for what could have been.  Every birthday, every new milestone missed, every hospitalization I feel the pain of wishing Zoe did not have these medical issues.  Sure- keep the 1p36 but make her one of those less affected kids who are less disabled and healthier.  But, that is not Zoe.

Gavin and I have always tried to let Zoe be a kid and do normal kid things.  As she has grown bigger, stronger and more medically complex this has become harder and harder to maintain.  But- we persevere.  Because really, what else is there to do?  What else can we do with our "one wild and precious life?"

The week before surgery we went camping in New York in the Niagara Falls area.  We try to camp every year with my brother Joe and his family (from Pennsylvania) and my cousin Elena and her family (from Massachusetts) but the last two years that did not work out.  So we were very excited that camping could happen this year.  And even more exciting- my brother Paul and some of his family drove out from New Mexico to join us and my sister Kathy and some of her children and grandchildren drove out from St Louis to join in on the fun.  So we had almost 30 people between our 5 campsites!  It's a good thing I booked us in a more isolated part of the campground.  We were not a quiet group!

The kids had so much fun running back and forth between campsites.  We had fun sightseeing with everyone and just hanging by the campfire.  And we learned just how far Gavin and I are willing to go to give our children these amazing experiences.  Let's just say, we had a dedicated poop tent for Zoe's enemas and toilet and leave it at that!

I truly believe that Zoe getting all that fresh air and having such a fun time the week before surgery really helped prepare her body for the procedure.  I'm sure the week of antibiotics and extra enemas helped too, but seriously I do think Zoe being reminded of how good life is helps her gather her strength to fight when the time comes. 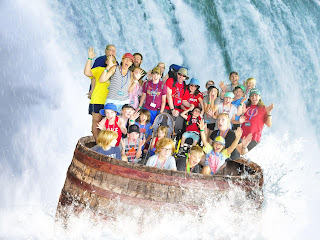 If you can't see us- the Canadians are all wearing red...so is Paul, but that's because he is a wannabe Canadian...or maybe he just likes the colour red...
Posted by Genevieve Ross at 6:10 PM 1 comment: