I always struggle with titles for these dramatic postings.  Zoe is better than a few days ago, so she is definitely better.  But we always hold our breath a little at this stage.  As the doctor said to me on Friday- "Zoe's progress is promising but her lungs are not quite out of the woods yet."

Zoe was able to move back to a regular floor which is great, awesome, amazing, comforting.  She continues to spike fevers and is anaemic but this is not surprising given the virus underlying all of this and the treatments she had.  So she will be in hospital a few days yet.  Also not surprising.

What else to say at 5am when I should be sleeping?

Ailsa has come down with Zoe's cold and I suspect she may be brewing an ear infection.  Despite that, she is in a good mood most of the time.  And we are sleeping over at Angela's house.  It was great to see the girls playing together yesterday.  Ailsa and I stopped at Grandad's on the way home from ballet Friday evening.  So Ailsa has had a lot of time to just be a kid this weekend which is exactly what she needs.  Ailsa talks about Zoe fairly constantly and says, "I still feel really sad that Zoe is in the hospital."  Yep, me too kiddo.
Posted by Genevieve Ross at 5:24 AM No comments:

Two Steps Forward, One Back

Zoe was doing really well Wednesday evening but by Thursday morning, her chest X-ray showed more fluid in her chest.  She is third spacing.  Which is not really a very nice thing.  To put it simply.  If you want to freak out and worry even more about Zoe, you can google it!  Needless to say- having the fluids in your body go into your lungs and other organs rather than through the normal system is not a good thing for your body.

However, they do seem to have this under control.  A "good" thing is that Zoe has done this before and they keep good records.  So they know what works for her.  Right now they are giving her meds to flush the fluids out of her body.  It is a balancing act though- if she pees out too many of her fluids her body gets dehydrated and her heart rate and blood pressure go low.  So being in the critical care unit is a good thing right now.  They can keep a close eye on her.

I am probably giving more medical info than most people care for.  But I did want to give an update and my brain is very tired.  So there it is.

Thank you everyone for keeping us in your thoughts and your kind words.  Despite all of this, Zoe has continued to have periods where she is happy, laughing and smiling.  When I read the comments and emails to Zoe, she was full of smiles.

I worked yesterday but it was very challenging since I just wanted to be with Zoe.  I was also completely mentally and physically drained.  So I am not going to work today.  I am going to spend time with Zoe and then go home to take Ailsa to ballet.  Gavin has been home the past two nights so he will take over here.

Ailsa is supposed to have her first sleepover this Saturday!  She loves my friend, Angela's daughter.  Zoe was supposed to go to a respite house this Saturday so we set it up for Ailsa to also have a special sleep over.  As long as Zoe continues to progress well, Ailsa and I will still do the sleepover.  I think it will be a good distraction for her.

Plan this morning is to continue weaning Zoe off the c-pap machine and hopefully switch back to just oxygen.  She was on oxygen only by Wednesday night but it was too soon and her lungs got worse.  So they are taking it slower this time.  Hopefully her body is ready to breathe on its own.

Zoe is sleeping so I am going to do the same.

As always, thank you everyone- for listening, for reading, for bringing me meals, for dropping off groceries, for sitting with Zoe.  You are all amazing!
Posted by Genevieve Ross at 2:58 AM No comments:

Zoe in the ICU

Zoe has been in hospital with pneumonia and took a turn for the worse yesterday.  She is now in the ICU on a breathing machine.  They gave her meds to take some of the fluids out of her lungs and that seems to have helped.  Zoe has a bladder infection on top of the pneumonia.  They are not sure if all this extra fluid in the lungs is just pneumonia getting worse or her third spacing into her chest like she has in the past.  Either way, the treatment is the same.

Zoe was actually in a great mood despite not being able to breathe.  She was laughing and rolling around so much that she kept knocking the oxygen mask off and her heart rate kept going high.  They had given her some steroids to help her breathe with the hope that a breathing treatment and the oxygen mask would be enough.  It was not enough and Zoe ended up going to the ICU anyway, but the steroids certainly gave Zoe lots of energy!  The staff all commented that they had never seen a kid so happy to go to the ICU.  Zoe had a male respiratory therapist and a male doctor, so she was laughing and smiling the whole way to the ICU.

The staff in ICU were not sure if Zoe was so active because she was having trouble breathing but we explained that this is just how Zoe is.  When Zoe has been critically ill before, she has not been like this.  She was very sedate.  So the critical care staff had not seen Zoe like this.

We took this to be a good sign.  Once Zoe was asleep and breathing well on the machine, Gavin and I went to get a little sleep.  And we did.  Which will help immensely with the rest of today.

Ailsa is very concerned about Zoe.  Before today the girls had been face timing every day.  Ailsa has been going to daycare and Gavin or I have been picking her up to give her a bit of routine.  She is excited that it is "Yoga Wednesday" at daycare today.

Ailsa is such a empathetic sister.  Here is a conversation I had with her the other night:

Ailsa: "I feel sad because I am worried about Zoe."

Me: "I feel really sad about Zoe being sick too."

Ailsa: "Do you remember when I had all those fevers and I had to get all those tests?"

Me: "Zoe doesn't need a lot of tests right now.  She just needs to get lots of rest and she needs a little help breathing."

It is hard to believe that our children are old enough that we are getting into the whole sports/ activities arena.  Zoe will continue therapeutic horse back riding again this year.  We are extremely grateful and lucky to receive a grant from the Jennifer Ashley Foundation that will cover the cost of two therapy blocks (the year consists of three blocks).  We have seen a change in Zoe's muscle tone and even her ability to focus while sitting.  We went to the zoo on Sunday (we are loving that membership!) and Zoe did an amazing job sitting up on the carousel.  Gavin gave her guidance support on her legs but Zoe was able to hold her trunk up and steady while holding on to the handle!  The girls chose a double crocodile to sit on so Ailsa was right behind Zoe.

So What About Ailsa?

We are always conscious of making sure Ailsa gets plenty of our attention and resources.  We asked Ailsa if she would like to be involved in something this year.  We did swimming classes in the past.  Ailsa asked about joining an ice hockey team.  This girl is obsessed with hockey!  When we talk about going to Kindergarten next year, Ailsa asked, "Do they have a good hockey team?"  She was disappointed to know that 3 year olds do not play on teams.  So she decided to do ballet instead.  She determined (yes, this was her idea) that she would do ballet to help her get ready for hockey and that she would learn to ice skate this winter.  So far Ailsa LOVES ballet.  Every morning she asks, "Is this a ballet day?"  The only other day that competes for her attention is yoga day at school.  If we say, "No, it is not a ballet day."  She immediately says, "Well, is it a yoga day then?" 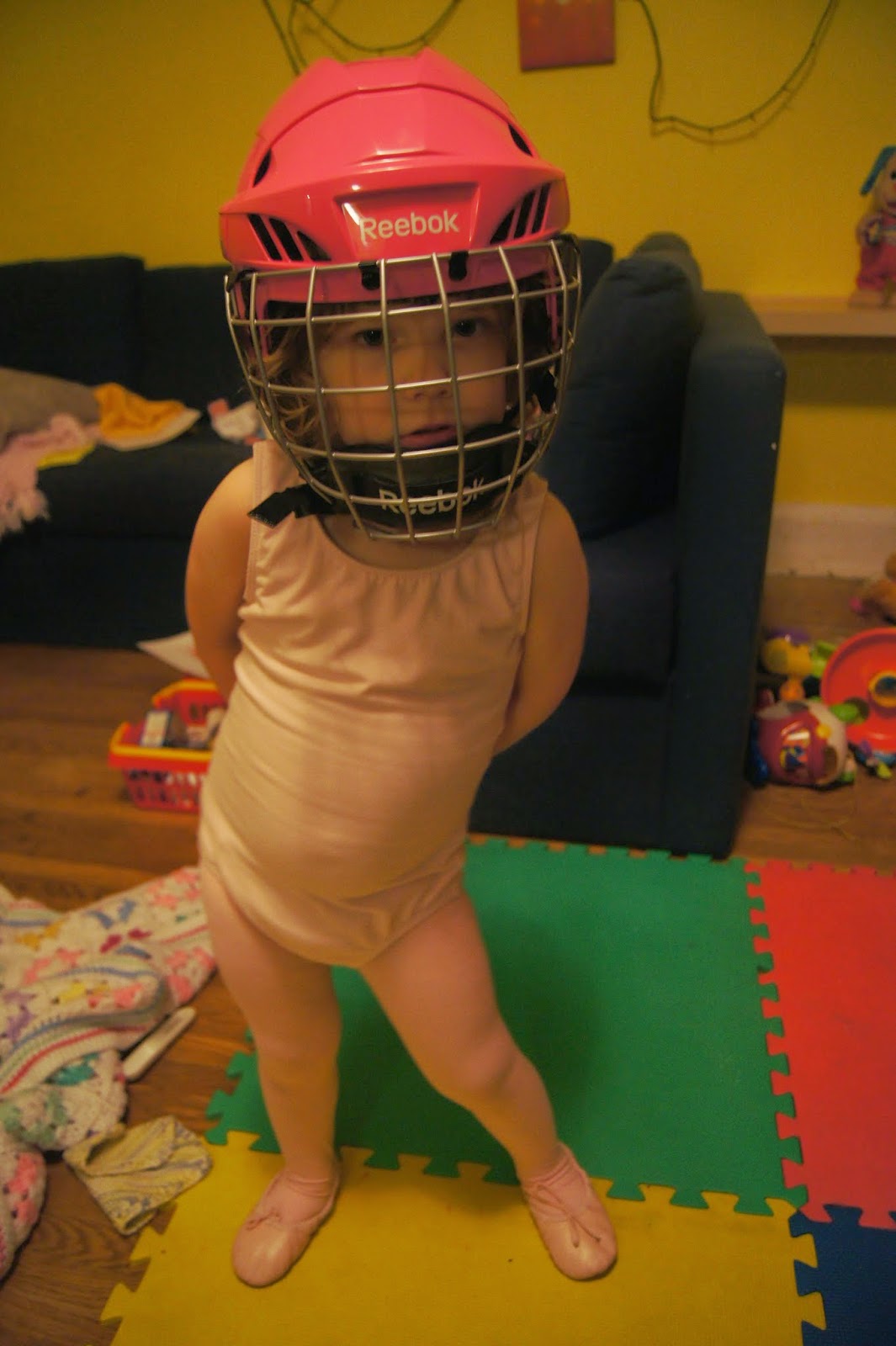 Ailsa was practicing ballet last night.  Apparently an important part of practice is wiggling her hips.  We got her a helmet because you have to wear a full helmet if you ice skate on any city owned ice.  We got her some skates from a thrift shop so she is ready to go!  You can guess who picked the colour for the helmet!
Posted by Genevieve Ross at 7:26 AM No comments: