Just another day in caring for Zoe.

She only had one small pee today. Which means force feeding her. Which I hate. And Zoe has always hated but can now sign "angry" to make sure I know she hates it.

And just another bath.

Where Zoe tips her face back into the water in an attempt to drown herself. She sucks the water into her lungs. I sit her up while she chokes. But after a few seconds she takes a breath.

How many more times do I have to bend over and give her body total support just to get her clean?

How many more times is she going to choke herself?

And I already know the answer to that- too many to count.....as many as it takes....and it doesn't really matter how many since I will always be here with her.

As I scrub her scalp medicated shampoo into her head Zoe accidentally knocks her turtle toy so the neck makes the cracking sound she loves. I see a tiny smile start and a small chuckle, "Heh heh heh."

And I think two thoughts simultaneously:

"This kid is going to kill me."

"My god she is gorgeous."

I ask Zoe, "Are you breaking necks?" (This is a game we play with her cracking turtle). Zoe throws her head back in a full grin and looks at me expectantly.

Fun with the swine flu

So Zoe was hospitalized for the H1N1 virus this last week. She was in for 8 days and is now at home on NG feeds. She had been slightly sick a couple of weeks earlier but as Genevieve was a bit sick then and Gavin had a really bad headache/fever for a couple of days we thought she had managed to avoid it too badly. We were hopeful this was our brush with the swine flu. Then Genevieve got sick again for five days or so (and Genevieve doesn't usually get sick). Zoe was still well however. As she is in the "high risk" catagory she got the H1N1 vaccine on Friday the 30th of October, about 2 days after it became available up here. She had a bit of a temp over the weekend but was in good spirits and eating well - we just thought it was a reaction to the vaccine (and actually, it could have been just that). On Monday we sent her off to school and she had a good day. Monday evening though she started fussing and spiking fevers up to 39.5 degrees centrigrade (103 farinheit). We went to the Emergency department at Sick Kids (where Gavin works) and her temp was taken at 37.5 centrigrade (37 is "normal- Zoe usually runs half a degree below that)- we think this temp was incorrect as they did it in her armpit instead of her butt (which Zoe actually likes- strange girl) and she was squiggling a lot. Never- the-less we jumped the cue due to Zoe's complicated medical situation. and got into a room in the ED. Good thing we did because a half hour later she had a febrile seizure and temp was up to 40.5 (105 farniheit). The seizure lasted a couple of minutes. They gave her rectal Ativan which she promptly pooped out. Her airway stayed open but they couldn't get IV access after six tries so that was a bit tricky. They eventually got a line in on the seventh try later on. We were not happy about the seizure- Zoe (unlike a lot of the 1p36 kids) has never had seizures before and we weren't anxious to start. But hopefully this was just a febrile seizure and not part of an underlying epileptic condition. She only had the one, so that is good news.
She did well in hospital, just made slow progress. Typically the fever with H1N1 lasts about four days- she is now on day 10. She isn't eating or drinking much, hence the NG (which she has already pulled out once). But she is eating more each day. Not drinking a thing, but that is how Zoe is when she is sick. We are comfortable managing the NG at home; we ended up doing it frequently last winter to keep Zoe out of hospital. Hopefully we will be able to remove it in the next few days. She was on a small amount of oxygen while in the hospital for a few days but only by mask, nasal prongs (useless- they always end up in her mouth or her eyes) or blow by.
It was tough being in hospital again. Zoe's grandfather Alan is here right now- he came in from Calgary to help us around the house but ended up doing our laundry and bringing in fresh laundry, food and clean cloth diapers in for us. It was a big help, as both of us stayed at the hosptial with Zoe to do her care, run her feeds, take her temps etc. When Zoe is in we like to do most of her care anyway. Genevieve took Tuesday and Wednesday off but went back to work Thursday and Friday. As she works on the 5th floor of Sick Kids and we were on the 7th it made her commute a lot shorter (unless she got stuck on the stairs behind some big fatty around the sixth floor). Gavin ended up working two twleve hour shifts in the Emergency room on Saturday and Sunday, mainly because two of our other staff were out with H1N1 themselves and the sole remaining person had worked 5 days straight. So we are all pretty much exausted- Zoe from being sick, Gavin and Genevieve from looking after Zoe, sleeping at the hospital and working too much (on Sunday evening I remarked to a colleague that I hadn't been outside the hospital for 48 hours- shortly after Genevieve found me and made me take a walk with her!) and my dad from running around and doing all our scut work. But we are home. Zoe was one excited little girl when she saw she was going to get to sleep in her own bed yesterday after coming home! 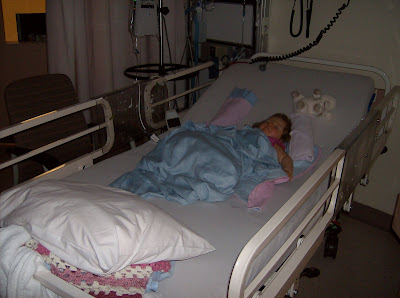 Zoe sleeping in her big girl hospital bed. This was the first time she has ever slept for any length of time in a large bed. It was useful though, because for the first couple of nights she was so restless mom or dad would have to climb up there and sleep with her. Not very restful for us (Zoe is not a peaceful sleeper) but what she needed! 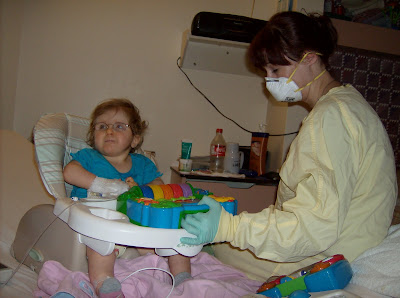 Zoe and her wonderful respite worker Riann, who came in on her own time to give mom and dad a quick break one day.