On Sunday we finally had Zoe's 7th birthday party.  Zoe's birthday was in February and we planned the party two other times but both times Zoe ended up in hospital.  So this was party take three for Zoe and a joint party for Ailsa whose birthday is in May.  Zoe is such an easy going child that she was fine with sharing her party with Ailsa.  Ailsa was very excited to have a joint party with Zoe.  We are so lucky to have so many caring people in our lives who are there to celebrate and understand when the celebration has to be delayed!

We were extremely touched that Erin, Jaxsen, Gill and Skip (Shelby's family) came to the party.  There were a few tears all around, but I think it was really good for all of us to be able to celebrate Zoe's birthday while remembering Shelby.  I really admire Erin for staying involved with the 1p36 group.  I can not honestly say if I would be so strong if I lost Zoe. 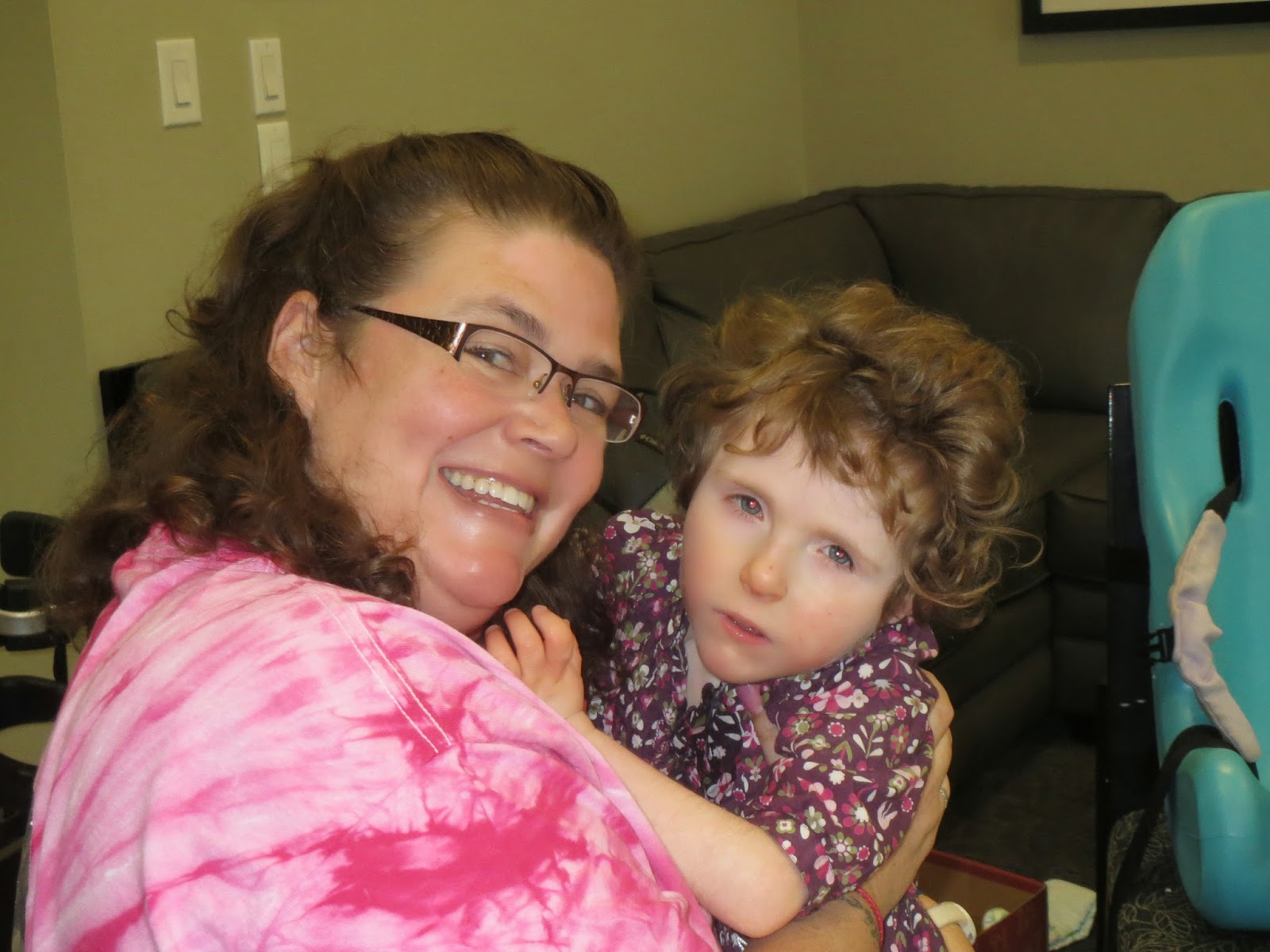 Erin and Zoe having a snuggle.

Gill and Skip (Shelby's grandparents) gave Zoe a very special gift- Shelby died on Christmas Eve and therefore she was never able to open her presents that Christmas.  Gill and Skip had made a build-a-bear for Shelby.  The bear is all dressed for Christmas, plays "Rudolph the Red Nosed Reindeer" and even has a wig with pigtails perfect for pulling on!  The Bear's name is "Believe."  We have many things that remind us of Shelby- lots of her equipment and clothing that Zoe uses.  But this is a very special gift that Zoe will always have to remember her friend Shelby.  I am very touched by the gesture and I admire Gill and Skip's strength in letting go and moving on.

Zoe with Shelby's bear.  The ever present Lyn in the background.  The girls came up with the invite list and Lyn was the first one on the list.  Which was good since we had the party at Lyn's!

I did not expect the girls to get many gifts- I always tell people to not feel that they need to bring anything.  I did ask for clothing this year since the girls are out of clothes the next size (I did not know that Erin was bringing me two huge bags full of clothes!).  The girls did get clothes and they also got completely spoiled!  Thank you everyone for the wonderful books, toys, bubbles, etc.  As I said, we are so lucky to have you all as part of our lives. 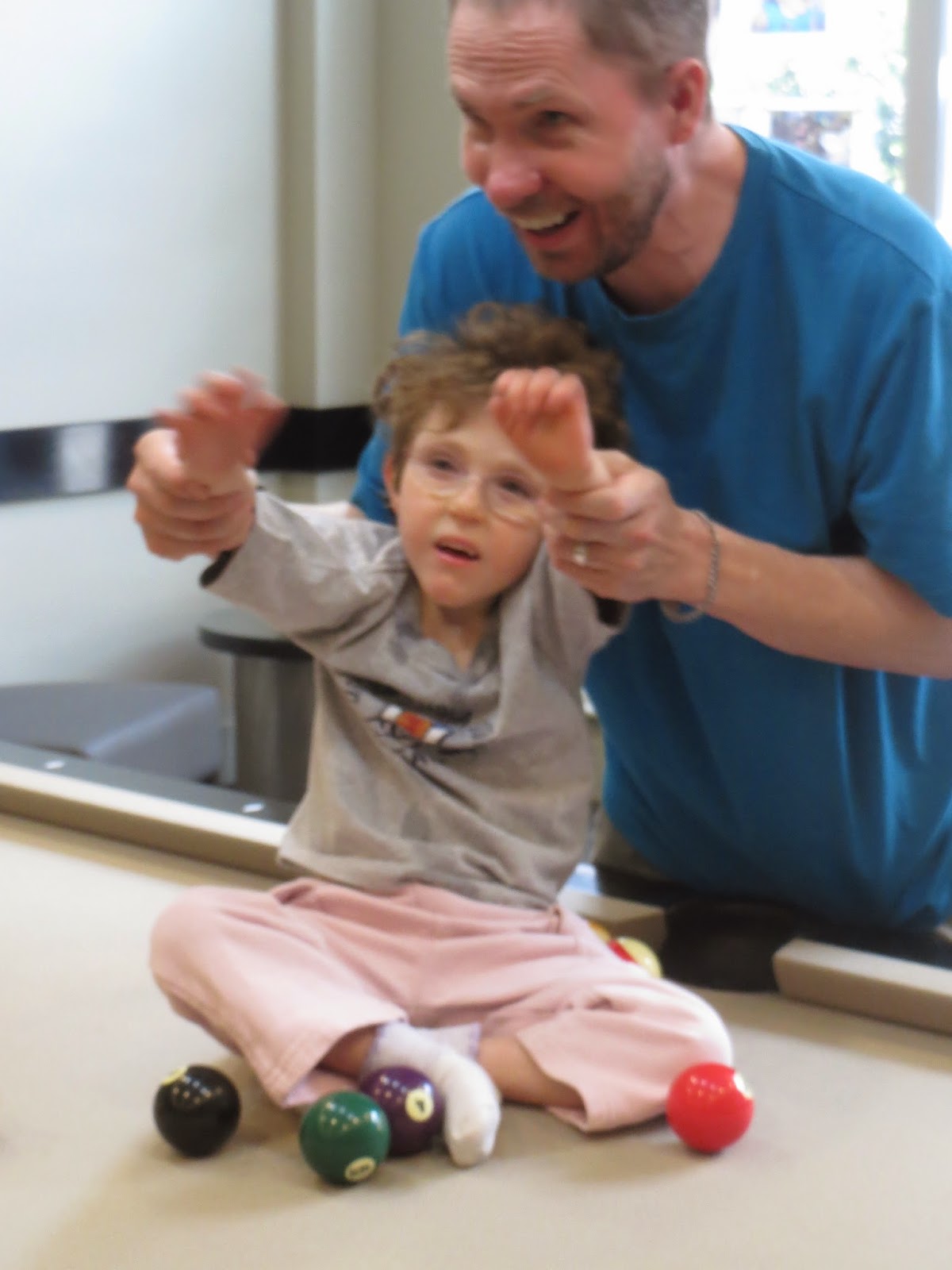 We had the party in Lyn's party room (per Zoe's request).  The pool table in the room was a big hit. 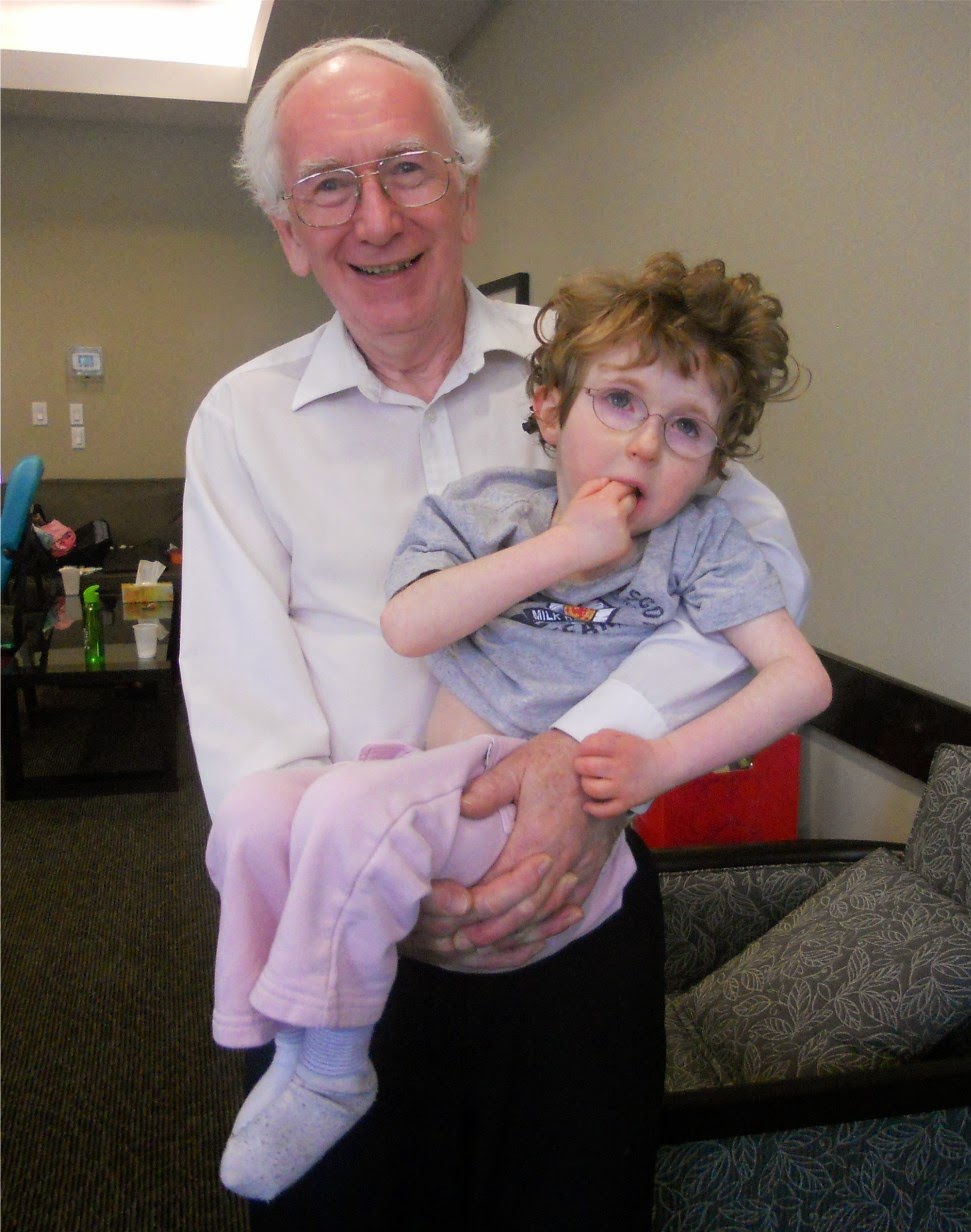 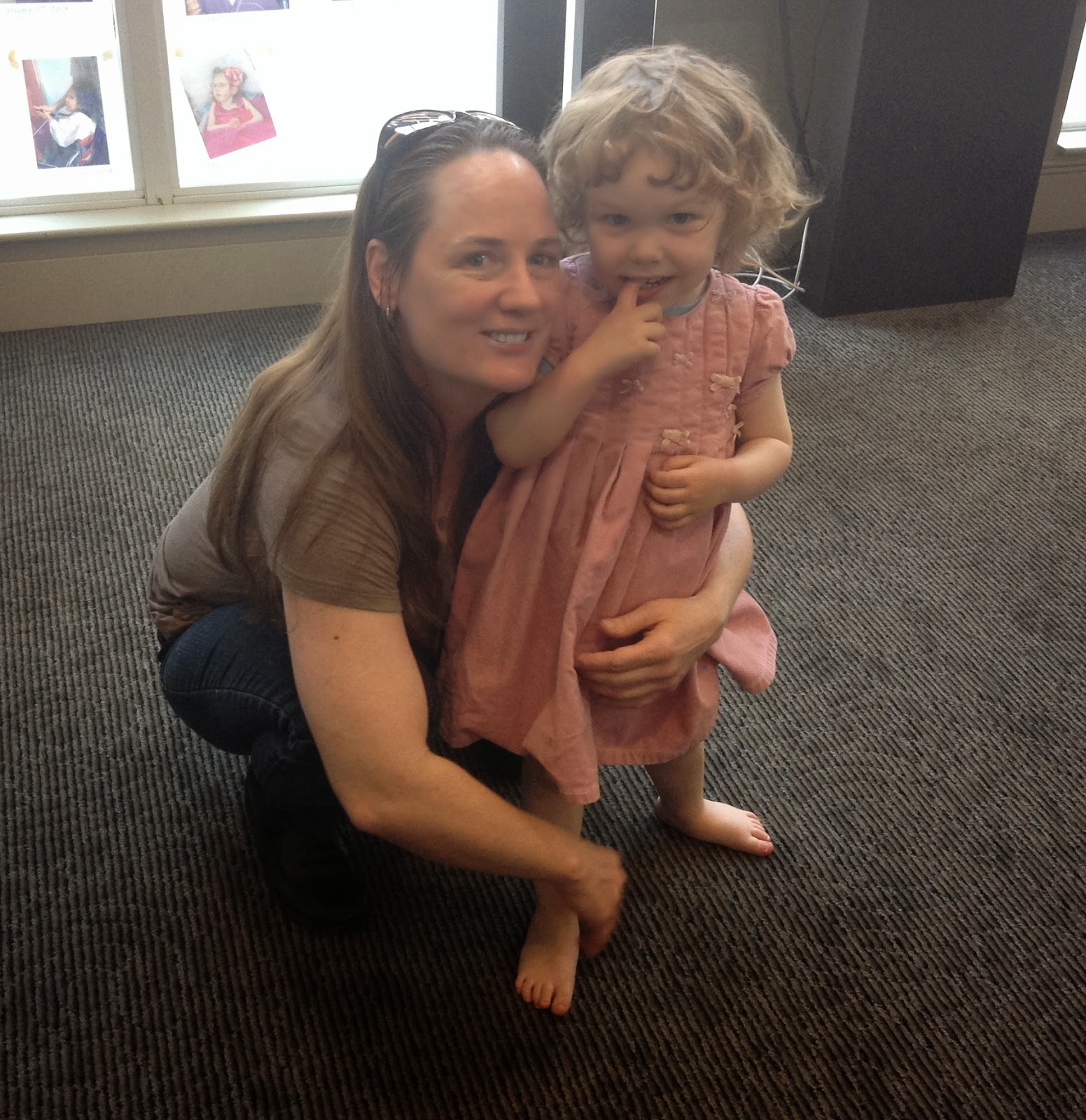 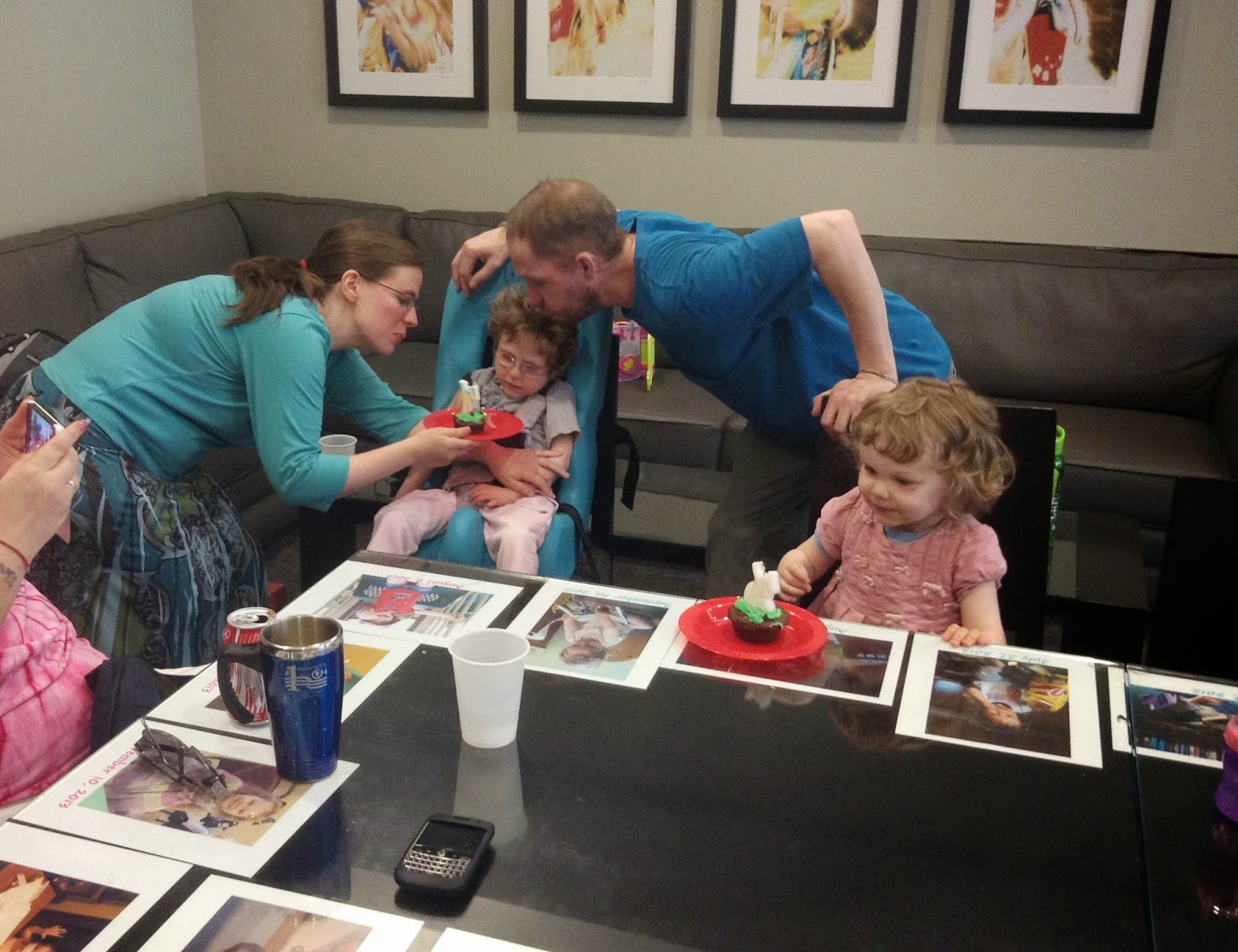 Blowing out the candles.

Thank you Grandma Jean for the photos!  We missed you Grandpa Ken!

In March we were given an amazing gift by the Children's Wish Foundation.  After much discussion with Zoe we were able to plan a trip that met all of her desires and needs.  We flew to Florida and boarded a cruise ship named the "Oasis of the Seas."  The trip was even more amazing than we had hoped.  Everyone was healthy the entire trip and we all had a wonderful time.  This was the first vacation that everyone stayed healthy and we were able to do everything we planned.  It was the first time in a very long time that the girls just got to be children.  They were able to forget about hospital visits and being ill.  They rode the merry-go-round (many, many, many times!), played at the water park and ran around as if they had no concerns in the world- just like every child should be able to do.

Zoe's criteria:
-Does not want to miss any school- we went during March break.
-Wanted to go somewhere warm- went to the Caribbean.
-Wanted to go swimming- cruise ship had water park and hot tub pools.
-Wanted Ailsa to come along- obviously Ailsa came along.  Apparently Zoe felt mom and dad were optional...
-Wanted somewhere she could walk a lot- picked a cruise ship because it is more accessible than a resort or staying at a hotel.  Zoe could walk everywhere- the ship had a boardwalk, a central park with walking path, an indoor walking/ mall area, and everything was accessible.
-Wanted to ride a merry-go-round- picked a ship with a merry-go-round. Ailsa and Zoe on St Thomas island in front of our cruise ship.  It was huge!  We got off the ship and walked around the port area.  Zoe loved the big areas to run around and Ailsa enjoyed shopping.  Ailsa even convinced Grandad to buy her a new hat that she loves and still wears. 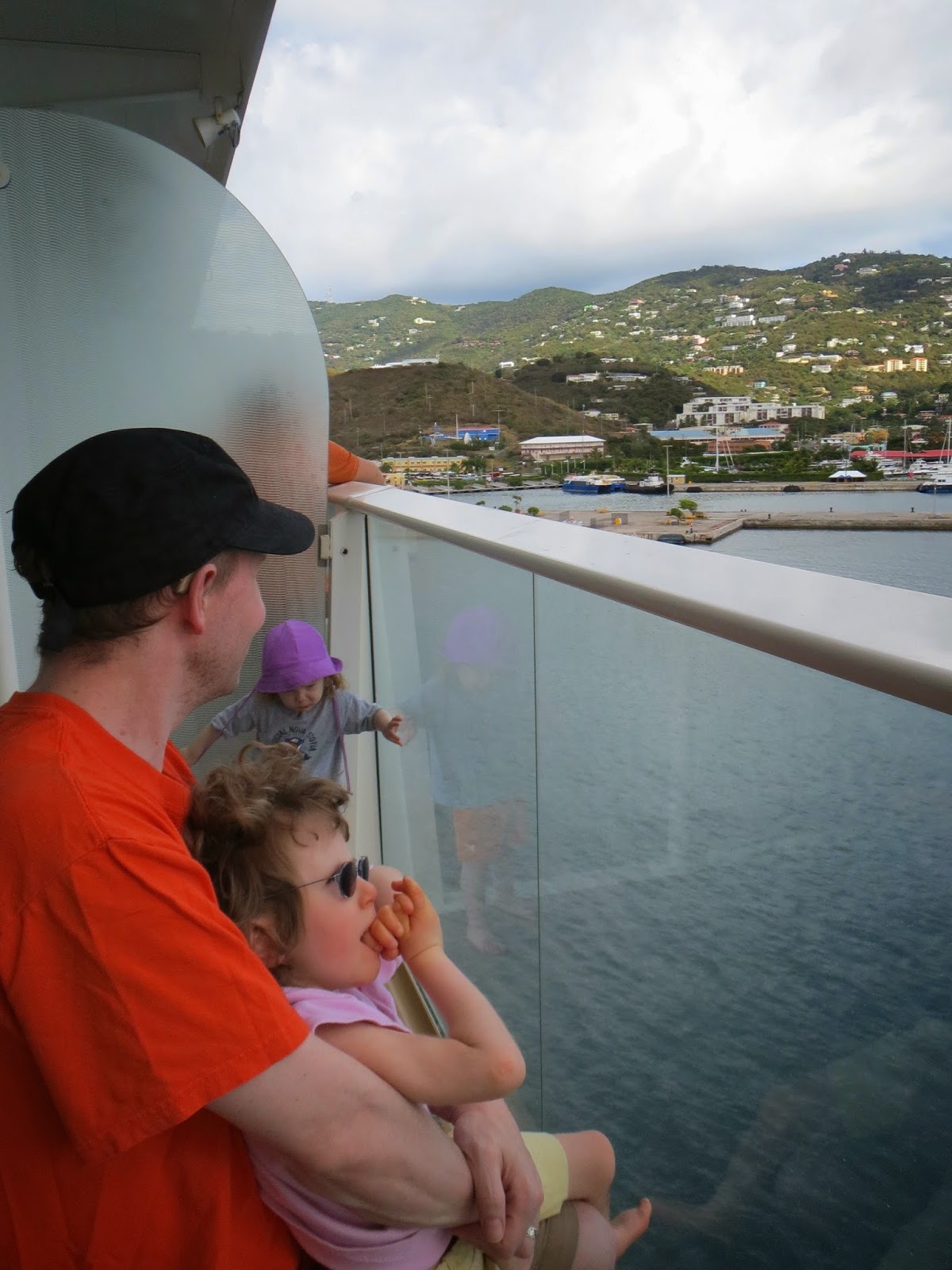 This was the view from our balcony- not too bad!  Alan/ Grandad had a room next to ours and there was a door on the inside that opened between the two rooms.  The balconies also joined up so we could use both rooms.  The extra space was extremely helpful since we had Zoe's walker, the stroller and Zoe's feeding chair with us...not to mention all the clothes, diapers, extra food, etc! 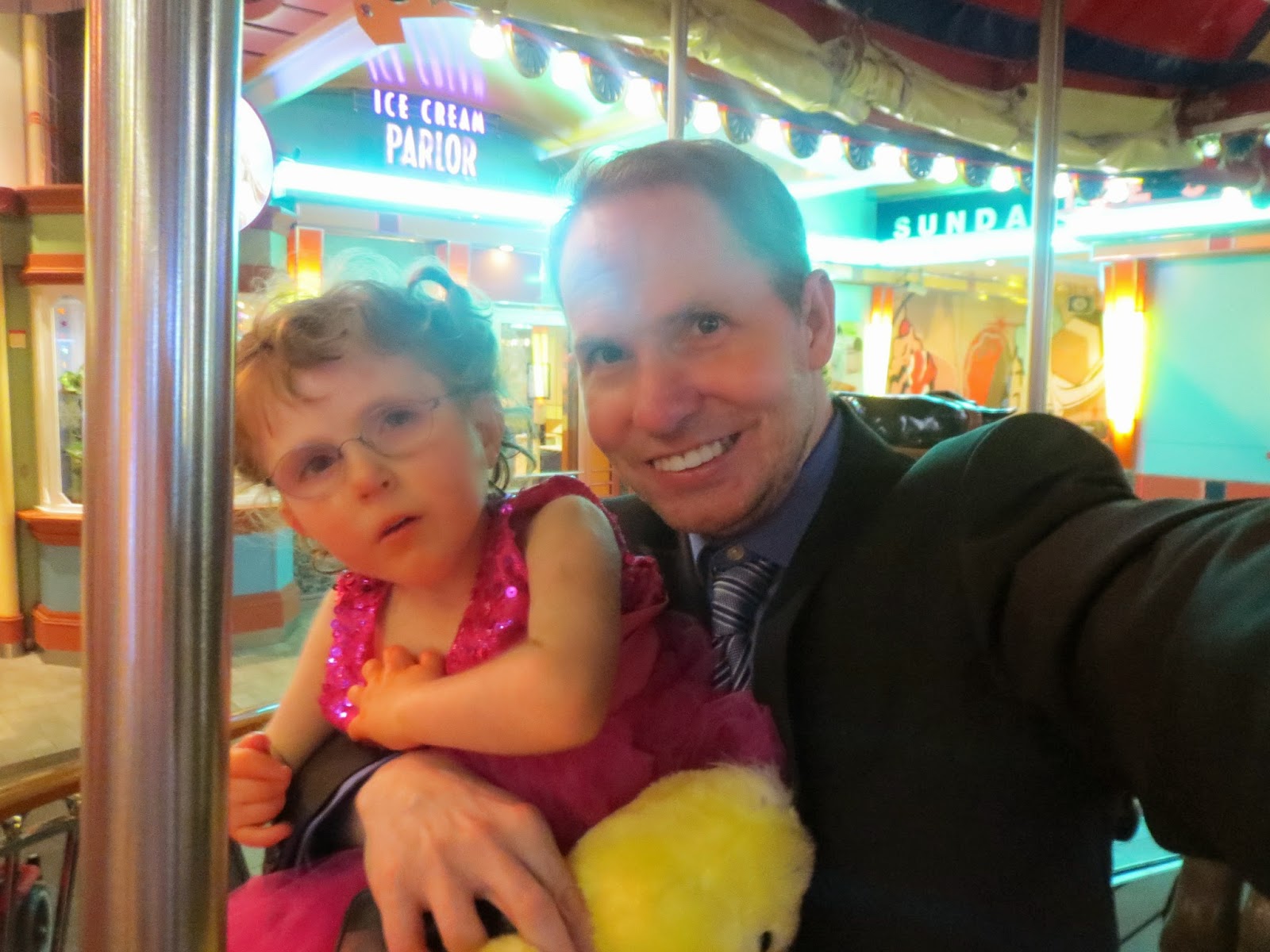 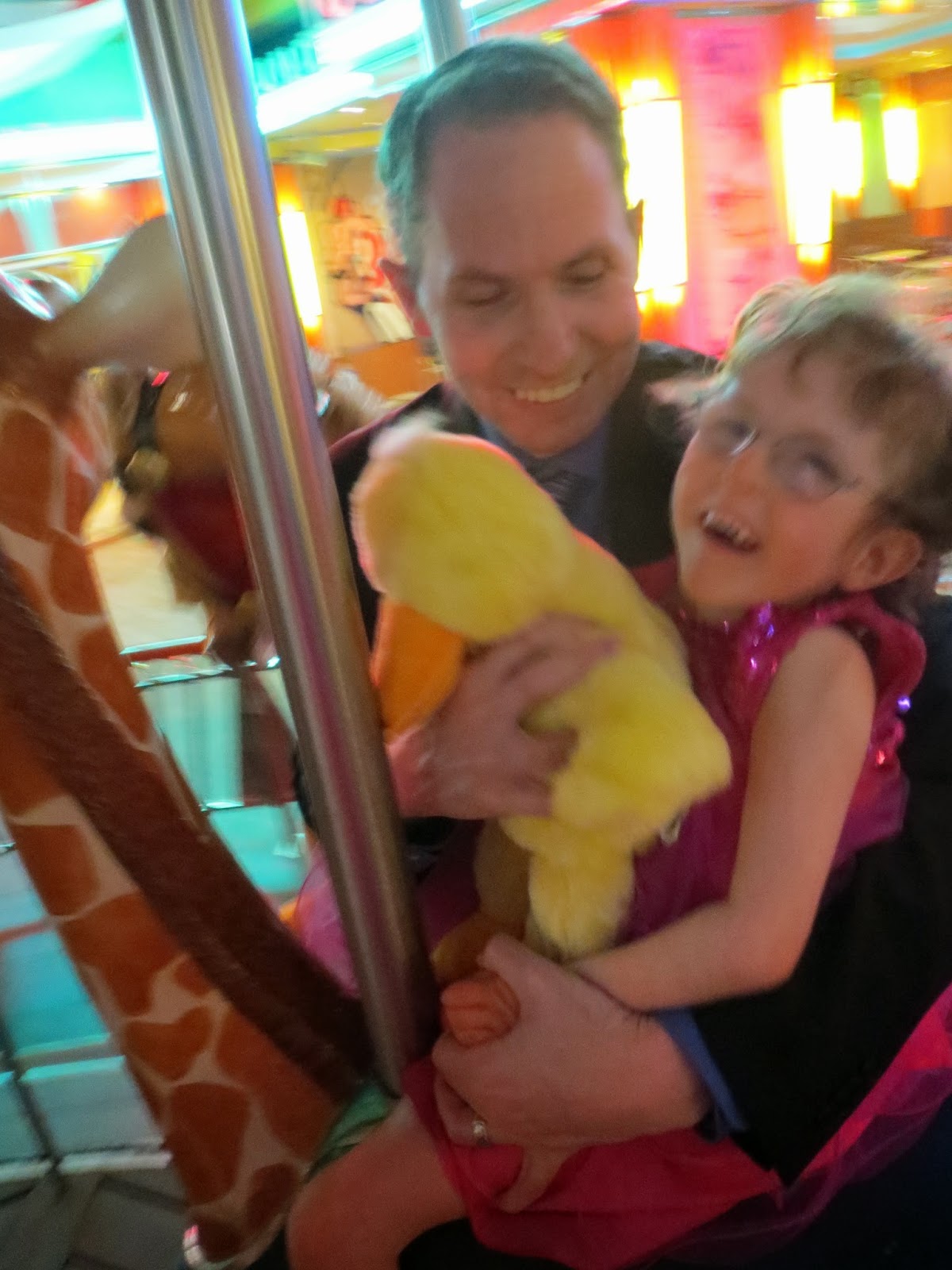 The Merry-Go-Round is where we spent most of our time.  It was inside a board walk area that both girls loved to run around in.  This was not a ship just for children so the merry-go-round was never crowded.  The attendants let us just ride around and around without lining up again.  Most staff got to recognise our family.  Zoe is holding a duck in these pictures that she picked out and made at a build a bear type shop, I think it was called "Pets At Sea."  Ailsa also picked the duck (she wants to do everything her big sister does) but she picked the duck sound to put inside her pet, Zoe had picked an elephant sound.  Funny girl. 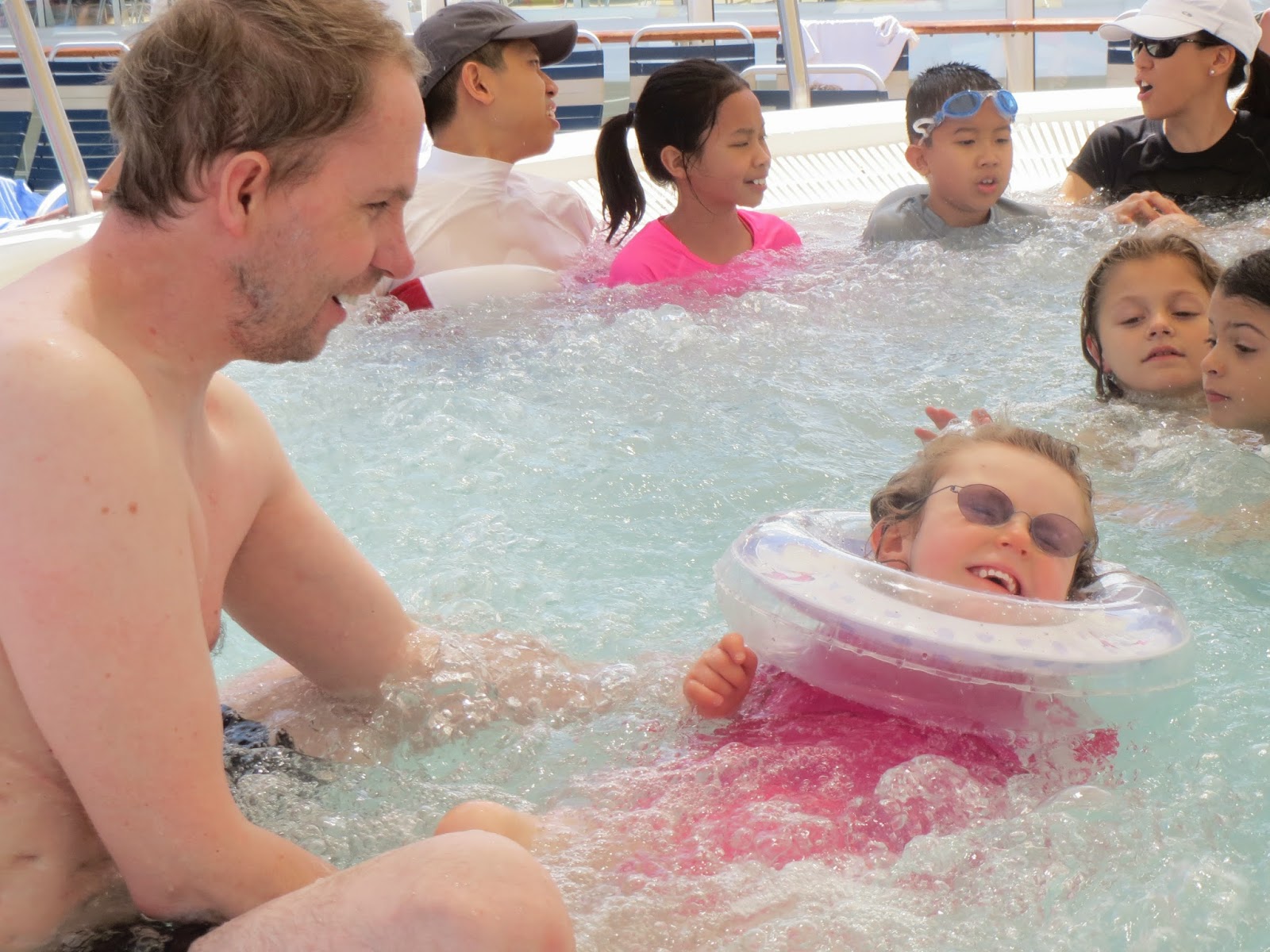 Zoe loved the hot tub in the children's area.  The other kiddy pools were a little chilly most of the time so we mostly hung out in the hot tub.  This neck float is amazing.  Zoe is able to swim completely on her own...for some reason she kept swimming away from us.  Geez, you would think she wanted to be fully independent or something! 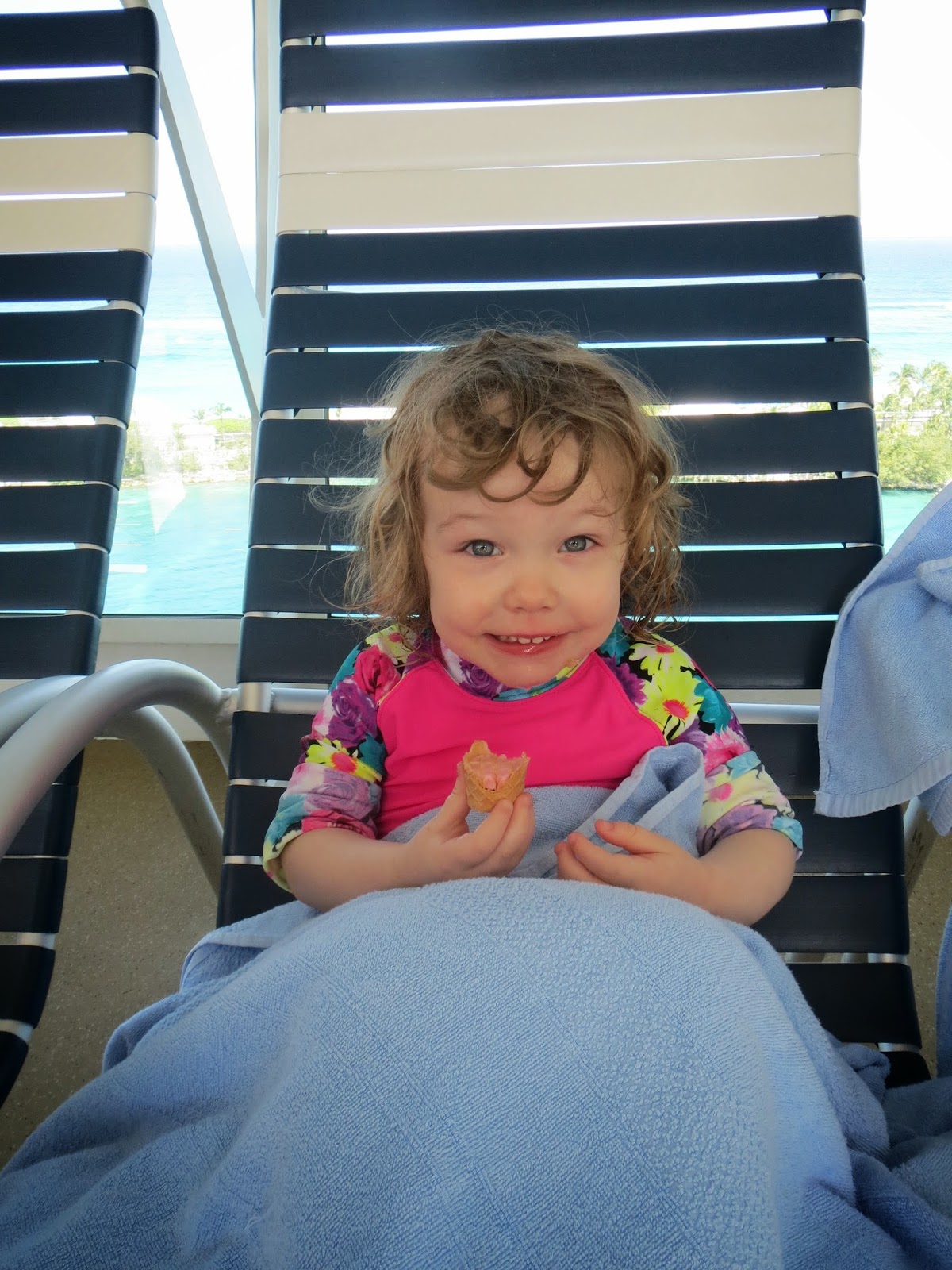 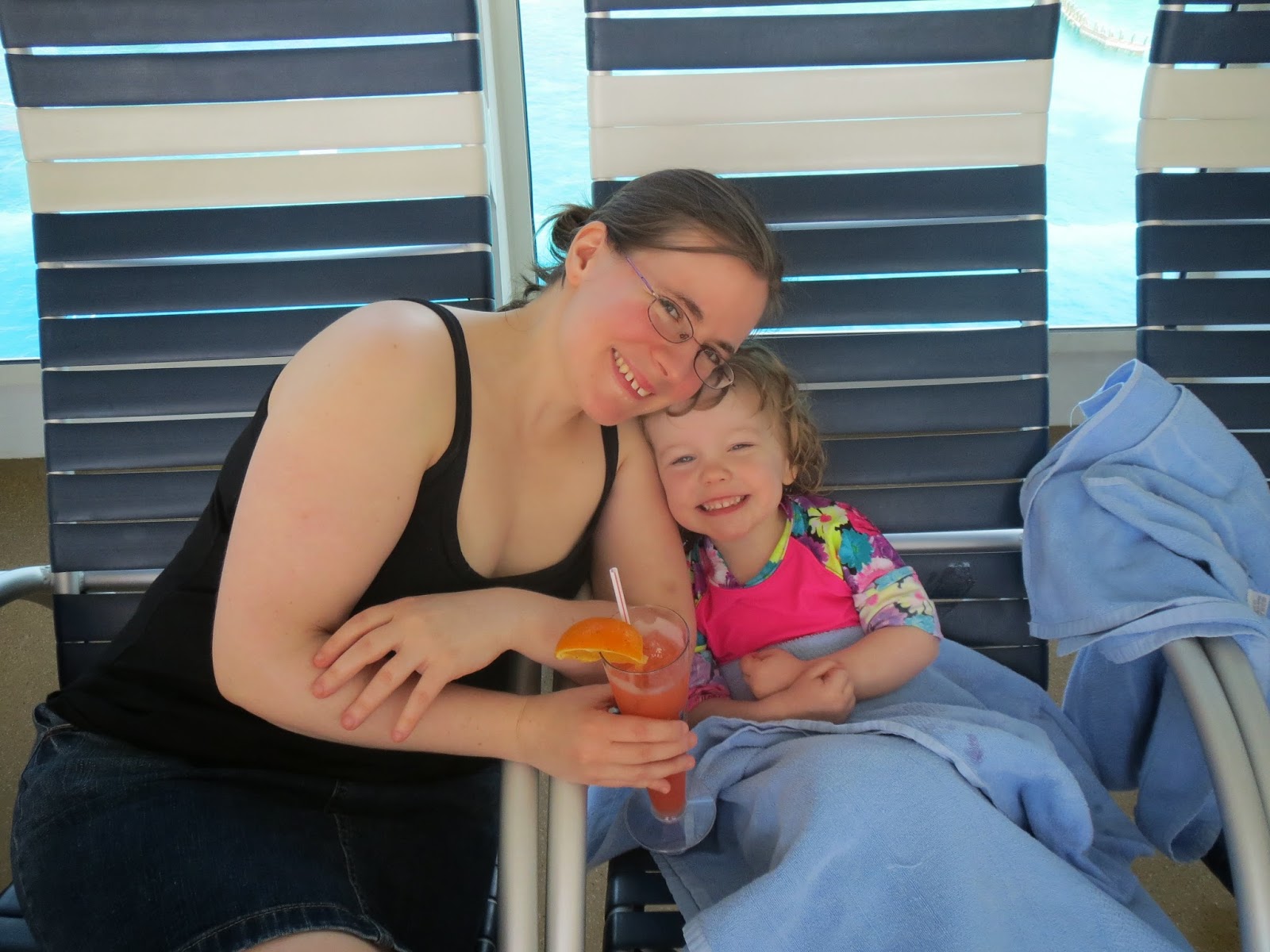 I love that care free smile on Ailsa's face....and my face too :) 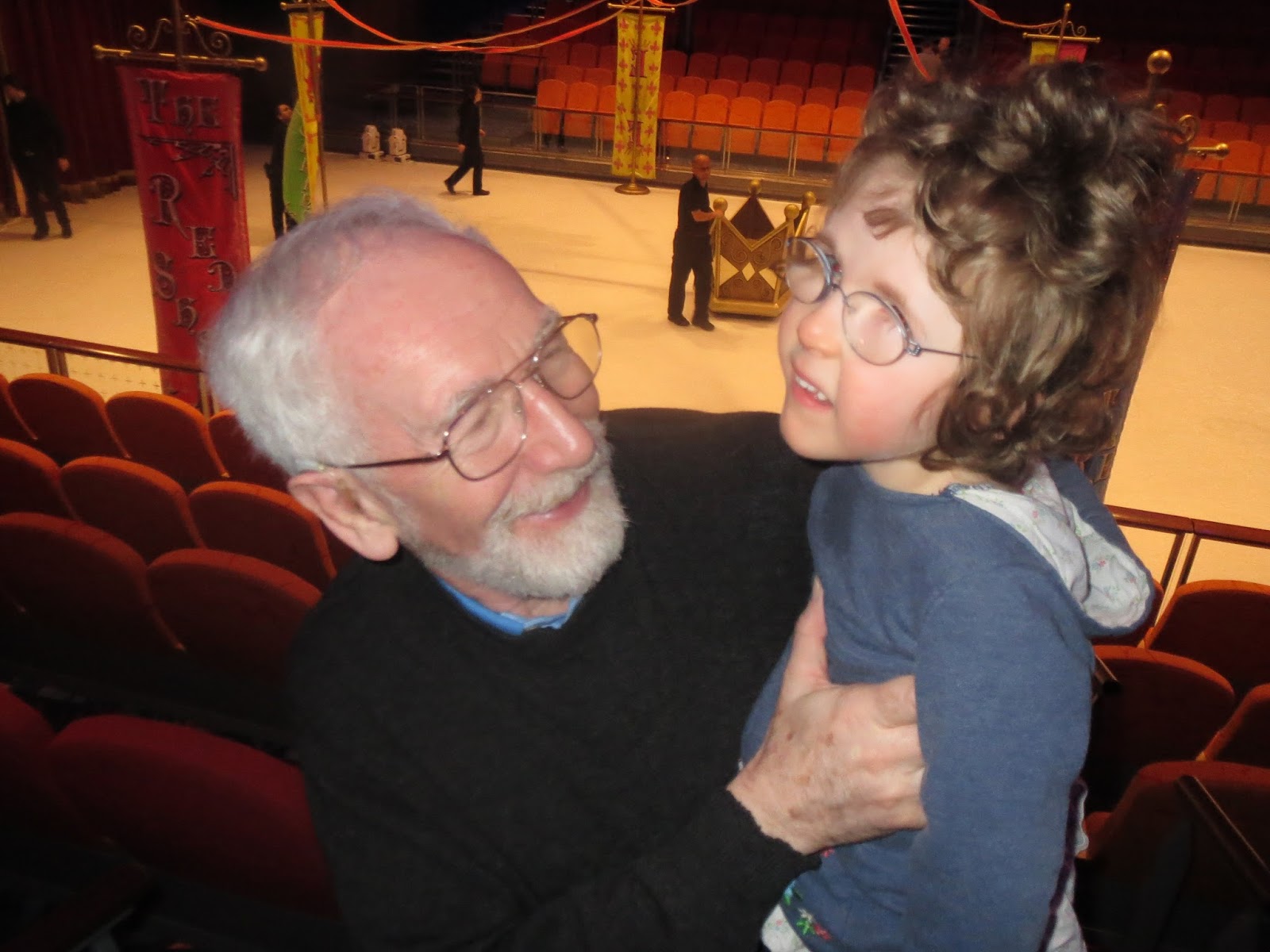 This was Alan holding Zoe after the ice show.  Yes, you read correctly- the ship had an ice rink on it. We went to the ice show but did not manage to find time to ice skate.  We were impressed with the quality of all of the performers.  This was a small ice rink but the skaters managed to get enough speed to do triple axles/ spins/ whatever the fancy words are for those amazing things that skaters do. We went to other shows and everything was high quality.  Most of the shows were 50 mins so perfect for the children- not too long.  There was an outdoor aqua-acrobat show that was amazing.  People at the show would laugh at Zoe laughing, smiling and throwing herself around with excitement. 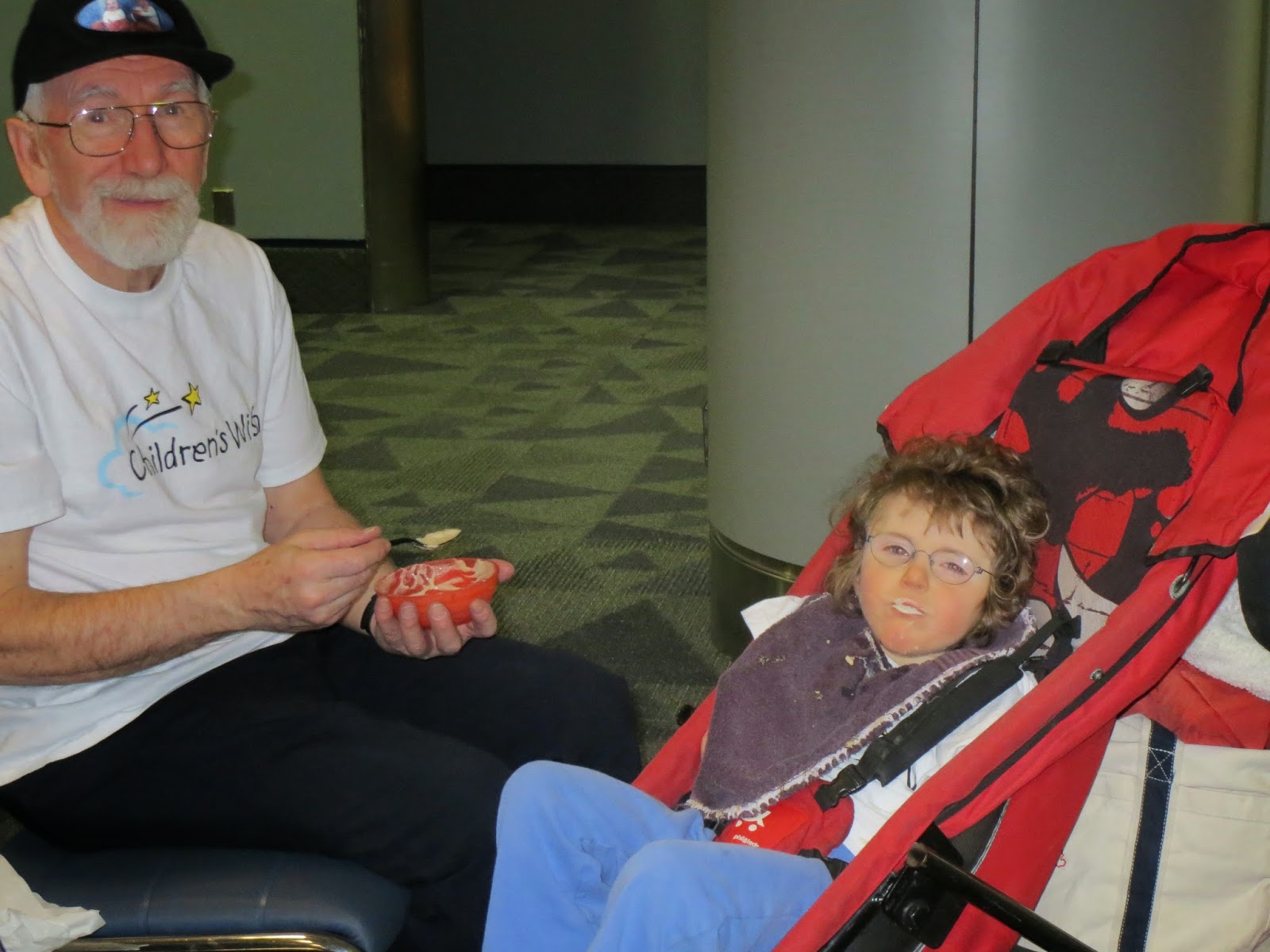 Children's Wish paid for us to take along a medical attendant for Zoe due to her needs as well as the fact that Gavin and I have our own health issues.  It was amazing (I know I keep using the word amazing but I can't help it) to have the extra pair of hands.  Here is Grandad, hard at work already on Day 1 at the airport.  I love this picture because they look so much like each other and both seem to be saying, "Another picture?  Come on, I'm eating and it is only 6am!"  If Alan had not been there it would have been a great vacation for the children but not so much for us.  Gavin still needs a lot of rest and during past holidays he had to sleep for long periods of time which left me to do everything else.  It was so great having the support so we could all have a great holiday.  I loved having the time to play with Zoe and Ailsa, to just be a mom.  It was also our way of saying thank you to Alan for all of the support he has given us these past couple of years.  He has really stepped up and is willing to help out any way he can.  We try not to ask too much of him but given our life, sometimes getting rest is not an option for any of us.  Alan has really become part of Zoe and Ailsa's every day lives so it was great that he got to see the girls having so much fun.

Thank You Children's Wish!!!!!
Posted by Genevieve Ross at 1:31 PM No comments: