Our Trip to Philadelphia

For Christmas, Zoe and I bought Gavin tickets to the Maple Leafs vs Flyers game in Philadelphia. Why Philadelphia? Two reasons- the first is that it is nearly impossible (and very expensive) to get hockey tickets in Toronto. The second reason is that my "little" brother and his wife live there along with several of our friends. Gavin and I met in Philly and lived there several years before moving to Canada. So off to Philly we went. We drove since we are not supposed to fly if Zoe is congested and when isn't Zoe congested in the winter? Zoe did great on the long car ride down (it took us 11 1/2 hours with stops) on Friday. Saturday, we met with Ruth and Ulla- two friends that I used to work with. 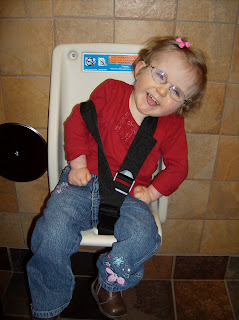 Zoe hanging out in the bathroom at the store where Ulla works. She thought this seat was hilarious. 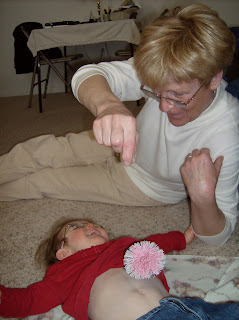 Zoe playing with "grandma" Ulla at Ulla's new apartment. Ulla is a wonderful volunteer I had the pleasure of working with in Philly. She is one of those people who you can never guess her age because she seems to have boundless energy and she is always so giving. She has been an avid follower of Zoe's blog and it was great seeing her again. It is amazing how much support we feel from someone we don't get to see as often as we would like. 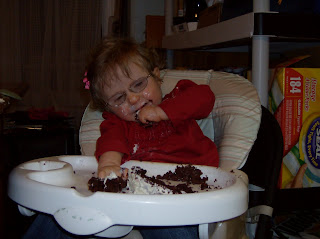 Saturday night we had another get together to celebrate Zoe's birthday. Kristen made a delicious cake- can you see Zoe is even bringing some of the cake to her mouth herself! Zoe was then thoroughly spoiled with more gifts after dinner. Her favourite is the Flyers jacket from Uncle Joe and Aunt Kristen! 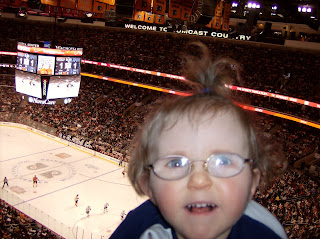 Zoe at the hockey game on Sunday! She spent half the time bundled and patted firmly to help her stay calm with all the noise. But some of the time she was full of energy and ready to play. 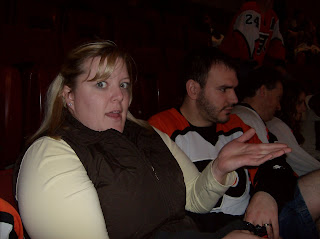 This is the only picture I have of Joe and Kristen from the whole weekend. How can that be? I guess we were too busy visiting and not always getting the camera out. I can only imagine Kristen is saying something about yellow helmet or free skate in this picture :) 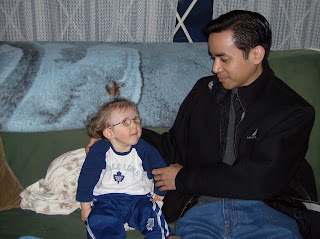 Patrick and Zoe discuss the game after. They look like they are having a serious discussion.
Unfortunately Zoe did not feel well for the rest of the trip. She has had a cold for the past several weeks and she started running high fevers on Sunday. So we cancelled our plans for meeting up with friends and doing shopping on Monday and just hung out at the house. We left early on Tuesday to split the drive into two days. We stayed at a motel Tuesday night and Zoe was miserable. Up every two hours with a high fever that required Motrin and Tylenol and cold baths to keep them at bay. We hurried back on Wednesday after Zoe had what we think was another short febrile seizure. Once we were home, she seemed better so we held off talking to the doctor until Thursday. The doctor wanted us to go there Friday for a chest xray. The xray, as always, was inconclusive. There is definitely some "findings" but it is hard to tell if it was just pneumonia or some chronic lung changes. Since this is the fourth or fifth (we've lost count) pneumonia this winter, Zoe's doctor is sending us to see the "chest team" at the hospital. We don't expect to get any answers but we are willing to go and see what they have to say. Perhaps we can come up with a plan for when Zoe runs these fevers. We are unsure if we should bring her to the doctor right away since we are usually told, lets hold off on antibiotics for a few days and see how she does. Which we are fine with- we don't want to give her meds if she doesn't need them. The tricky thing is that her pneumonia is not a typical pneumonia where it is bacterial and you treat it with drugs. It is often a viral cold that causes Zoe to produce more mucus which shows up as pneumonia in her lungs. So even when we give her antibiotics, they don't do anything since the underlying illness is viral.
The exciting part about the chest xray is that Zoe was able to do this one lying down instead of in that bicycle seat/plastic tube contraption she is usually in. We did this xray in the community office in the basement under the paediatrician's office. That way we didn't have to go to the hospital. We weren't sure if Zoe would stay still enough but she did a great job. She thought the xrays were hilarious- she was laughing the whole time. Which is much better than her crying and screaming which is what she usually did in the plastic tube. Who can blame her? It doesn't look comfortable.
Posted by Genevieve Ross at 11:15 AM 2 comments:

Grandad Visits and It Snows! (finally)

Getting caught up on posting. Here are some cute pics from late February. We haven't had much snow this year but we did finally get enough to try out our new sleigh. 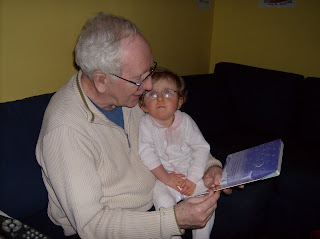 Grandad and Zoe reading a bedtime story. Grandad came for Zoe's birthday and is still visiting. He has been busy trying to finish insulating our basement headers while balancing getting enough play time with Zoe. 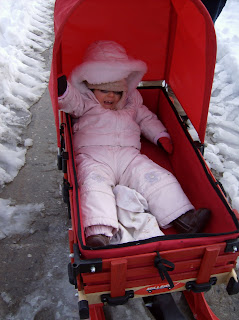 Zoe laughing her head off in the wagon/sleigh. 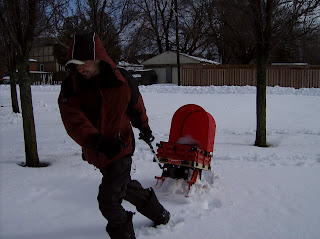 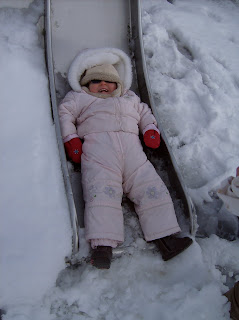 And of course, no trip to the park is complete without some sliding time.
Posted by Genevieve Ross at 10:41 AM No comments: