So Big and Yet So Little

Zoe has grown so much and is mature in new ways and yet, when she is tired or sick she still seems so little to me.  She is still my baby girl. 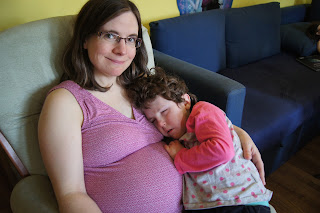 Zoe has had a rough couple of months.  She recovers from one illness and then is hit with the next.  Thankfully, none of her hospital stays have been long (only a week at a time) but every month since February, Zoe has had a hospital stay. 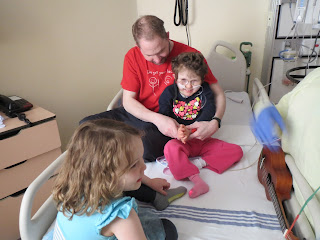 Happy Birthday Ailsa!  Ailsa turned six during Zoe hospitalisation last week.  Since Zoe could not be home with us, we brought the party in to her.  Even the clown stopped by to sing just for Ailsa.  She was so excited that the clown came to see her, not Zoe this time.  Even though Zoe ended up having seizures during her party and was not well, Ailsa still managed to have a good birthday and feel special.  At the end of the day, Ailsa said, "This was a wonderful day."  So I guess Gavin and I are doing something right!

This last hospital stay was a bit scary.  Zoe had to be "loaded" with seizure medication two nights in a row in order to stop seizing.  Zoe was having clusters of seizures- she would seize for a minute and then start to come out of it for a minute or two and then slip right back in to another seizure.  This went on for an hour.  The doctors tried a less sedating seizure medication initially but it did not work and they had to use IV medication instead.  Zoe has not had seizures like this in years.  In fact, we can not even remember if it has been 3 or 4 years it has been so long.  We are hoping this is not becoming a pattern for Zoe again.  When Zoe had cluster seizures like this in the past they turned in to "status" seizures which means she seizures constantly for over 30 minutes.  Her longest seizure was 75 minutes but it felt like it went on for hours and hours.  So we really hope to not see any increase in Zoe seizures.

Also a bit worrisome is that Zoe continues to develop full body hives when her immune system is challenged.  This happened two days before Zoe started having fever from this latest cold and infection.  It seems Zoe's immune system is hypersensitive and there is nothing we can do about it other than give her antihistamines to make the itching more bearable.  Zoe is such a sweet child.  She is determined to be happy and make the best of any situation she is in.  It is heartbreaking to see her so uncomfortable.  But we do have a plan now that deals with the hives early in the outbreak and that seemed to help this last time.