Hey Curly Top- This One's For You

As you start your new round of trial drugs, we know you will be cruising the internet while waiting and waiting and waiting around the hospital.  So we hope this picture puts a smile on your face.  As always, we've got our fingers crossed and still hope for that miracle. 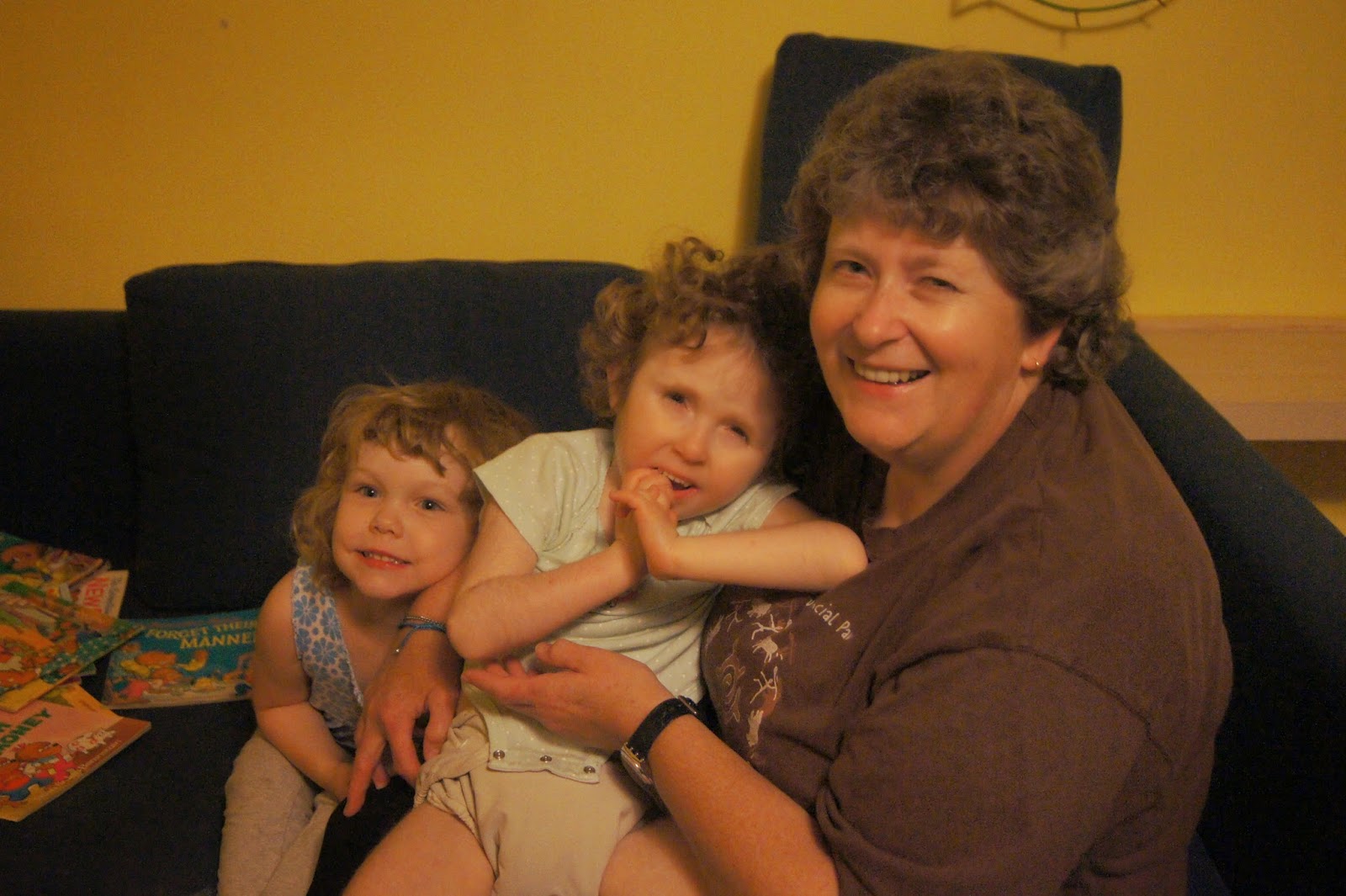 Three curly girls.
Posted by Genevieve Ross at 7:29 AM No comments:

What Ever Happened to Sleeping In???

Ok, all parents face this- children who wake up way too early.  We were spoiled for a while.  We were "lucky" that Zoe was a "cardiac" baby.  I will be the first to admit that there are some advantages to a child who spends all their energy on keeping their body going and therefore needs extra sleep.  Zoe slept a lot as a baby.  She couldn't even cry very much- would let out a squawk and then pass out from the effort.  By the time Zoe was 8 months she could cry for 7 minutes before passing out.  Yup, I am serious, just seven minutes.  I know because we timed it so we could discuss it with her cardiac team. The longer she could cry, the more excited they would get.

Fast forward to 7 years later.  Sometimes Zoe would still sleep in in the morning- get up at 9 or even 10!!!  She outgrew naps a year ago but we still implement quiet time in the afternoons where Zoe and  Ailsa pretty much play in their beds for 30 mins and mom and dad get a mental break.  If Zoe is sick, she will sleep during this time but thankfully that has not been happening as much lately.

In April of this year Gavin and I made a difficult decision to get a g-tube for Zoe.  What made us take this step even though Zoe continued to eat well was the signs of starvation we began to see in our child.  Zoe was having headaches, low blood sugar problems, she was very cranky and inconsolable at times.  On top of that, we had noticed a decline in Zoe's energy levels.  For those of you that know Zoe, she is a constant ball of motion.  So to see a slow down meant something was wrong.  We (and the doctors) worried it might be a decrease in cardiac function or even a slowing down of her body's metabolic system).  We are happy to say that since Zoe got her g-tube in August she has been a fireball of energy again!  Which means, no more sleeping in!  Not that her sleeping in let us sleep in very much since Ailsa gets up bright and early but I do miss those morning moments with just Ailsa and I.  Being the amazing wife that I am, I would let Gavin sleep while Zoe slept and Ailsa and I would have some special alone time.  Being the amazing husband that Gavin is, he would sometimes return the favour.  So now we have two energetic children early in the morning and two very tired parents!

Ok, for the record when I mentioned an advantage to having a child with major cardiac issues, that is probably the only advantage.  The rest of it- the chance of sudden cardiac death, risk of blood clots and pulmonary embolisms, the fact that your child uses so many calories just to make her heart pump and seeing your child routinely turn blue probably outweighs any advantage gained.  So while I can joke about enjoying our sleepy baby, I would give anything to fix Zoe's heart.  Because Zoe would still be Zoe without her cardiac issues.  I wouldn't fix her chromosomes but I would not hesitate to take away her heart and lung problems.

We are so excited to finally get Zoe a proper wheelchair!!!  The wheelchair stroller that was passed on to us from another family has worked well until recently.  Since the wheelchair can not fold, we had to wait to get a van before getting the chair.  Because we have such amazing people in our lives, we were able to raise enough money to make the van a reality at the end of August.  I have to say, now that we have the van I have no idea how we did without it for so long!

So now Zoe has her new chair that looks awesome- she sits up so big and tall like the big girl she is.  The chair gives her the support she needs to stay sitting on her bum instead of slumping down.  The chair also works great at school- allowing Zoe to get closer to the tables.  Our awesome vender whom we have worked with since Zoe started with equipment at the age of 2 even threw in an extra backpack that fits the chair perfectly and a sun shade which is a must for Zoe.  The government does not cover these items and anything made for special needs is ridiculously expensive so we appreciate this gift. 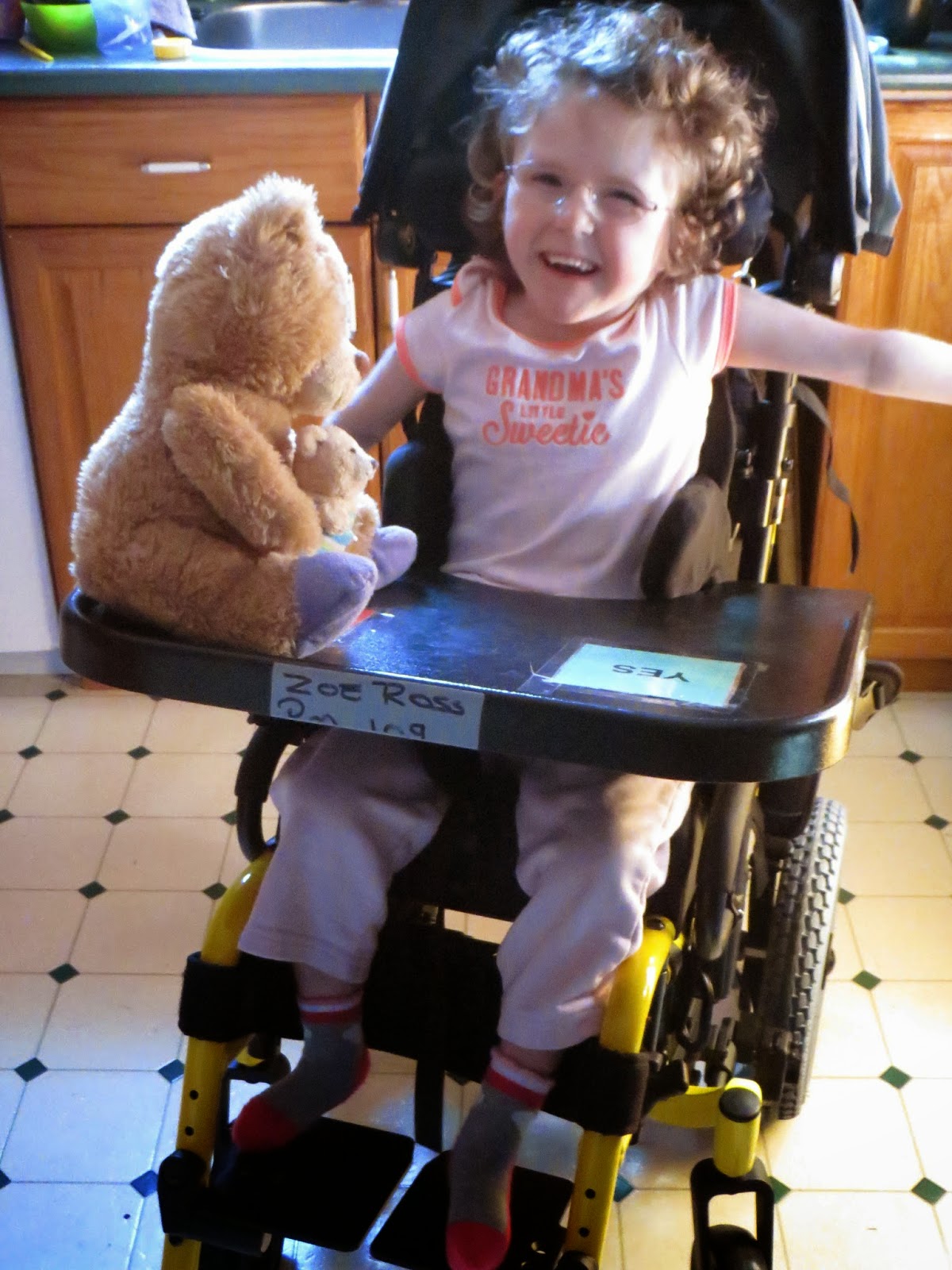 To Blog or Not to Blog

We have noticed a decline in people writing on and reading blogs.  The world seems to have gone the way of face booking, tweeting, instant messaging, etc.  So why bother with a blog?  I myself like reading blogs, things appear in order, you can scroll down and look at old posts without face book jumping around and rearranging past messages randomly.  The blog also serves as a time reminder for me- I can scroll through and look at the past years and see just how far we have come.  Admittedly, the blog takes more energy to maintain, more time to post on.  But I kind of like this rather than posting every random thought that passes through my brain.  So for all of you out there, if you do follow this blog- have no worries.  We Will Blog On!  And for those of you who have blogs that we follow- we will keep reading.  And for those of you on Facebook who keep telling me I need to get an account- I am sorry but I am just not ready for that commitment.  I enjoy my life of less technology.  Who knows, perhaps someday...just not today.
Posted by Genevieve Ross at 7:51 AM No comments: 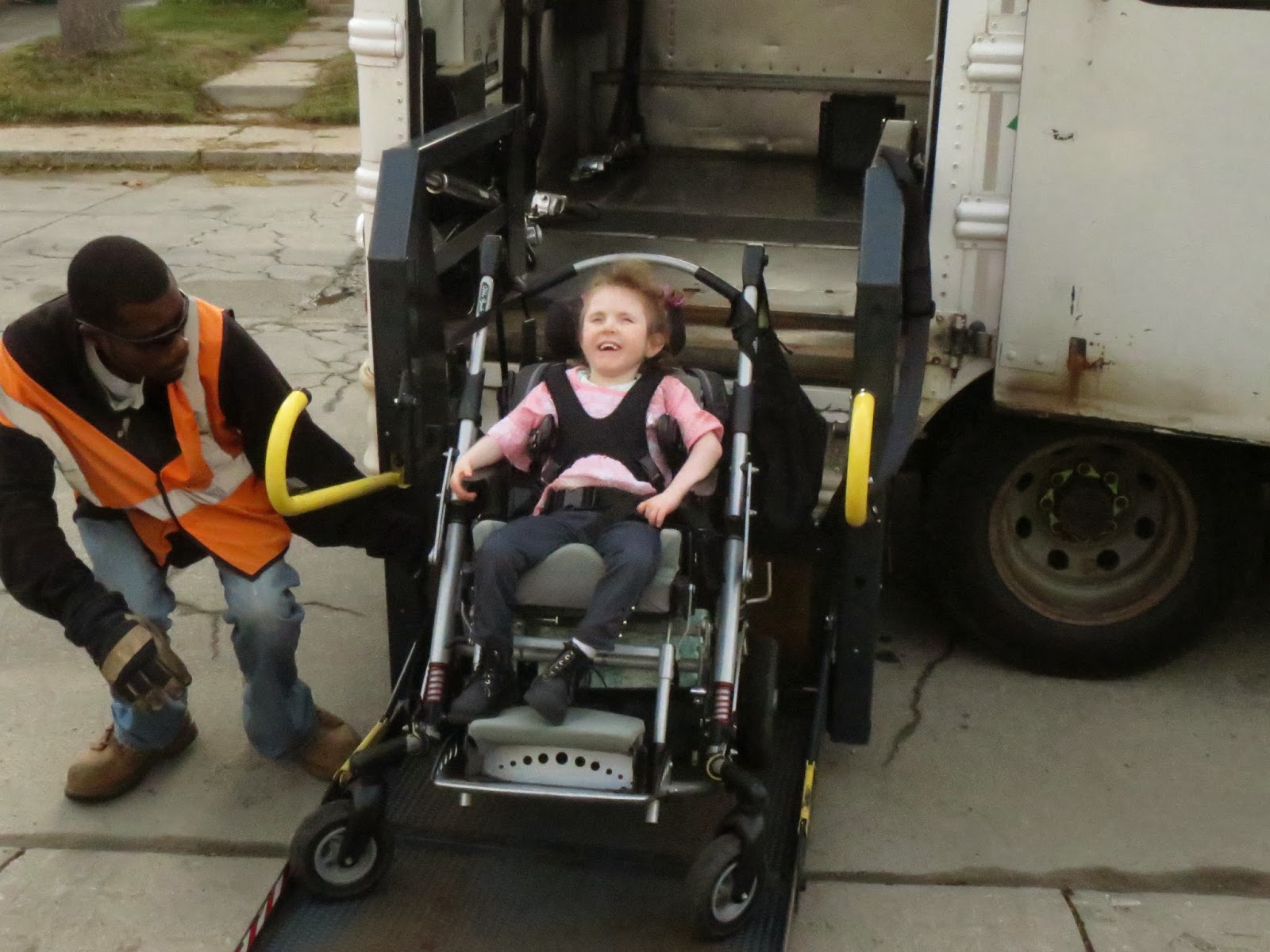 Zoe was very excited the first day back to school!  Zoe has a new teacher this year and so far it seems like it is going to be a great fit.  The teachers are able to include lots of body movement breaks for Zoe as well as lots of physical activity so Zoe is loving school.  Zoe also has a Hopsa sling in her classroom- Zoe loves the Hopsa!  The Hopsa is a body sling (think Jolly Jumper) that is on a track so Zoe can move all over the classroom independently and get right up to things to explore, learn and play.  Zoe loves spinning and jumping in the sling- things she can not do in her walker.  School is also looking at getting Zoe a new walker for school.  The one she had been using for the past few years is just not working well for Zoe.  We brought her Mustang walker in from home and everyone was amazed at how well Zoe is able to walk in it and how upright she keeps her self now.  So hopefully we will be able to figure out a great solution for school so we do not need to send the walker back and forth every week.

Ailsa moved in to the bottom bunk in Zoe's room.  We were holding off with the move since Zoe is still very restless in the night.  However, Ailsa decided she it too big to keep sleeping in our walk in closet.  So Ailsa moved in to Zoe's room last week and is loving it.  She is so proud, she keeps telling everyone about it.  Luckily, Ailsa is a very heavy sleeper because Zoe has continued kicking and crying in the night but so far, Ailsa has slept through it all.  So it looks like this might actually work.  We love seeing the girls share a room.

Getting Ready for the Fall

It's that time of year again- time for all sorts of colds, coughs and pneumonia!  Ailsa has a nasty cough right now that I suspect is the enterovirus everyone is talking about.  It is just a cold to kids like Ailsa.  A nasty cold- she has been coughing and mucousy for over a week now.  But it should hopefully just stay a cold.  Zoe actually had enterovirus three years ago and ended up in hospital with pneumonia.  So far she has not caught what Ailsa has so even though the virus this year is a different strain, hopefully having had it before Zoe will be immune.  We shall see. 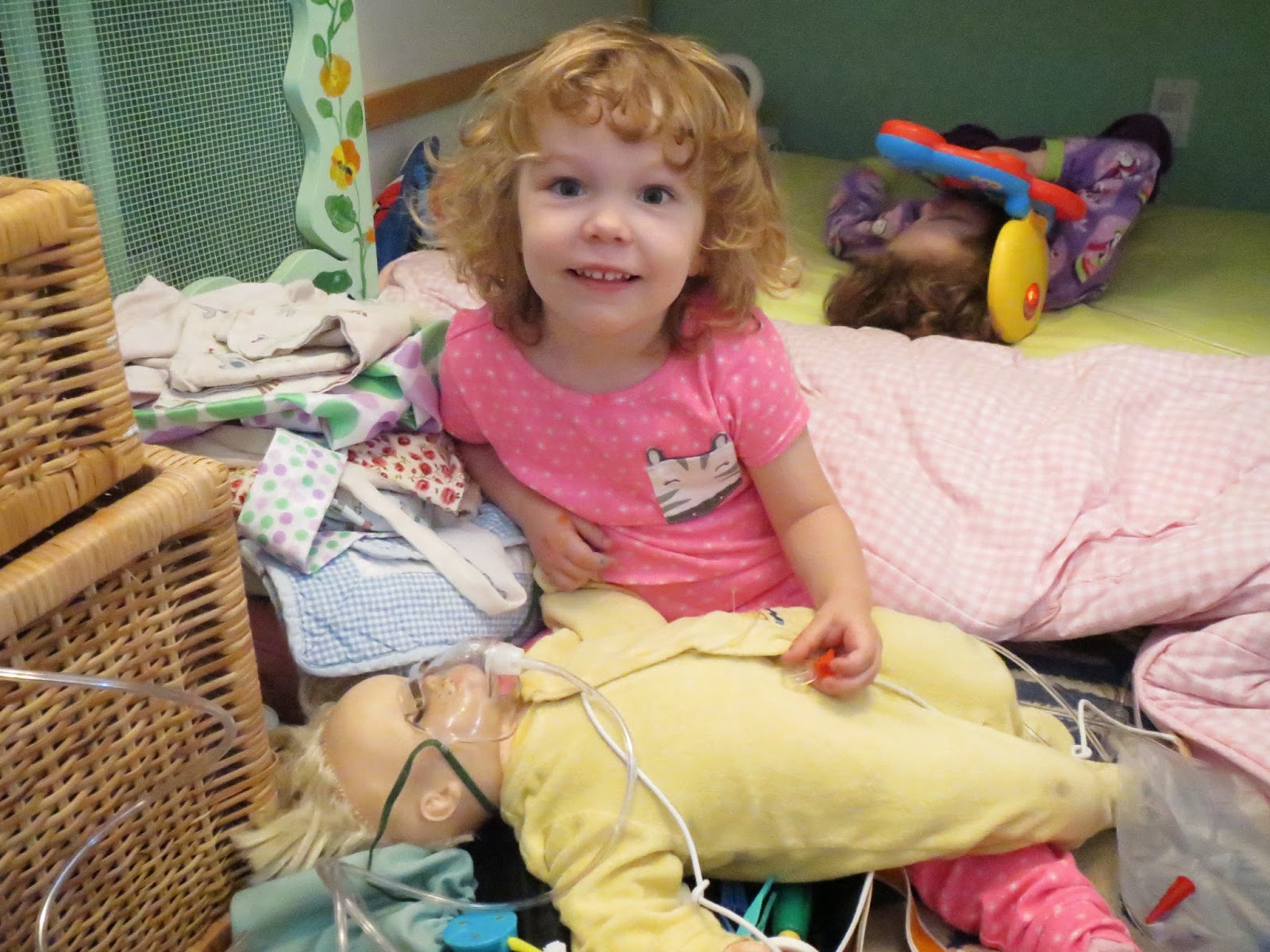 Apparently "baby" woke up with congested lungs this morning and a round of chest physio did not clear her out so she had to get "the mask."  The other "patient" Zoe is getting her tube feeding on Ailsa's bed while Ailsa tends to the sick baby.  At one point Ailsa asked for medicine and I handed her an empty prescription bottle and she said, "Z-O-E.  Mom, this medicine is for Zoe.  You can't play with REAL medicine!"  In my defence, the med bottle was empty!
Posted by Genevieve Ross at 12:01 PM No comments: