We are leaving today for the 1p36 Conference in Salt Lake City. We are very excited to see everyone again and meet new families. They have some great things on the agenda this year like a moms' night out and a dads' breakfast. We have some family time planned for after conference and I am really looking forward to that. Gavin has been working so much that we haven't had much time lately except our camping trip a couple of weeks ago.

It has been neat to see the effect of packing on Zoe. Previously she didn't take much notice of that type of activity but on Sunday when I was packing, Zoe was getting really upset. I realized that she thought I was going somewhere without her so once I explained what I was packing and that our trip was in a few days she kept getting so excited but then upset at the same time. Upset because she won't be at school for a couple of weeks. But she kept signing, "mom, dad, Zoe" and getting so excited. It's going to be a great trip.
Posted by Genevieve Ross at 1:16 PM No comments:

Ok, I admit this is probably just an excuse to post some more cute pictures....but someone commented on the backpack and I just wanted to show how hilarious Zoe used to look in the carrier. The carrier was bigger than Zoe! It also weighed almost as much as her. We bought it when Zoe was six months old when we knew we would be doing a lot of walking on our trip to England and Scotland. Gavin's family is from there so we went over to show off "the bonny wee babbity" and visit the relies. We were hoping that Zoe would be able to nap and it would be more comfortable than carrying her in a sling. We bought this particular pack because it is pretty light weight and can carry a child up to 23kg/50 lbs. We figured that will last Zoe a while. Zoe actually screamed her head off the first few times she was in it. I think people were wondering why we were squashing this "newborn" (we got that a lot with Zoe in the first year) into a backpack. 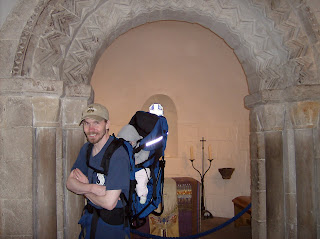 I love this picture because it shows how little Zoe was. More backpack than baby. 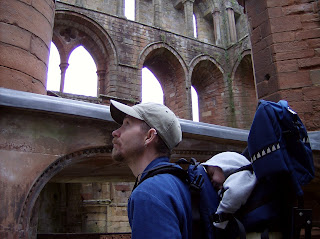 And you can see in this picture that she really was comfortable in it. She would fall asleep in the pack for hours. Because she stops wiggling when sleeping we had to dress her in a sweatshirt because her hands would turn purple due to her poor circulation. We didn't realize this wasn't "normal." We thought it was normal for a baby's hands and feet to be bright purple at times. It wasn't until someone pointed it out as a cardiac symptom that we thought there was anything wrong with it. 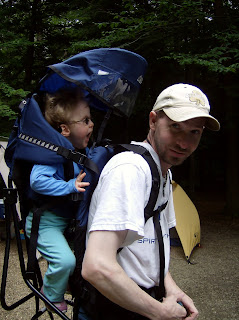 And here is Zoe at almost 3 1/2 years old. She doesn't sleep in the carrier now. She is too busy yelling at daddy to go, go, go!
FYI I do actually carry Zoe at times (and yes, Rachel Coleman is definitely an inspiration for me to be in shape so I can carry my child as she grows bigger). I just like the pictures of Gavin better :)
Posted by Genevieve Ross at 9:09 PM 2 comments:

We decided to go to Chapman State Park in Pennsylvania this year for a few reasons. Mainly because I have always wanted to camp in the Allegheny Forest and also we invited some friends and family from PA to join us. Unfortunately they were not able to come. But we still had a great time.

We were quite impressed with the handicap access of the park in general. Specifically, there was a totally accessible washroom including a change table that was set up between the men and women's rooms. Which meant we could both be in the shower with Zoe. We typically both take her into the bathroom when giving her a shower at camp (it is not safe to shower Zoe alone anymore because she arches and wiggles so much) but usually we have to sneak into each other's bathrooms. This time we could take our time and enjoy the facilities. There was also a wheelchair dock and steps down into the lake. Zoe had a great time walking up and down the wheelchair accessible sidewalk/dock area. We were camped near the fully accessible sights so Zoe could walk along the flat area of the road. She was even able to walk up hill a bit. Her walking has really come along in the last few months. 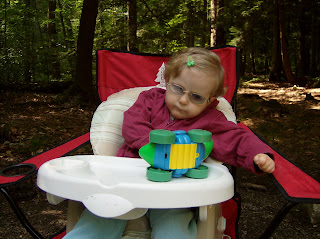 Zoe hanging out at camp. Yes- we brought that highchair! Been using it for three years now and it still works well. It is great because it is so small and portable. As you can see, it also doubles as a play chair. 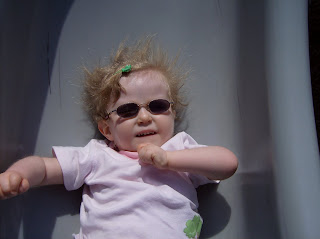 Zoe's static hair after going down the playground slide. 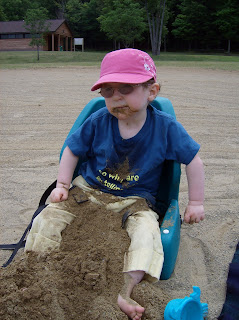 Zoe doing what she loves- eating sand. It has actually become a bit of a problem because she has the fine motor control to get a lot in her mouth now. She is sitting in her flip 2 sit. We love her new chair- makes so many things (like playing in the sand) much more accessible. 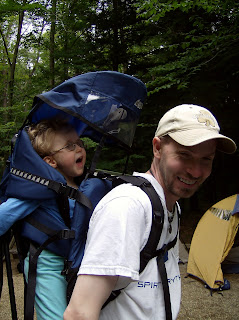 Zoe LOVED bouncing along in the backpack. She got quite a bit of reflux (aka puke) from all the bouncing but really enjoyed it anyway. Puking has never stressed Zoe out so we just wiped it up and kept on walking.
Posted by Genevieve Ross at 9:17 PM 3 comments:

The Year of F

While reading Rachel Coleman's (from Signing Time) blog post about making 2010 the year of ...

I decided to make this the year of F. All sorts of Fun things start with F.

First I want to say a big Thank you to our Friends Riann and Melissa. A week or so ago they offered to take Zoe for the night and we quickly said "yes!" As I have posted before, Zoe's sleep issues have escalated in recent months and we are exhausted.

Melissa lives in a condo and therefore booked us a guest suite. Her and Riann cooked dinner and then kicked us out. Riann knows Zoe very well since she used to be Zoe's respite worker. So we were totally comfortable leaving Zoe with them for the night.

Thank you- we really appreciate the support!!!!!

We have definitely had lots of Fun this year so far. One Fun development has been Zoe's advance in communication. Although she still only uses about 20 signs, she gets her point across and even tells jokes!

While getting Zoe ready for bed, I was talking about how I would bring Zoe to school in the morning. Zoe responded by signing "daddy." I then explained, "Daddy will be at home tomorrow and I will bring you to school."

Zoe then did a series of signs that amazed us:

Zoe, did you just say, "Daddy will be sleeping and you will go to school to play with your friends?"

Friends is a new sign and as Zoe signed it she actually held her hands up to look to see if she interlocked her fingers the right way.

I encouraged Zoe to tell us more but she just smiled and signed,

I think it is hilarious that Zoe will always sign "daddy sleeping" if Gavin is at home. As if that is what he does all day- he wishes!

Zoe has told some jokes in the past by saying something is the opposite. Examples: a co-worker of mine has a very small dog and Zoe laughs while signing "cat." And of course after Gavin shaved she loved signing "daddy girl."

The other day Zoe told this joke:

She is definitely a funny little girl!

A big part of the year of F is definitely Family. We just took a family camping trip for five days and it was great. Zoe is quite the camper. She did great most of the days and was not too stimulated from being outdoors. I will go through the pictures later and post some. Of course it is always hard to pick one or two since she looks so darn cute in all of them!

Posted by Genevieve Ross at 2:19 PM No comments: