Sisters, In Sickness and In Health 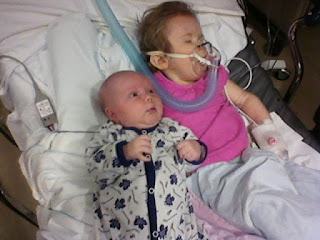 July 2011- Ailsa with Zoe in the emergency room just before Zoe was transferred to the Critical Care Unit.  Zoe was restless and settled down as soon as we put Ailsa in bed next to her. 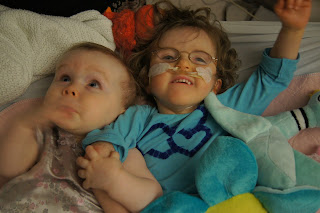 Zoe's Birthday, February 2012- Zoe had another rough stay in the Critical Care Unit and was moved to the regular floor just before her birthday.  Zoe was pretty tired and not feeling great but as soon as we put Ailsa in bed next to her, Zoe smiled. 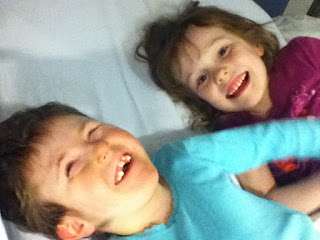 March 6, 2017- Zoe had to return to the hospital and was readmitted for a bladder infection and needing oxygen again due to yet another viral illness (Zoe tested positive for two respiratory infections this time!)  In the emergency room, Ailsa had watched, held Zoe's hand and hugged her while she had a catheter inserted in her bladder and needles poked in her chest and arm.  Ailsa knew that Zoe would feel better if she hopped in bed with her after.  Ailsa climbed in bed with Zoe and she immediately started laughing and smiling.  I hope those laughs and smiles made both girls forget the pain.

It never surprises me but continues to amaze me to see the close bond my girls have.  It breaks my heart when Ailsa cries and misses Zoe (and when Zoe misses Ailsa) but I am so glad that the girls continue to have such a great relationship despite age difference, disability, communication differences, illness, etc.

Zoe is home now.  She spent the week at the hospital but has been home this week for March Break.  We were supposed to go away for part of the week but with Zoe just out of hospital and needing lots of rest, we decided to stay home and have a "staycation."  Although Zoe is having a lot of chest pain and needs extra sleep, we have still managed to go out and do some fun things- skating, going to a movie, puppet show at the library, etc.
Posted by Genevieve Ross at 9:57 PM No comments: