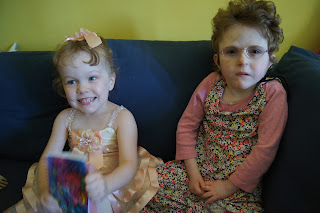 I may have mentioned before, once or twice or a hundred times, that my girls have a special bond.  Ailsa was so excited that Zoe got out hospital last Saturday- the day before Ailsa's recital.  All week Ailsa was worried Zoe would not be able to make it.  We planned on asking for a day pass...or just taking Zoe out of hospital against orders if it came to that!  But it turned out Zoe was at home and we could all enjoy the day to celebrate Ailsa.  Ailsa kept saying, "This is my special day!"

Grandad, Alison and Lyn joined us for the recital.  Zoe loved all the music, lights and dancing.  Mid-way through we had to stop to give her a morphine dose but as soon as the pain subsided, Zoe kept on dancing!  After the show, we went out to Boston Pizza (Ailsa's choice) for a special lunch/ early dinner.  Ailsa wore her costume the entire time (as well as the following three days to school!)  It was great to have that day as a family.  It was an awesome day!

Speaking of Another Awesome Day from May

When asked where Ailsa wanted to have her birthday party, she looked at me and said, "With Zoe of course!"  So we had a full on party in Zoe's hospital room!  Zoe was not allowed to leave her room but that didn't mean we couldn't throw a party! 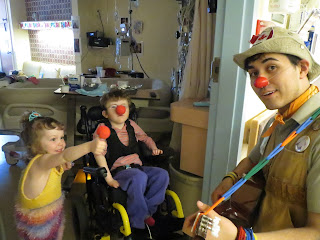 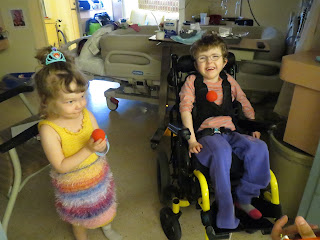 Zoe found it hilarious to pull her nose off and laugh at Ailsa. 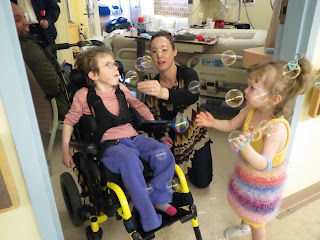 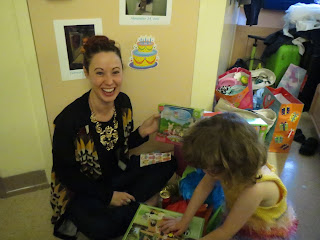 Someone was excited to give Ailsa her gift... 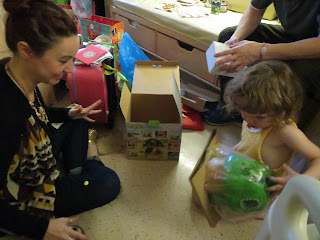 ...and someone was SUPER excited that Alison got Ailsa the critters playhouse! 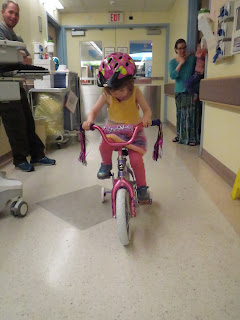 Ailsa got a big girl bike for her birthday and rode it for the first time in the hospital hallway.  If you look very closely, you can see Zoe signing, "Ailsa" while we cheer her on. 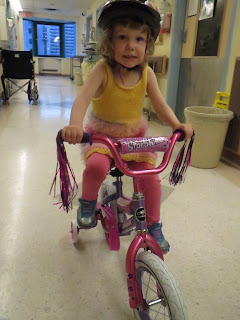 Ailsa soon mastered the bike and rode it all around the hospital.  We stayed at a local hotel for two nights so Ailsa could be close to Zoe and we could all spend some time as a family.  Family time can be difficult to find sometimes.  Ailsa loved sleeping at the hotel the first night with mommy and the second night with daddy.  And of course swimming in the pool was lots of fun!

Too Much Time In Hospital

We've spent so much time in hospital lately that I feel like we should start listing this as our address!  Zoe has spent more time in hospital than home.  She was so excited to get discharged two weeks ago after a month stay.  She was ecstatic about returning to school.  She got to go to school all last week and two days this week, so I guess that is something.  But here we are, back in hospital with yet another bladder infection.

As I mentioned in my last post, Zoe's infections are a bit more complicated now so we are waiting to see if we can switch from IV antibiotics to oral.  We were hoping to head home today but that is not looking hopeful at this point.

As always, Zoe does amazing with all of this.  She makes the best of the moment.  But she is starting to get a bit frustrated.  She keeps saying she is sad and mad and wants to go to school.  It is a good sign she is feeling better but it breaks my heart that she has such a simple wish that I can not grant.  Zoe has been communicating more with her iPad with the hospital staff directly which has been great.  She can talk to them about her wishes for her treatment.  Zoe has been advocating herself for more pain medication so we know her pain has been pretty bad lately.  Staff have been very patient talking with her as she takes time to find what she wants to say.

Zoe and Ailsa remain very close.  All of these hospital stays has really affected Ailsa.  She worries about Zoe.  She has had a lot of questions about death and dying lately, trying to figure out the difference between Zoe being dead and Zoe being in the ICU on a breathing machine.  Gavin and I let Ailsa talk about whatever she needs to and we answer her questions as simply and honestly as we can.  Even when she brings up topics we rather not talk about.

When we were headed to hospital earlier this week, Ailsa ran up to Zoe and gave her a gentle kiss and hug while saying, "Hug.  Strings attached" while pretending to link a string to Zoe's heart.  The palliative team gave us a book about how the people we love are attached to us with invisible strings so even when they are far away, we are still attached.  This concept has brought a lot of comfort to Ailsa.

As Gavin, Zoe and Grandad pulled away headed to hospital and Ailsa turned to me and said, "Let's read a book about dead things" I sucked back my tears, gave her a big hug and carried her inside.
Posted by Genevieve Ross at 10:48 AM 2 comments: