We had an amazing summer this year.  In March we bought a 25 foot motorhome.  The motorhome is big enough to have three beds and a much needed bathroom but small enough to fit in to most campsites and is easy to maneuver.  We love camping and have a family tent that is big enough for all of us.  However, Zoe's bowel flush takes at least an hour and now that she is 14 years old, she needs her privacy.  (The "poop" tent idea was ok in theory but had it's issues when put in to practice two years ago).  So I began researching RVs.  For those of you looking at motorhomes, we only found a few models that had car seat anchors.  And only two models that had three point seat belts and car seat anchors.  I was very surprised that seats in motorhomes do not have to be certified because they put "positioning belts" in them, not certified seat belts.  So our search was quickly narrowed and luckily the model we wanted is a Canadian brand so that made finding and buying it a lot easier.  We were fortunate to find a 3 year old motorhome that didn't have too many kilometres on it and is in great shape.

We spent over half the summer camping this year and it was awesome.  We went to 12 different provincial parks and one national park.  And we have a few trips planned for the fall before it gets too cold.  The RV has a propane heater and enclosed water pipes so we can camp comfortably in the fall and spring.  We could even try winter camping but it gets a little tricky because there wouldn't be anywhere to dump the water and waste tanks.  Also- Canadian winters can get very cold!  For now, I am very excited to be able to camp in spring and fall.  Because of Zoe's poor circulation she gets cold very easily so in the past we were only able to camp in July and August.  This year we started camping in April and haven't stopped yet!

One of the positive things about Gavin being ill was that he was off of work most of the summer.  Initially he was very tired and recovering but as he began to feel better but not yet approved to work we were able to go on some awesome trips.  We even went on a three week trip from home to the Thunder Bay area. 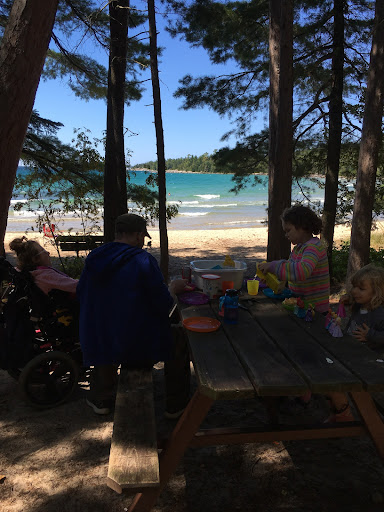 We couldn't believe there are such clear, blue-green lakes in Ontario! 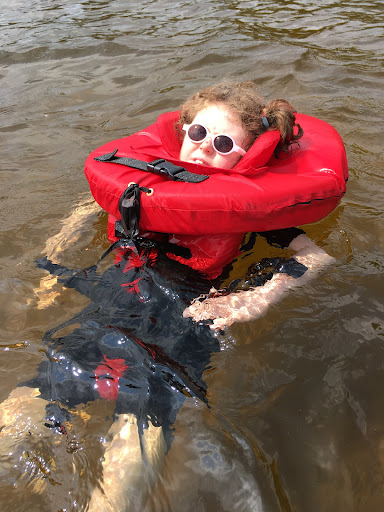 Zoe loves swimming!  Zoe's poor circulation means she gets cold easily in the water but her wetsuit keeps her warm so she can swim for longer periods of time.  This life vest had been amazing for Zoe- she loves swimming independently. 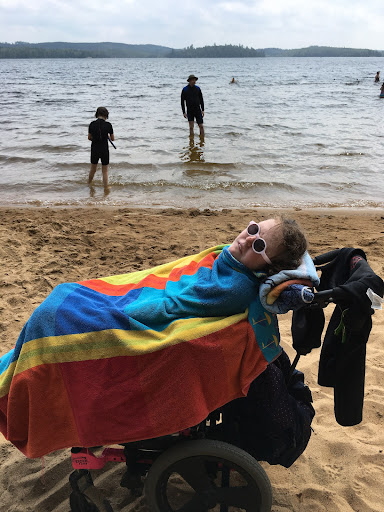 Zoe warming up in the sun while Ailsa and Gavin keep on swimming. 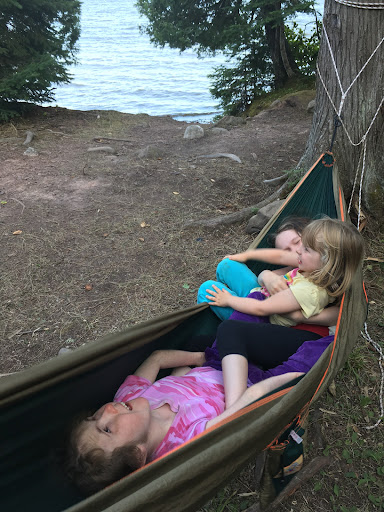 Our campsite at Sleeping Giant Provincial Park was amazing.  We stayed at a remote site that is across the lake from the main campgroup.  We had a large site right on the lake.  Our motorhome has solar panels to recharge the batteries so we do not need to stay sites with an electrical hook up.  We can stay in any type of site. 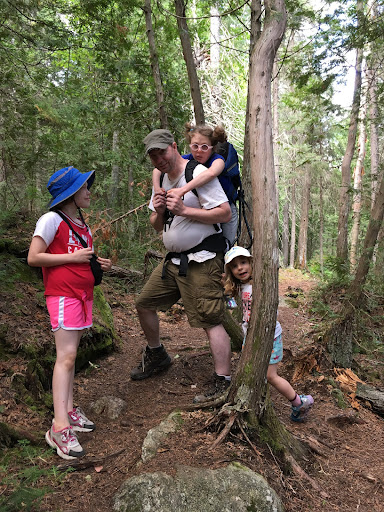 We modified the hiking backpack so Zoe can still fit in it.  This is great for trails that are not wheelchair accessible.  We realized this year that we might have to stop carrying Zoe soon- she's half my weight now and her feet hit the back of my calves! 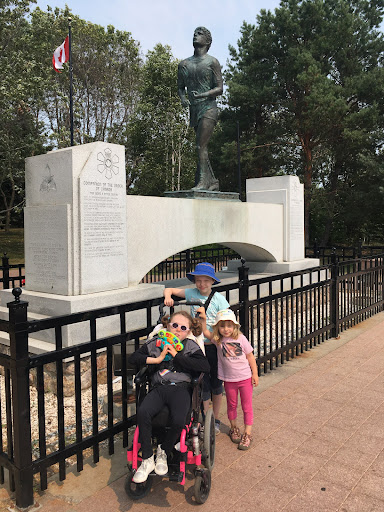 Ailsa had asked to visit the Terry Fox monument last year which is why I started planning this trip to Thunder Bay.  This stop was meaningful for our whole family but especially Gavin.  Terry Fox meant a lot to Gavin when he was an adolescent with cancer.  Gavin has how many miles Terry ran tattooed on his back.  After thinking he could never have children because of cancer, taking our family to see the monument was very special. 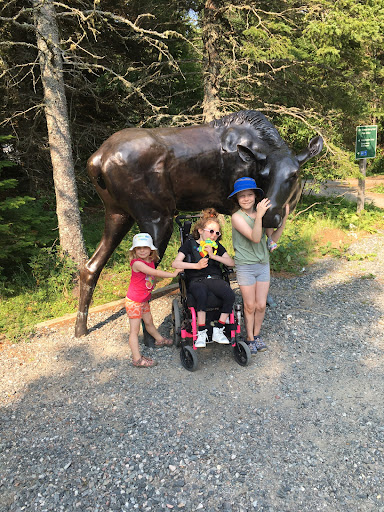 Pukaskwa National Park was beautiful.  They had some great accessible trails and beutiful beaches. 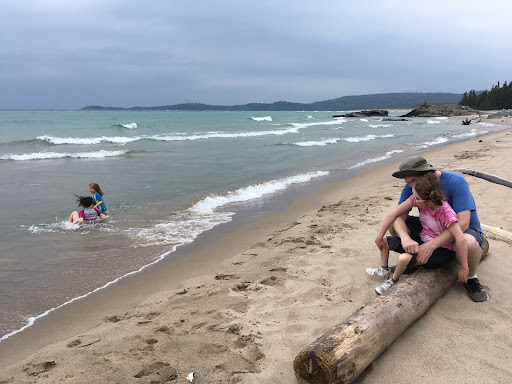 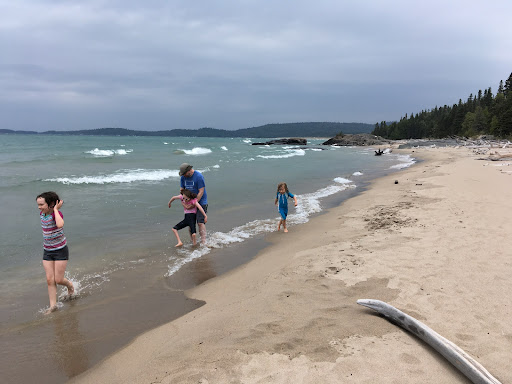 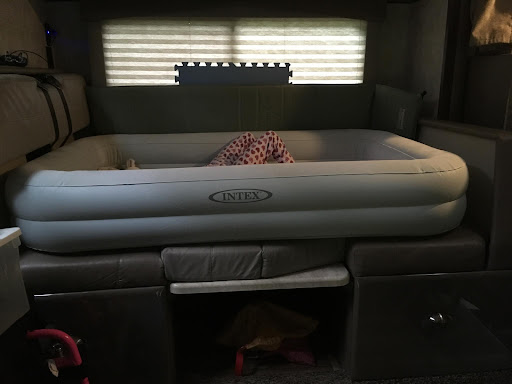 At a 1p36 conference years ago someone mentioned this blow up bed as a travel bed for children with special needs.  We would put Zoe on the floor when travelling so she would not roll off the bed.  But as she got stronger and rolled more this became a problem because we would find she had rolled under the bed, next to a heater or even in to the bathroom while we were sleeping.  This Intex "toddler travel bed" from Walmart has worked so well for us.  Zoe even uses it when she is in hospital- it fits the hospital beds perfectly.  And it just happens to fit the RV dinette bed perfectly too.  This prevents Zoe from rolling out of bed.  Thank you to whoever it was that told us about this bed!  We've learned such great advice just chatting with other parents.
Posted by Genevieve Ross at 12:11 PM